Why nobody goes to Marlins games

Exploring the major changes coming to Marlins Park in 2019...and the obstacles still facing the team.

If you buy something from an SB Nation link, Vox Media may earn a commission. See our ethics statement.

Share All sharing options for: Why nobody goes to Marlins games

It’s easy to get swept up in the excitement of the Marlins’ rebuild. You have a leadership group that is attempting to represent Miami more authentically than the old regime ever did, with a coherent talent acquisition philosophy that could finally bring an end to this insufferable postseason drought.

But outside of our little bubble, the Marlins are still a punchline.

Through the years, even with the benefit of a new facility and factoring in the relatively small seating capacity, their home games have been poorly attended. The 2018 season, in particular, was a relentless barrage of attendance jokes. The Marlins changed their counting methods to be more transparent, rather than distorting reality like Jeffrey Loria and Co. But damn, that reality is grim: they reported just 10,014 fans per home game (811,104 total), the lowest figures for a major league team since the 2004 Montreal Expos.

Boras points out that LSU out-drew the Miami Marlins and how bad that looks for the marlins and MLB. Boras: “The fans of Florida have certainly brought the MIA to Miami.”

That being said, the Fish cannot seriously laud themselves as a healthy franchise until fan turnout confirms that Marlins Park provides an acceptable entertainment experience. We’ll analyze the key issues that have affected fans in recent years and what needs to be done to address them.

President of business operations Chip Bowers seems to have good intentions. Based on teases from the official Marlins social media accounts and materials previewed by Fish Stripes, his rebranding campaign is driven by his constituents, and therefore being received very positively.

Of course, the current state of irrelevance has been about more than just artistic taste. This market is reluctant to trust an historically incompetent franchise, he explains to Andre Fernandez of The Athletic:

“A lot of our fans are scorned lovers,” Bowers said. “That’s just the reality of what we’re facing. They’ve been hurt time and time again. They’re not quite sure what to feel. They want to be in love with the organization, but at times, it’s hurt them, and I get that. It’s human nature. But over time we have to show fans that we’re different in our own way and we understand their pain and we’re not going to hurt them.”

During his 16 seasons in charge, Jeffrey Loria never paid market value to retain a star free agent. He got into the habit of trading the most lovable and productive players for pennies on the dollar before even facing that financial decision. In their first offseason following the ownership transition, the Marlins front office unloaded nearly every All-Star on the roster, including 2017 NL MVP Giancarlo Stanton and soon-to-be 2018 NL MVP Christian Yelich. Although these were smarter baseball moves, the immediacy of these blockbusters discouraged a significant chunk of the fanbase yearning for a different team-building approach.

Unpopular decisions are not necessarily “wrong” decisions, as long as they culminate in winning...eventually. But for the past 15 years, the Marlins have rarely participated in the pennant race, with players spending every October just like their fans: on the couch. That lends itself to a toxic product.

UC Berkeley’s online masters in data science program, datascience@Berkeley, factors on-field performance into their new study, Cheer Smarter: Using Advanced Metrics to Analyze the Cost of Being a Sports Fan. The following graphic featuring the 30 MLB teams looks at the average cost to attend a game in 2017—tickets, parking and concessions—relative to each team’s cumulative 2013-2017 winning percentage. The Marlins placed 27th out of 30, clearly on the “bad deal” end of the spectrum.

From the same research project, Miami’s 2017 expenses were comparable to organizations that had much stronger track records of winning. Exceptions like the Phillies and White Sox can more easily justify themselves in cities that have a higher cost of living.

The quality of the experience was not adequately addressed in Year 1 of the Derek Jeter era. Fans who attended Marlins home games frequently in 2018 note that food and drink prices remain excessive. Compounding that concern, many of the vendors do not provide efficient service, leading to long lines and more time away from the game action.

Reaching back far enough into their past, the Marlins are two-time World Series champions! That’s something to take pride in...right? Aside from a few special events throughout the season and small “1997” and “2003” flags near the left field foul pole, there’s no effort made to remind fans of their sweetest moments.

South Florida is full of transplants who will come to the ballpark when their team visits, but what are the Marlins doing to engage their own fans and acquire new ones?

On Tuesday, the Marlins announced the new Center Field Zone and SRO Social Section in right field foul territory. Both will be ready by Opening Day.

It’s a dramatic transformation of the outfield from when the venue originally opened in 2012: 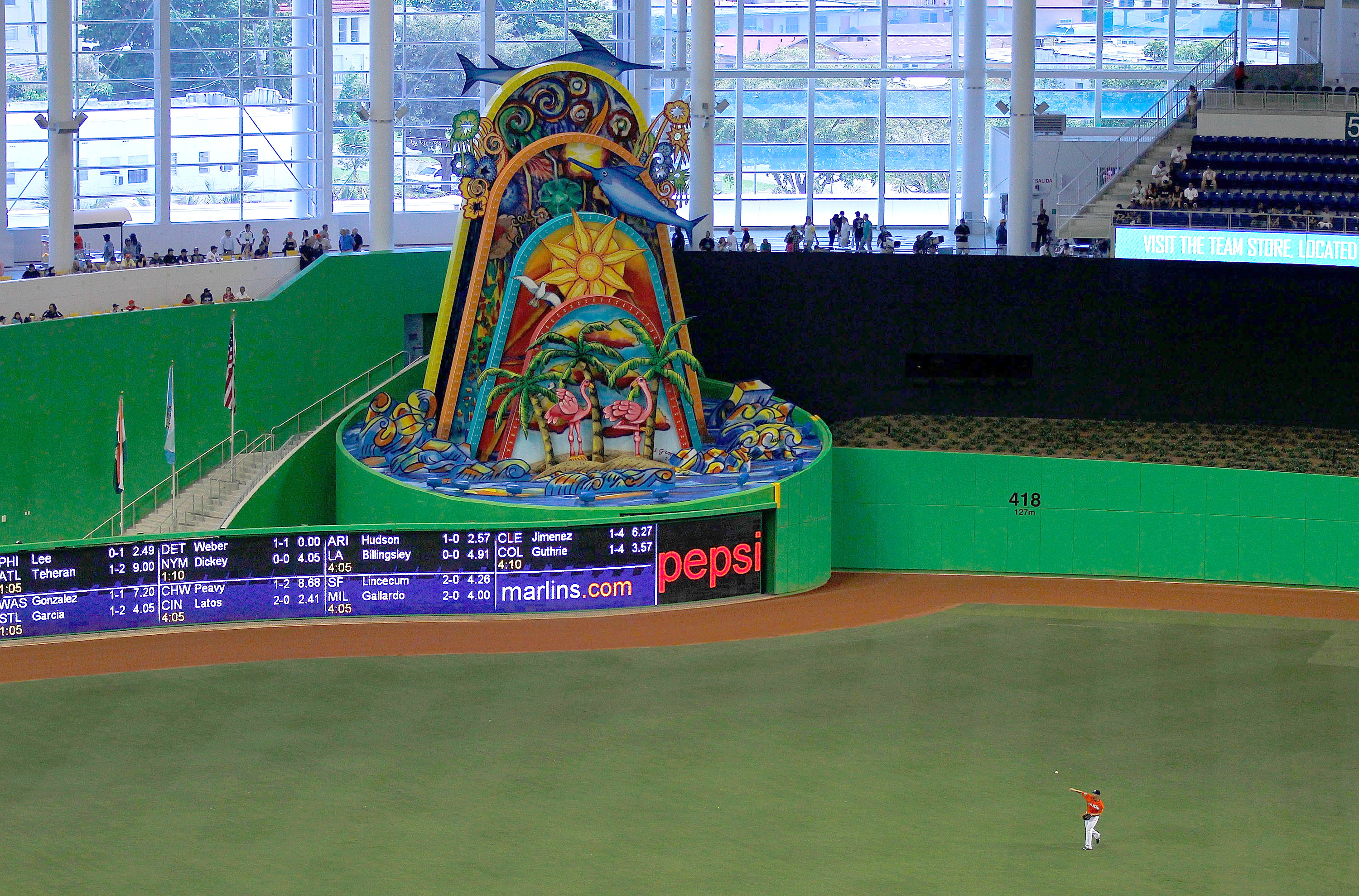 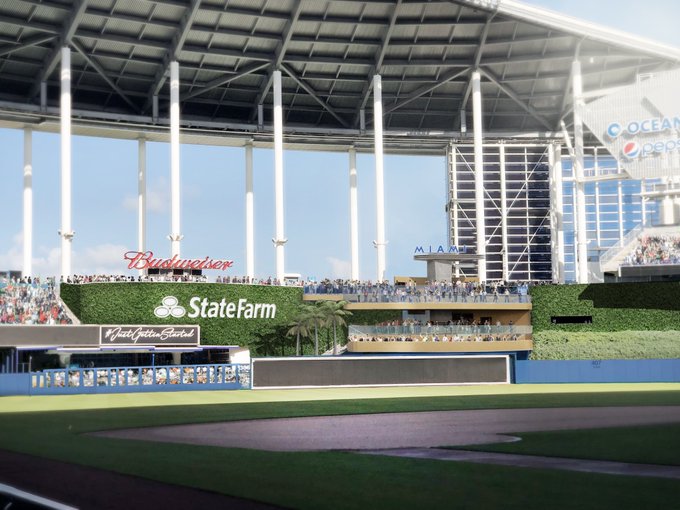 This helps reduce the prohibitive cost to attend—access starts for as little as $10 per game.

The team-provided renderings depict Marlins Park with an open roof, which improves the aesthetics. Summer humidity forces most games to be played inside, but new ownership is more lenient about the sunshine than Loria ever was, so this would be a common sight.

Polling across the Fish Stripes social media accounts shows that fans are hyped. More than 67 percent of respondents indicated that they plan to attend more games in 2019 than they did in 2018, despite expectations of finishing last in the NL East again.

However, those results may overstate the positive momentum. The Marlins continue to consider trade offers for J.T. Realmuto, their best player. It would be an upset to see him wear the new colors and uniforms in a meaningful game with so many teams desperately seeking an upgrade at catcher. Two-and-a-half weeks removed from the World Series, there is zero buzz about pursuing impact free agents. Although top prospect Víctor Víctor Mesa will be invited to major league spring training, it is developmentally and fiscally responsible to have him open the regular season in the farm system. The brand severely lacks individual star power.

It is best to ignore Scott Boras and others who exploit the attendance issue for likes, retweets and professional leverage, especially when they place the blame in the wrong place. The Marlins have been failing their community for years. Fans should not feel obligated to commit their time and money to them until the franchise earns it.