The Miami Marlins are establishing a new identity for the franchise in 2012. Gone are the "Florida" moniker and friendly confines of Sun Life Stadium as they have been replaced with the title of "Miami" and Marlins Park built on the hallowed grounds of the Orange Bowl. The Fish make it seem like all is new but this is not entirely true. Whether "Miami" or "Florida" the Marlins name has been synonymous with baseball in South Florida since 1956. What intrigues me however are the aesthetic features of the teams like logos and uniforms. Uniforms can make or break the identity of a team in the eyes of regional and opposing fans. Some teams make iconic looks through greatness like the New York Yankees, other teams through longevity like the Chicago Cubs, and some teams are a rotating door of looks like the Houston Astros. The Marlins have not been as radical however and I'd like to take a journey through the past to document the look of the Fighting Fish!

I would like to start with the original Miami Marlins of the International League. This team was relocated from Syracuse as the Chiefs and were a AAA affiliate of the Philadelphia Phillies and later the Baltimore Orioles. They played from 1956-1960 at Miami Stadium (now The Miami Stadium Apartments) with some games played at the Orange Bowl. The team colors were Orange, Blue, and White. The team home uniforms were white with a cursive "Marlins" script across the chest, blue piping around the neck cut and down the front parallel to the buttons, blue stripe near the botton of both sleeves, and a Marlin carrying a bat and wearing a cap on the left sleeve. The cap featured a block letter "M" in orange, blue base, and a version with an orange bill and one with blue. 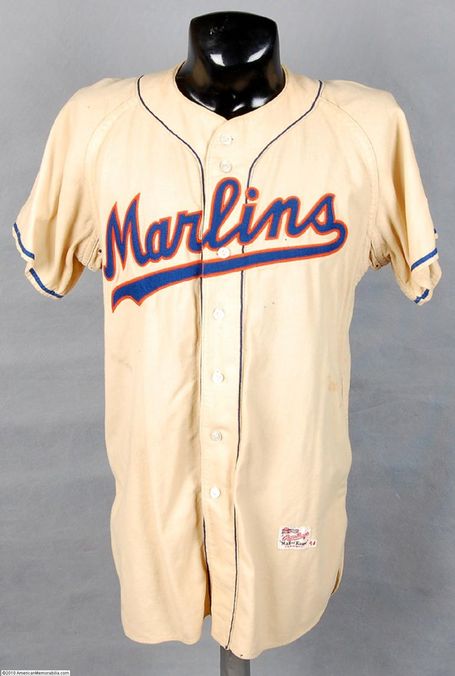 The road uniform was gray. It had a "MIAMI" script in block letters and featured the same characteristics of the home uniform save for the stripes on the sleeve which were orange. 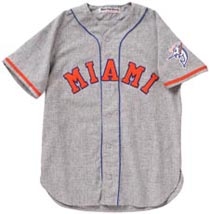 This team featured the likes of Satchel Paige for a couple of seasons but were not very successful and drew in some decent crowds at first but waned. Finally the franchise was moved to San Juan, Puerto Rico in 1961.

Miami however would not go for long without minor league baseball as a new Miami Marlins franchise was created in 1962 with the reactivation of the Single A-Advanced Florida State League team, Miami Hustlers. The team was relatively unchanged as they kept the same name, colors, stadium, logos, and uniforms. This version of the Marlins saw success as they won the FSL Championship in 1969 and 1970. The team once again was the affiliate of the Phillies and then a few years later the Orioles. In 1971 the Marlins name was renamed the Orioles to mimic the big league club. The Miami Marlins name would lay dormant until 1982 when the Orioles ended their affiliation with the Miami franchise.

The resurgent Miami Marlins changed their look slightly from their early counterparts. The colors remained the same but the home whites were given block lettering for the "MARLINS" script. The road gray uniforms changed the "MIAMI" script into a "MARLINS" one much like the home version. For both jerseys the team removed the blue piping from the neck and front along with the Marlins logo on the sleeves. The sleeve stripes were changed to an orange-blue-orange striping at the end of the sleeves. The caps were kept the same. The Miami Marlins name's minor-league run would last until 1989 when the team changed the name to the Miracle and would relocate to Fort Myers in 1992 at the advent of the new MLB franchise coming to Miami.

Since I have no photos of the 1980s Marlins we'll have to settle for the 2002 Florida Marlins who wore the uniforms to celebrate the 20th anniversary of the previous Marlins incarnation. 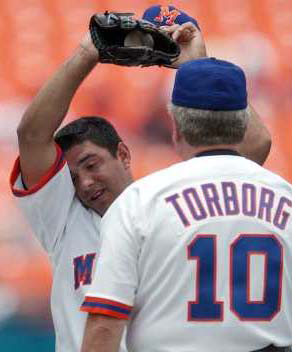 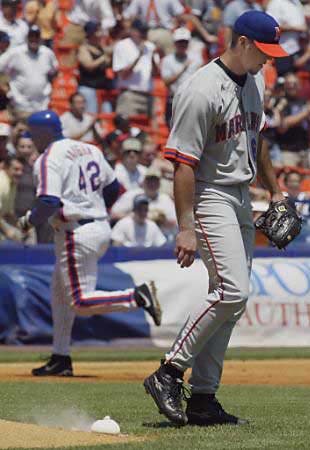 So now the new MLB franchise in 1993 became the Florida Marlins. The Florida name was chosen as the team was the state's first and only MLB franchise at the time. The colors changed as well, as the team went with teal, black, silver, white, and orange sparingly. Miami Stadium was not suitable for big league baseball in terms of capacity and it was an ancient facility in comparison to the then six year-old Joe Robbie Stadium.

The home uniform was white with teal pinstripes and 'MARLINS" script in teal with black outline. The player number was black and placed on the right below the script. The left sleeve featured the Marlins logo. The home white also came in a sleeveless version with teal undershirt (later changed to black). The road uniform was gray with "FLORIDA" in a different font and featuring a Marlins wrapped around the "F". The left sleeve featured the Marlins logo and both sleeves ends had black-teal-white stripes. The caps came in complete teal, teal with black bill, and complete black with a block silver and black "F" wrapped by a Marlin. 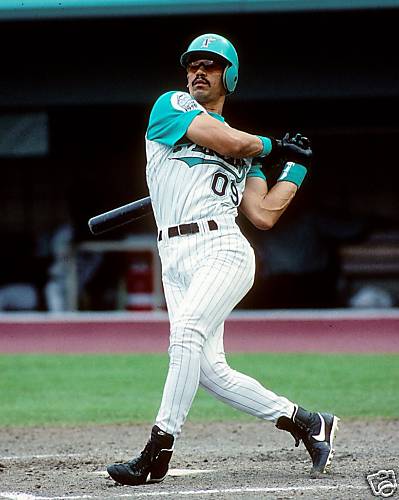 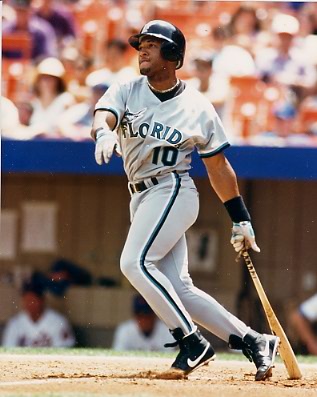 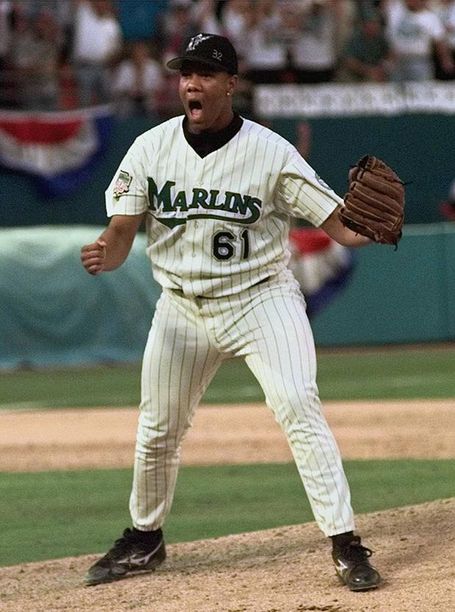 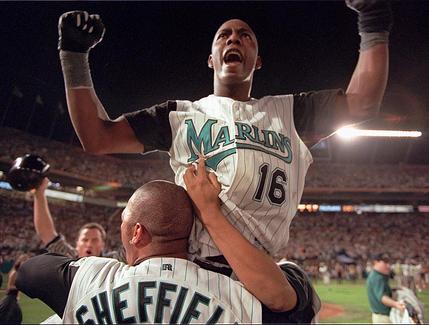 In this original stage the team won the World Series in 1997. However the team was broken up and wallowed in the MLB basement while under three different ownership groups. In 2002 Jeffrey Loria became the owner of the team and the team celebrated their tenth anniversary in 2003 with slight changes to their uniforms. The home whites used black pinstripes, replaced the Marlins logo with the "F" cap logo, and made the script black with teal and silver outline. The road unis saw the same changes as the home with the big difference from the previous jersey being the "FLORIDA" script removing the Marlin and using the font of the home script (the script would later become "Marlins"). The Marlins also replaced the sleeveless alternate with a new black alternate that followed the style of the new home and road jerseys except with silver "Marlins" script outlined in teal and black. 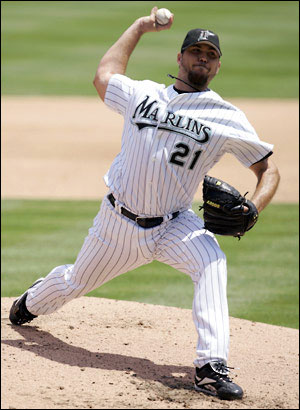 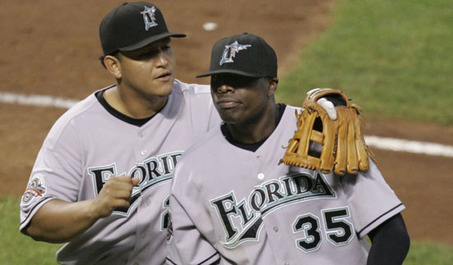 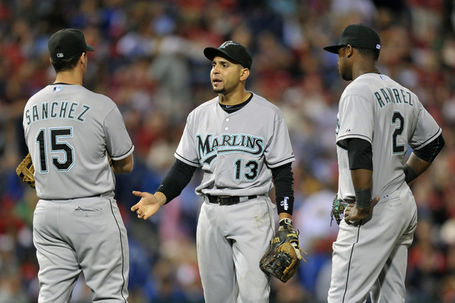 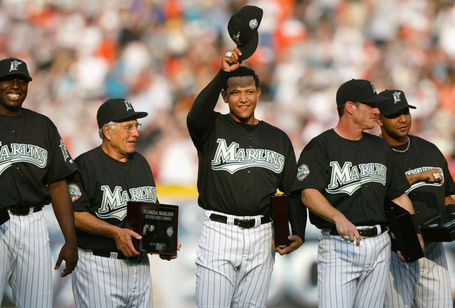 The Florida Marlins would do much celebrating in the first year of their new look as they defeated the Yankees to win the second World Series Championship. The team would remain competitive despite payroll restrictions over the course of the Florida Marlins identity though no more playoff appearances came about. Over the 19 year period the Marlins wore special uniforms to commemorate special events.

In 1999 the Marlins wore "Turn the Clock Ahead" uniforms to celebrate the upcoming new millenium. The uniform featured futuristic short sleeved uniforms in black with a giant Marlins "F" cap logo tilted across the whole front. The team also wore special black caps with a silver bill to go along with the look. 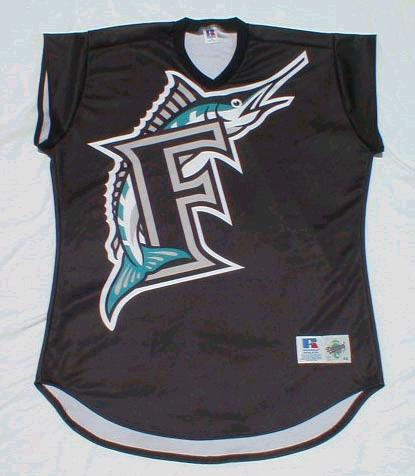 As said before the team wore "Turn back the clock" uniforms to honor the 1980s Miami Marlins in 2002. 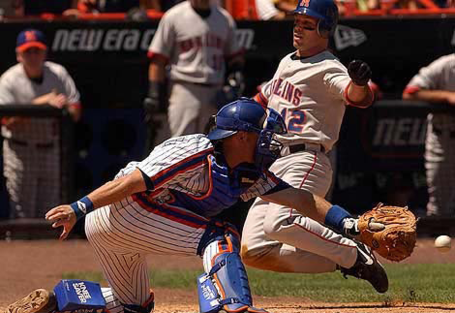 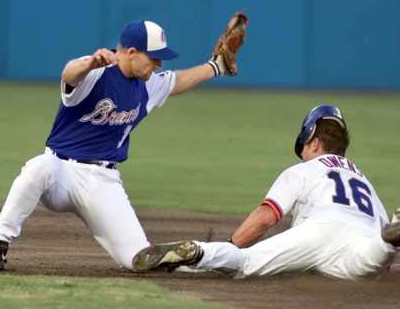 In 2003 the Marlins introduced a new home alternate which saw rare use for two seasons. This one replicated the Yankees style uniform replacing the famous "NY" logo for the Marlins cap logo. 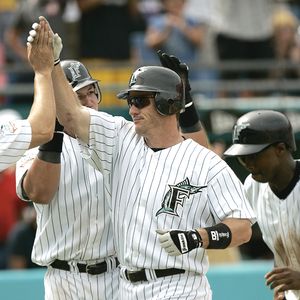 In 2007 the Marlins turned back the clock once more to celebrate their 1997 World Series title's 10th anniversary. They wore the sleeveless version the team wore when they won it against the Cleveland Indians. To rub it in to Cleveland's face more, the team did the event against the Indians. 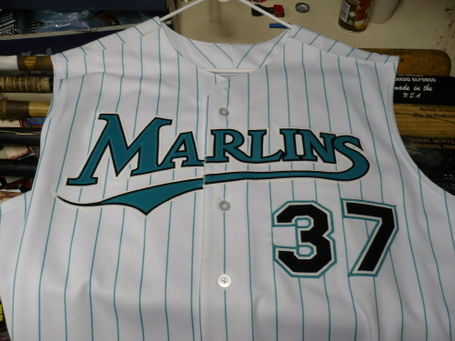 In the 2009 and 2010 seasons the Marlins wore latino jerseys for every Friday home game and a home series in San Juan, Puerto Rico. These logos followed their home designs with the addition of "Los" script above the "Marlins" script. 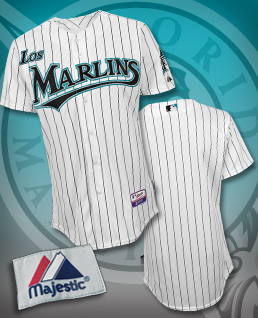 In 2012 the Marlins embraced their new identity as the Miami Marlins and massive changes were made. Not only was there a new push to spend money but their was a new ballpark built on the site of the Orange Bowl. Things have come full circle for the Marlins. Orange was returned to prominence in a red-orange shade in addition to black, silver, blue, white, and yellow. The changes were radical in use of colors and the set of new logos. The Fish uniforms were still standard fare for baseball uniforms though save for the new color scheme and logos. Pinstripes were removed from the home uniform. And a new all red-orange cap was introduced. 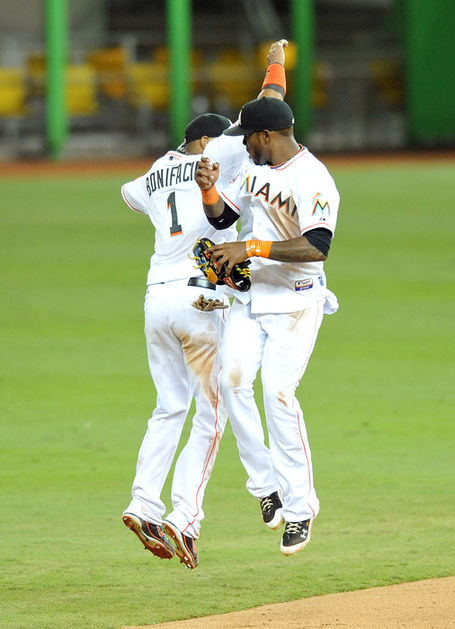 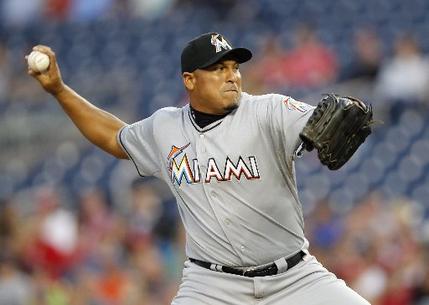 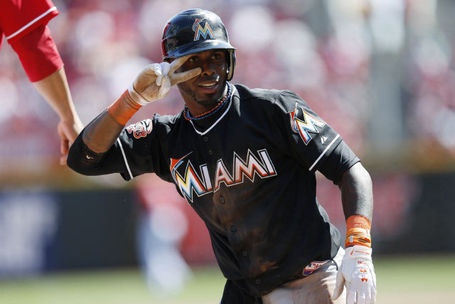 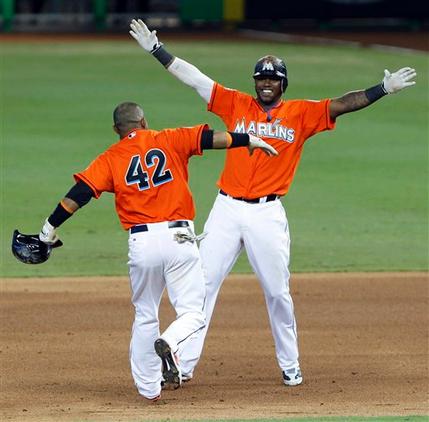 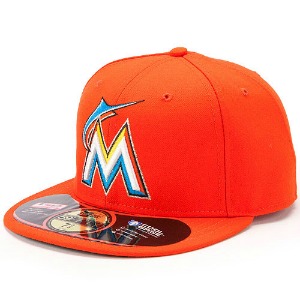 The Miam / Florida Marlins have made a lot of changes over the years, though the changes were only radical when entering new eras. The minor league Marlins stayed pretty much the same, the Florida Marlins made changes to the scheme but remained very much the same save for swapping colors around. The new Miami Marlins identity has brought a look that no other team has tried since the Astros "rainbow guts" uniforms. What will the future hold for the Marlins look? Will they "turn back the clock" to the 1950s, 1980s, 1990s, or early 2000s? The Marlins will continue to push the boundaries of what an MLB team looks like.

Which is your favorite Marlins jersey of all-time?