At the Phillies site The Good Phight, we recently published a series on the success (or lack thereof) of the Phillies' drafts and international signings over the years, as well as a more general overview of player selection. Since I hadn't seen the comparison of international signings in particular anywhere else, I thought I'd do a brief version of that for each team.

About a quarter of all current production in MLB (by WAR) is generated by players who were signed as international free agents (IFAs) — either as teenagers who then rose through farm systems, or established pros ready to step directly onto major league rosters.

This piece looks at an arbitrary time frame of 30 years, 1990 through 2019, and uses WAR (from fangraphs.com) as a quick and handy measure of major league value. The WAR shown represents a player’s total career production to date, regardless of what teams he was with at the time. All of a player's career WAR is counted for the team that signed him, in the year they signed him. Any kind of ranking like this will tend to favor the teams who were successful earlier in the period, since those players have had a chance to produce all or mostly all their career WAR.

We started with the team ranked 30th in WAR produced by its IFAs since 1990, and are working our way up. The Marlins are 9th, with 174 total WAR produced so far by their international signings over that time.

For the Marlins it would be more fair to begin in 1992, their first full year of signing players, and since then they have been 7th.

Again, each point along a line represents the total career WAR produced by players who were signed that year. As an example to illustrate, among the players the Dodgers signed in 1994, four would go on to make it to the majors, and they produced a combined total of 107 WAR (Adrian Beltre 84, Chan Ho park 23, Luke Prokopec 0, Franklin Nunez 0). 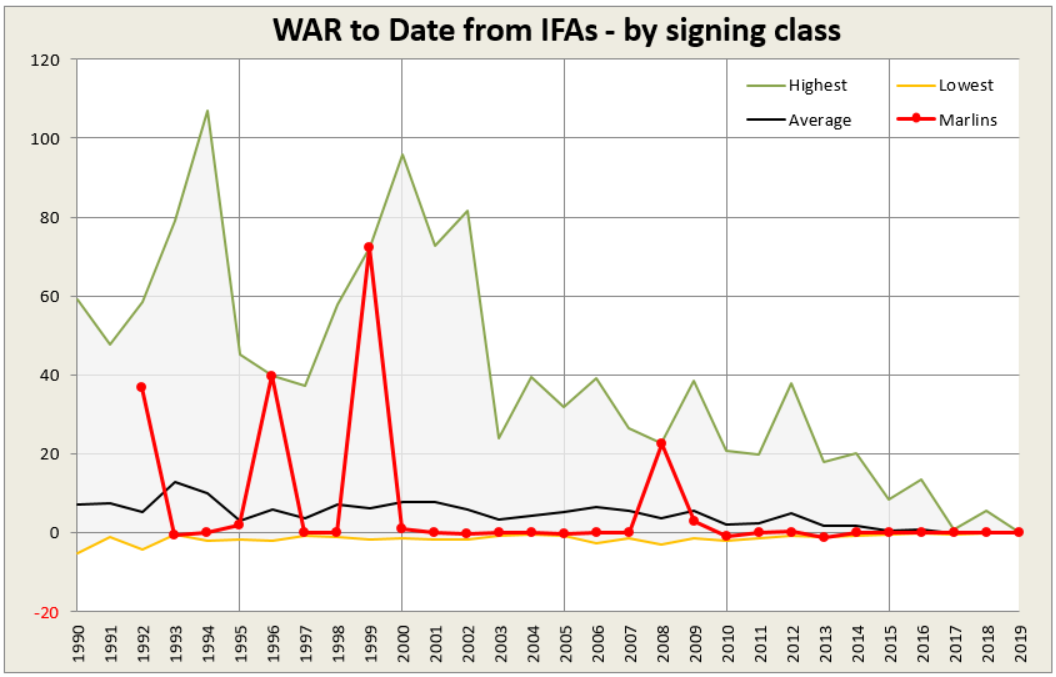 The next graph is similar to the above, except at each point we look at all the signing classes combined, from that year through today. So for example, for all years since 2000, the team whose signings produced the most WAR over that time is the Mariners, with 237. The average team's signings have produced 70 WAR, and the Marlins' IFAs over that time have produced 24 WAR (which is 25th most over that time). 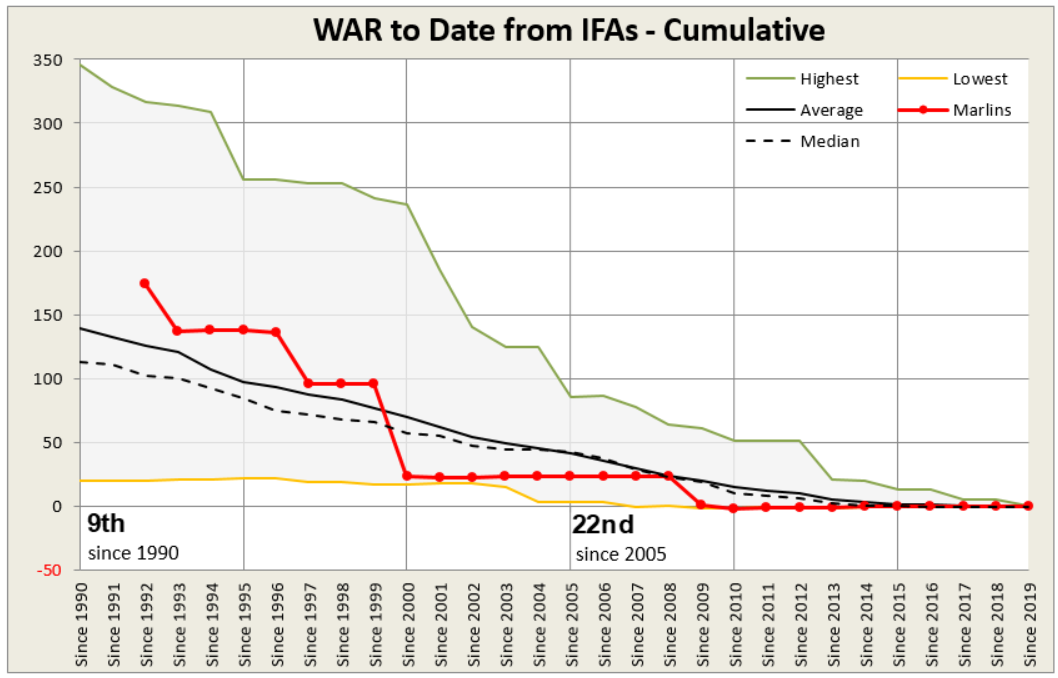 For those who prefer numbers, these are the tables behind the graphs:

Below is a graphical view of their best signings of the last 30 years in terms of WAR produced to date. The heights of the columns correspond with the red line in the first graph, but we zoom in to show the individual players that make that up. The more successful ones are broken out, and any remaining ones are included in the light green boxes: 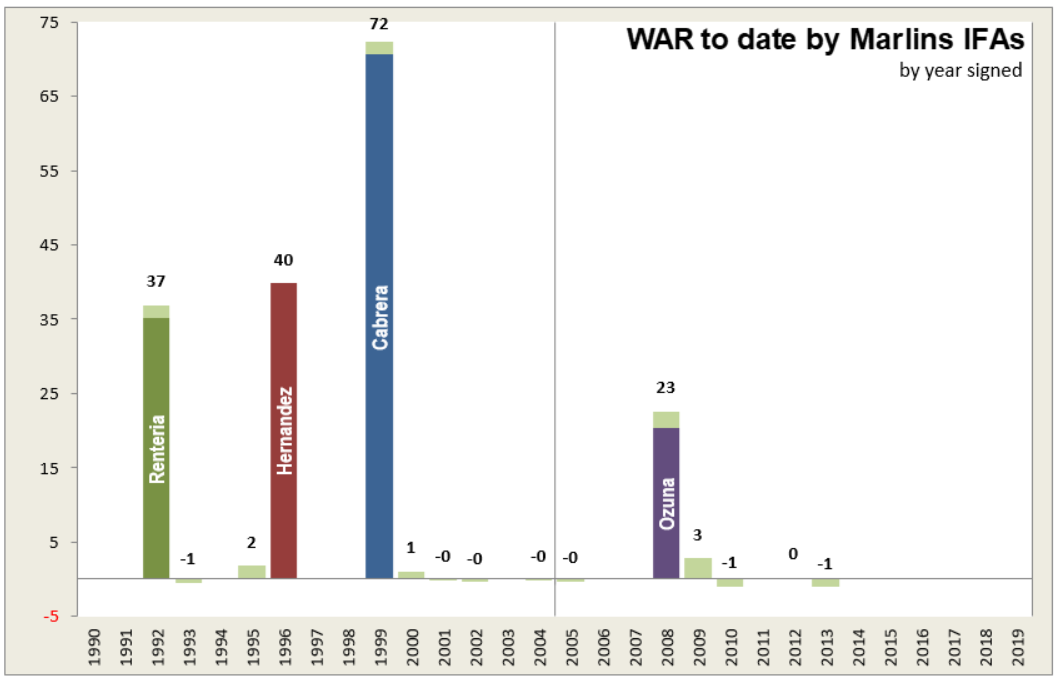 It's been feast or famine for the Marlins, with four players representing 95% of the total WAR produced by all signings: Edgar Renteria, Livan Hernandez, Miguel Cabrera, and Marcel Ozuna.

Ozuna is the only player they've signed in the last 20 years who has produced on the field so far.

This is the complete ranking of the 30 teams (plus the average), and we'll reveal team names as we go up: 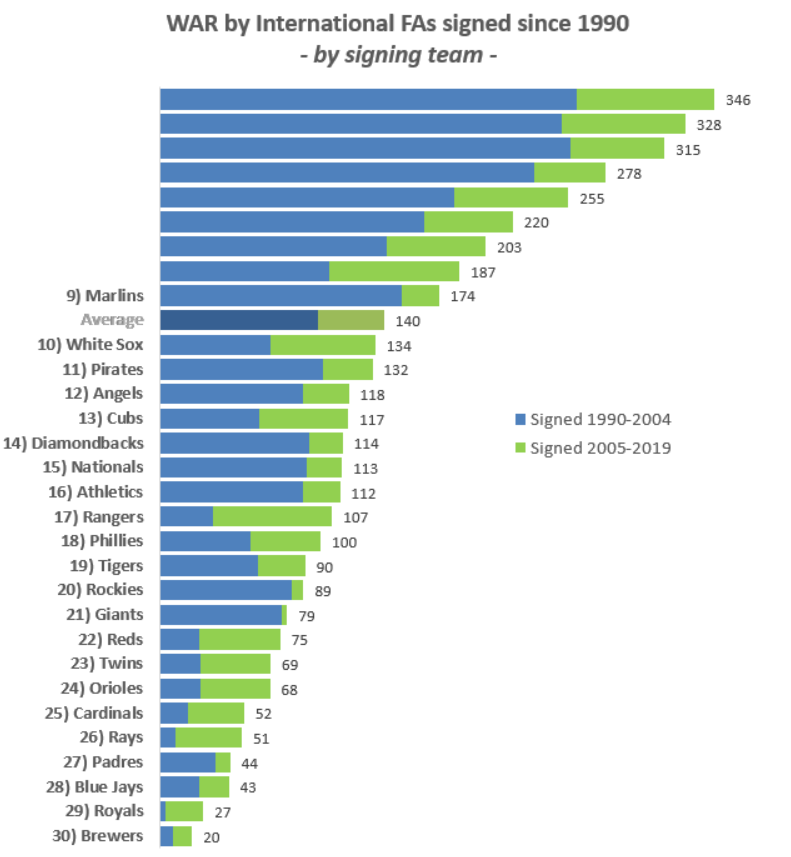