Is it time for the valuable utility player to take ownership of a single position?

Prior to the 2015 campaign, the Miami Marlins and Los Angeles Dodgers executed a trade that was centered around second baseman Dee Gordon coming to Little Havana. Gordon made an immediate impact on Miami; there’s no denying that he was as electrifying as advertised and a fan favorite.

That being said, I have a question for you...Since 2017, Dee Gordon has a higher Wins Above Replacement (WAR) than Miguel Rojas. True or false?

False. The distinction belongs to the current Marlins infielder. Rojas has a collective WAR of 4.5, while Gordon has contributed 3.7 in that span between Miami and Seattle.

Producing value on par with an average everyday player, there is a strong case to be made that Miguel Rojas should serve as the 2019 Marlins starting shortstop.

The 30 year-old Rojas—Happy belated birthday!—matured through the Rays, Reds, and Dodgers farm systems as a glove-first player. He’s been a standout defender in the majors with 35 Defensive Runs Saved (DRS) since debuting in 2014, with his 2018 campaign yielding a +14 DRS across 1B, 2B, 3B, and SS. As a comparison, old friend Adeiny Hechavarria has 23 DRS in the same span of time.

To put it plainly, Rojas is good to great with the glove.

The hope for him in 2019? That he can develop that kind of proficiency at the plate.

We saw Rojas take positive strides last season. His soft contact percentage decreased from almost 28% in 2017 to 20% in 2018. Putting the bat on the ball with authority led to more homers (11 easily set a new career high). He also showed better gap-power production and turned what used to be harmless grounders into solid singles to the outfield.

Rojas began elevating the ball with a noticeably different swing plane. Using Statcast data, we can illustrate how he consistently had a positive launch angle, unlike in 2017. 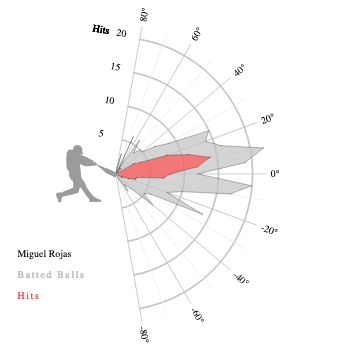 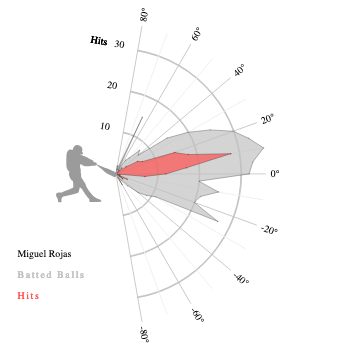 He generally stepped-up with men on base (.733 OPS) and in scoring position (.738 OPS). On the other hand, the Venezuelan veteran would occasionally fall back into bad habits at inopportune times, hammering pitches straight into the dirt and grounding into an NL-leading 23 double plays.

Miggy Ro’s aggression paid off in power production, but his walk rate and on-base percentage dipped from the previous campaign. That negated some of his progress and should make him consider searching for a better balance in 2019.

Spring competition for the Marlins shortstop job is a tight one, as explained in the JT Riddle preview released on Wednesday. But it’s a win-win for Fish fans—they have two solid candidates, leaving the loser of that battle as an over-qualified backup.

Regardless, both Rojas and Riddle figure to get significant reps while the more tantalizing shortstops in the organization continue to refine their skills in the minors.