Many fans seem frustrated by the team’s low-scoring offense. But is bringing the fences in (again) the right solution, or do the Marlins just need better players?

Share All sharing options for: Is Marlins Park unnecessarily big?

August 22nd was a pristine, under-the-dome night for baseball in Miami, as the New York Yankees took on the Marlins. The Park was more crowded than ever, thanks in part to a well-traveling contingency of nationwide Yankees fans.

In the second inning, Gleyber Torres stepped up to the plate and hit a towering fly ball with a launch angle of 36 degrees and an exit velocity of 95.7 miles per hour. The thunderous crack of the bat was met and ooh’s and ah’s from around the stadium, all before the ball nestled softly into the glove of Magneuris Sierra for the out.

A Yankees fan that my dad and I were talking to immediately turned to us. “I can’t believe that didn’t go out!” he exclaimed. “That would have been gone in Yankee Stadium!”

[Freeze, cue Arrested Development voice]: It would not have been gone in Yankee Stadium. Baseball Savant had the distance at 340 feet. 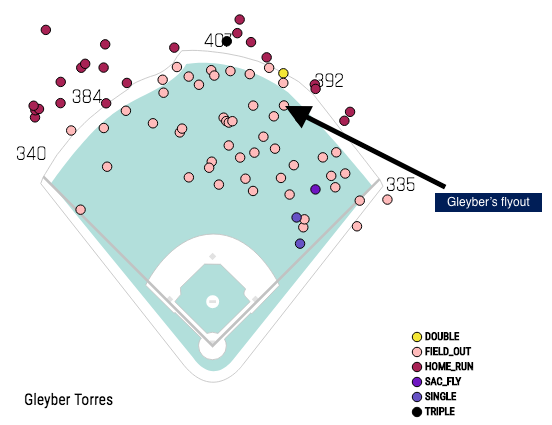 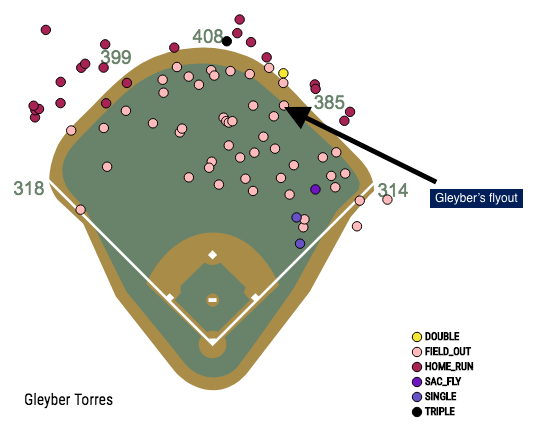 Nevertheless, Marlins Park has earned a reputation for being a oversized, hitter-unfriendly ballpark. Day after day, the Fish Faithful marvel at the amount of hard hit balls that fade harmlessly into the outfield. As teams like the Chicago Cubs hammer balls onto Sheffield Avenue, the hopes and dreams of Marlins’ batters, along with those of their opponents, die on the dirt of the warning track. Despite moving in and lowering their fences in 2016, the Marlins still can’t shake the “unnecessarily big” reputation.

If the example above is any illustration, however, it appears that the eye test fails us. Let’s see what the numbers have to say about Marlins Park.

How big is Marlins Park, generally?

A good starting point for this inquiry is to check the dimensions on Marlins Park. There are many different kinds of ballparks in the MLB. From the roundest and most symmetrical grounds like Globe Life Park or Kauffman Stadium, to the geometrical nightmares of Fenway Park or AT&T Park, dimensions give us the first bite at the apple when it comes to evaluating how deep fences are.

Here is the amount of square footage per home ballpark, according to Clem’s Baseball:

We’ve always known that Marlins Park is big, and the table data supports this notion. It is tied for having the third-most fair square footage in Major League Baseball.

To continue the inquiry, we need to incorporate another statistic: park factor. I discussed park factor in a previous article:

Park factors in general are calculated by taking a team’s production at home, dividing it by a team’s production on the road, and then multiplying it by 100. The resultant number represents at 162-game total of the percentage of production a team earns/loses by playing in its home park. Because teams only play 81 games in their home ballpark, the amount above/below 100 is thus divided by two in order to get your final statistic.

Current as of 9/4’s games ESPN.com

This means that hitters generally face a runs scoring deficit of 26% just by stepping to the dish in Marlins Park. Marlins hitters specifically have had their run scoring deflated by 13% just from playing at home. Further, the park factor for home runs in Miami is .653, meaning that all hitters this year are experiencing a 35% deflation in home run percentage at Marlins Park, with Marlins hitters specifically taking a 17.5% hit.

The underlying gripe from fans is that the depth of the outfield stifles the Marlins’ offense. The logical and obvious assumption is the more square footage there is, the more room there is for fly balls to die and get caught, rather than fall into the stands.

On a graph, this would be evidenced by a negative correlation between square footage and park factor. This isn’t necessarily the case:

The trend is extremely subtle, but the line of best fit actually trends upwards. If there’s anything correlation at all, it’s that bigger outfields create better opportunities for hitting.

You can thank the architects of Coors Field for this (far right point on the plot). Coors Field is notorious for being one of the best hitter’s ballparks in the game. The culprit is the the mile-high thin air—balls tend to fly better through thin air than thicker air. To counteract the effects of the thin air, the Coors outfield was made very big. We saw earlier that Coors reigns supreme in yardage with 119,200 square feet.

To a certain degree, Coors is still a haven for homers, with a home run park factor 115.9. More importantly, however, the doubles park factor is a league leading 140, meaning that the Rockies hit and allow more doubles at Coors Field than any other team around the country does at home.

And yet the Marlins trail the Rockies in amount of fair territory by less than five square feet. If Coors’ outfield wasn’t so big, it might be more of a laughing stock than it currently is. The Rockies and the Marlins have very similar batted ball percentages on line drives and fly balls, so it makes you wonder why the Marlins haven’t taken advantage of their similarly expansive ballpark as the Rockies have.

On the other hand, the Rockies’ home BABIP is more than 40 points higher than the Marlins’, which shows that the rub may be in the extra five-square feet. To pitchers, Coors may be unnecessarily big; the outfield depth barely offsets home run power, and instead costs their staff more via the double.

The other huge outlier pulling the line just above 90 degrees belongs to the Texas Rangers. They only have the 6th-most fair territory, but their park factor is a league high 135.6, thanks to a home run park factor of 131.2. After that, the results are pretty random. The focus should be on the horizontal line at y=1; a dot above that is a hitters park, and a dot below is a pitcher park. You can see that at almost any other square footage, there are both hitters and pitchers parks.

What comes first, the chicken, or the egg? The park factor, or the caliber of the home team? Since park factor is essentially determined by production and run prevention of only the home team, the park’s factor is almost inextricably tied to how good a team’s batters or pitchers are.

For example, here’s what we get when we measure a team’s home wOBA against their park’s factor:

Will Marlins Park always suppress the Marlins’ run production? Or can the Marlins change the narrative on their field just by hitting better?

What would happen if the Red Sox played their home games in Miami, and the Marlins played in Fenway Park? The Marlins wOBA from both home and road games this year only averages out to .293, while the Red Sox comes out to .339. Clearly, just moving the Red Sox to Miami wouldn’t completely stifle their offense. The Marlins must accept some of the blame in this narrative.

Let’s go to one more resource.

Park overlays and hit charts can be found at Baseball Savant. For any player in any season, you can find out where a player’s batted balls ended up, and—of interest to us—what balls in play in Miami would go for home runs in other parks. Two exemplary players come to mind in this instance

Who won the trade? After the Marlins executed their salary dump of Giancarlo Stanton, Marlins fans were chomping at the bit to get an actual prospect haul on their next trades. Christian Yelich, who came up with the Marlins, was consistently touted as one of the brightest young stars, and one of the best eyes in the game.

Although he played well with the Marlins, Yelich has really come into his own with the Brewers this year. He has powered their playoff run, and has even snuck into the NL MVP race after recently hitting a grand slam and for the cycle. Why the sudden outburst? Many believe that the change in scenery is to blame. This year at home in Miller Park, Christian Yelich is hitting to the tune of a sky-high .413 wOBA with 15 home runs. Compare that to last year in Marlins Park, when he had just a .324 wOBA with 7 bombs, and you can believe that the move made the difference. 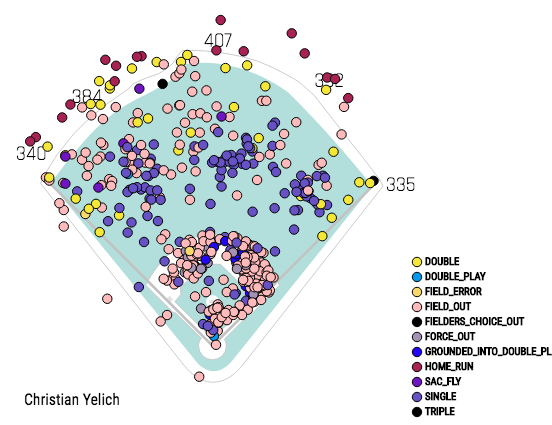 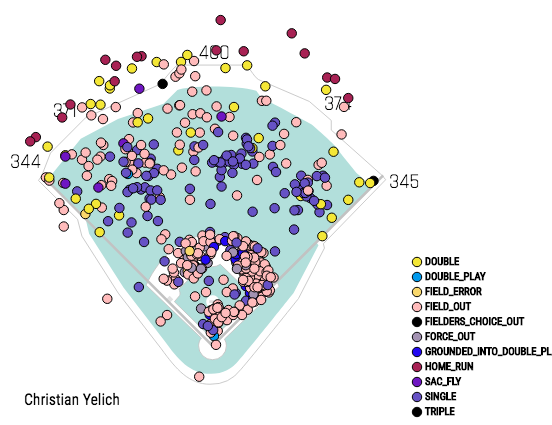 Now what you want to do is slide that bar back and forth, and take your finger and count all of the balls in play in Marlins Park, that would have gone out in Milwaukee. The information is precisely tracked with in-stadium cameras, but you can still see it’s not an exact science; even on the Marlins graph, some balls that appear to land behind the wall are shaded in yellow, signifying a double. Still, it’s worth noticing that some balls that got caught in the weird, dead-center sculpture indent or deep in the right-center pocket in Marlins Park might have ended up making it out in Miller Park.

Other than that, however, there aren’t any balls unreasonably dying on the track in Marlins Park that would normally go out in Miller. Just a couple fringe cases. Christian Yelich isn’t a total product of his environment; although he may be getting some help from the shorter porch, any real advantage he’s getting is likely marginal at best.

And what about Giancarlo? When the trade to the Yankees was announced, the Bronx salivated over what Stanton could accomplish in New York. Fifty-nine bombs in the travesty of Marlins Park might has well have been 100 in both, the confines of Yankee Stadium, and the minds of Yankees fans everywhere.

Yet here we are: at home this year, Stanton has a modest wOBA of .334 and has hit just 18 home runs. Compare that with last year, when Stanton sported a wOBA of .440, and hit 31 out of Marlins Park. 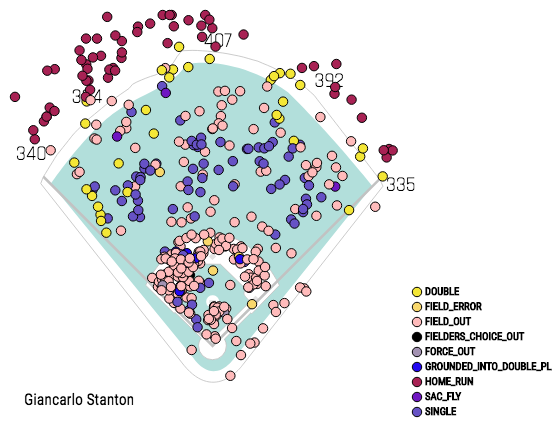 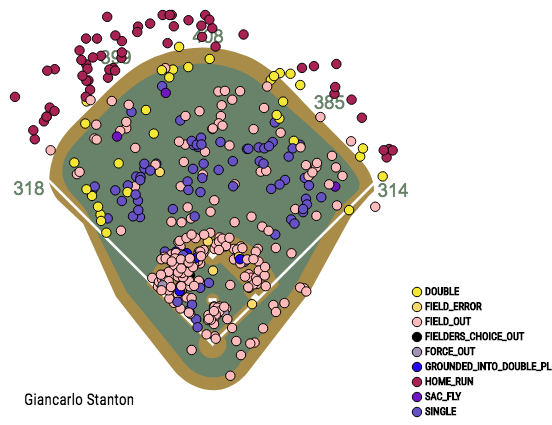 As it appears that left field in Yankee Stadium is actually deeper than that of Marlins Park, there are few—if any—balls pulled that Marlins Park has unrighteously held. He does add about 3-5 home runs to his tally in right field by playing in New York. But with power like his, Giancarlo is in control of his own fate; wherever the wall is, he’ll decide if he wants to hit it over or not.

So what’s the answer?

I’ll give you the law school answer here: it can go both ways.

When I compare Marlins Park with its brethren in square footage, I fail to see a justification for making the outfield so big. For the Rockies and the Diamondbacks, where the air is so thin, I understand having to offset the climate with distance. The Mets’ Citi Field, which was maligned for its depth in its first years of operation. They eventually moved the walls in, and so have the Marlins. Has it helped? Citi Field this year holds the only park factor worse than the Marlins, so apparently not.

There are a lot of other factors at play beyond the size of the yard. We’ve seen that there are teams that hit well at large fields, and teams that hit well at small fields. We’ve seen that there are some hitters that perform better when they leave Marlins Park, and others that feel right at home in Little Havana. As shown by the Marlins’ park factor, they do deal with some semblance of a disadvantage when it comes to home run hitting. It doesn’t have to be all bad, though. Like the Rockies, the Marlins can be a doubles team and reap the benefits of their home.

Rest assured, Marlins Park is big. With the 12th-best home ERA and 11th-best opposing wOBA, the Fish pitching staff does enjoy a bump from pitching at home. The hitters do fight an uphill batter.

But unnecessarily big? I personally don’t think so. Agree to disagree, Luis.