Checking in on José Ureña and his slider

Early in the season, I hypothesized that one key adjustment from the 27 year-old righty could be the difference between “good” and “great.”

Share All sharing options for: Checking in on José Ureña and his slider

At the beginning of the season, after one good and one not-so-good start from Jose Ureña, I suggested—and perhaps hastily so—that his success this season would be predicated on his slider usage.

José Ureña on the edge of glory

From 2015-2017, José Ureña’s best pitch was his slider. According to Fangraphs’ weighted runs from 2015-2016, while Ureña’s fastball checked in well in the red, his slider was worth 2.0 runs and .8 runs, respectively. Ureña’s fastball improved to a modest three runs above average in 2017, but his slider more than doubled that at 7.4.

On Opening Day this year, Ureña came out and got shellacked by the Chicago Cubs, quite literally from the first pitch. Allowing five earned runs over just four innings, Ureña threw a fastball on more than half of his pitches, while throwing his slider and changeup both at around 20%.

A much different José Ureña pitched against the Boston Red Sox four days later. Ureña pumped his slider percentage up to 37% and opted for the fastball just 49.5% of the time. The result: seven innings of one-run baseball.

And so I wrote the article, explaining how Ureña’s success may be tied to his success with the slider. While Ureña works a changeup into a three-pitch mix, I proffered that Ureña could really come into his own by efficiently mixing and tunneling his wicked two-seamer with his effective slider.

A lot has happened for José Ureña this year. Win-loss record for individual pitchers is no longer significant, but on a team level, the Marlins lost the first twelve games that Ureña started in. He incited The Brawl of the Season after plunking some guy named Ronald Acuña with the first pitch of a game. In his last three starts, Ureña has been sharp, letting up just three earned runs over 18.1 IP, while striking out 16.

While Ureña’s year hasn’t been great, he has been a serviceable starter in the Marlins rotation. To this point, Ureña has recorded career bests in a number of categories. With the most starts on the team, his relatively modest ERA and FIP are good enough for 3rd-lowest and 2nd-lowest, and his fWAR leads all Marlins pitchers.

So what’s the culprit for Jose Ureña’s improvement this season? I was dying to know if it was his slider usage. I could just imagine Juan Nieves printing my article directly off Fish Stripes and showing it to José. After pulling up the numbers, I was met with slight disappointment.

Ureña hasn’t made any significant adjustments to his repertoire from 2017-2018; his pitch percentages have each varied by just one or two percent. His fastball value, however, has somehow made a significant jump; at 8.5 weighted runs, this is the first year that his fastball has been more valuable than his slider. Despite throwing it just 1.8% more than last year, it has been worth 5.5 more weighted runs than last year’s version.

One difference from last year to this year is an increase in velocity on Ureña’s off-speed pitches. Average velocities on both his slider and changeup have increased by a little more than 1 MPH each. His fastball is also up from last year at an average of 96.2 MPH. Otherwise, he isn’t getting significantly more horizontal break on his pitches. 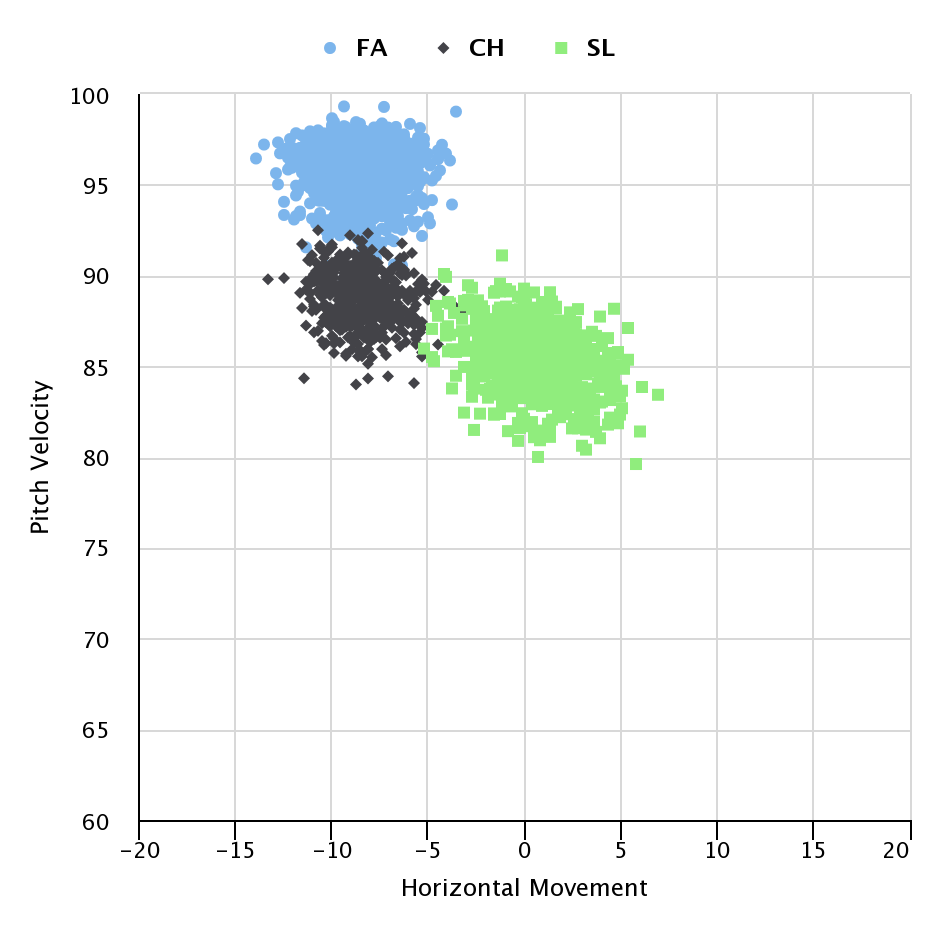 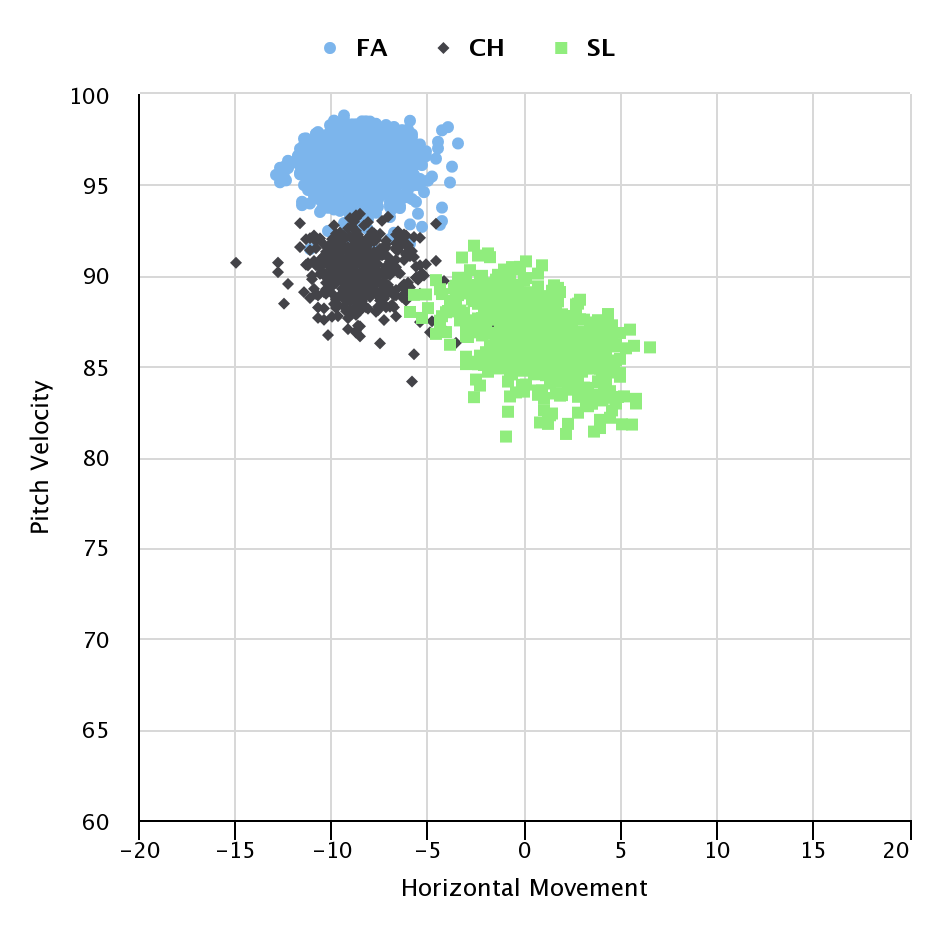 Jose Ureña Velocity and Horizontal Movement of pitches from 2017 to 2018
Fangraphs.com

The same can’t be said for vertical break, and this may be a factor as to why his fastball has been so much more effective. Compared to last year, there is a discernible departure in vertical movement. Whereas his slider may have better resembled a curveball in 2017, it has significantly flattened out this year. The same goes for his changeup, and even his fastball. 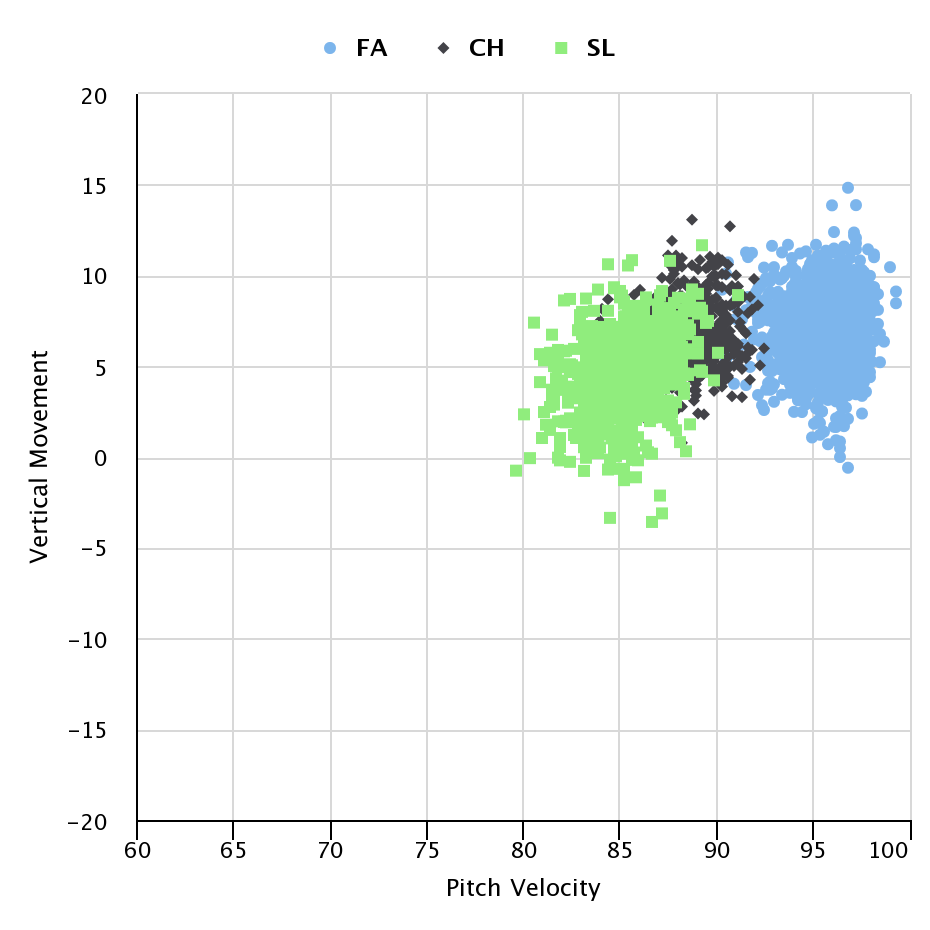 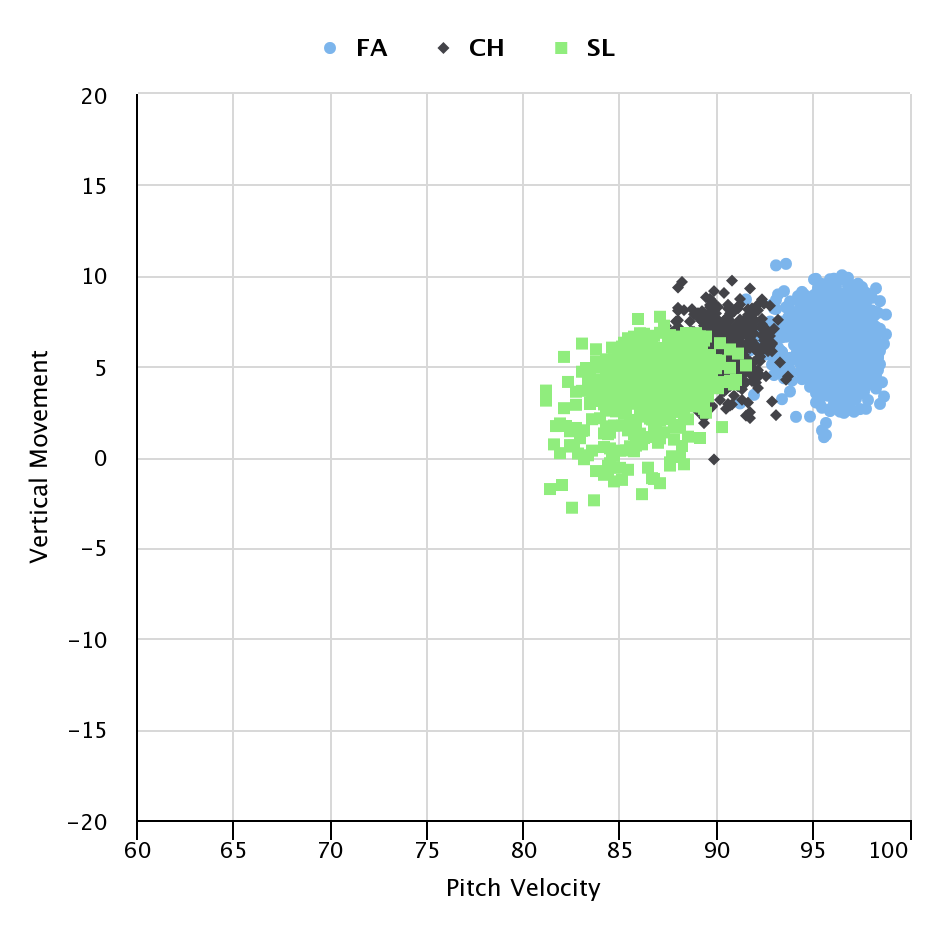 His release point data this year explains the disappearance in vertical movement. Ureña—whether consciously or not—has subtly and constantly varied his release on a horizontal plane all year. Meanwhile, on the vertical axis, Ureña has made his release point more consistent. This probably explains why his pitches have flattened out. At an average of 86.6 MPH, Ureña has complimented his fastball with more of a cutter than his traditional slider. 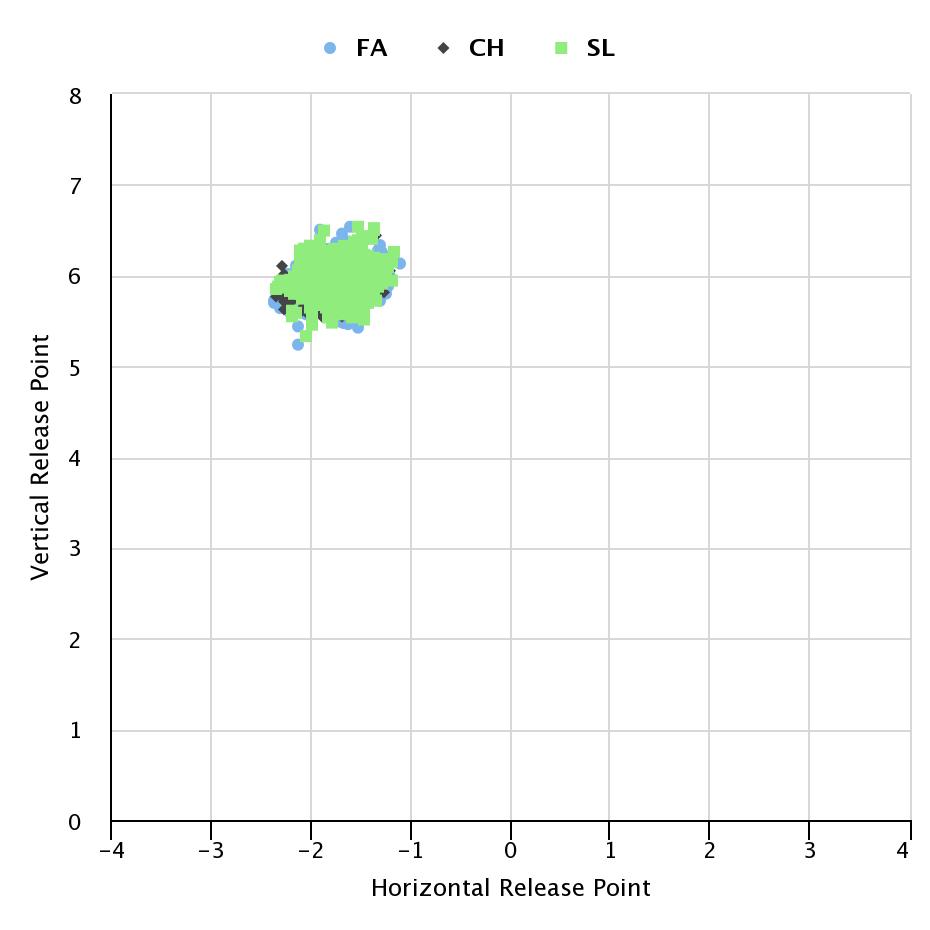 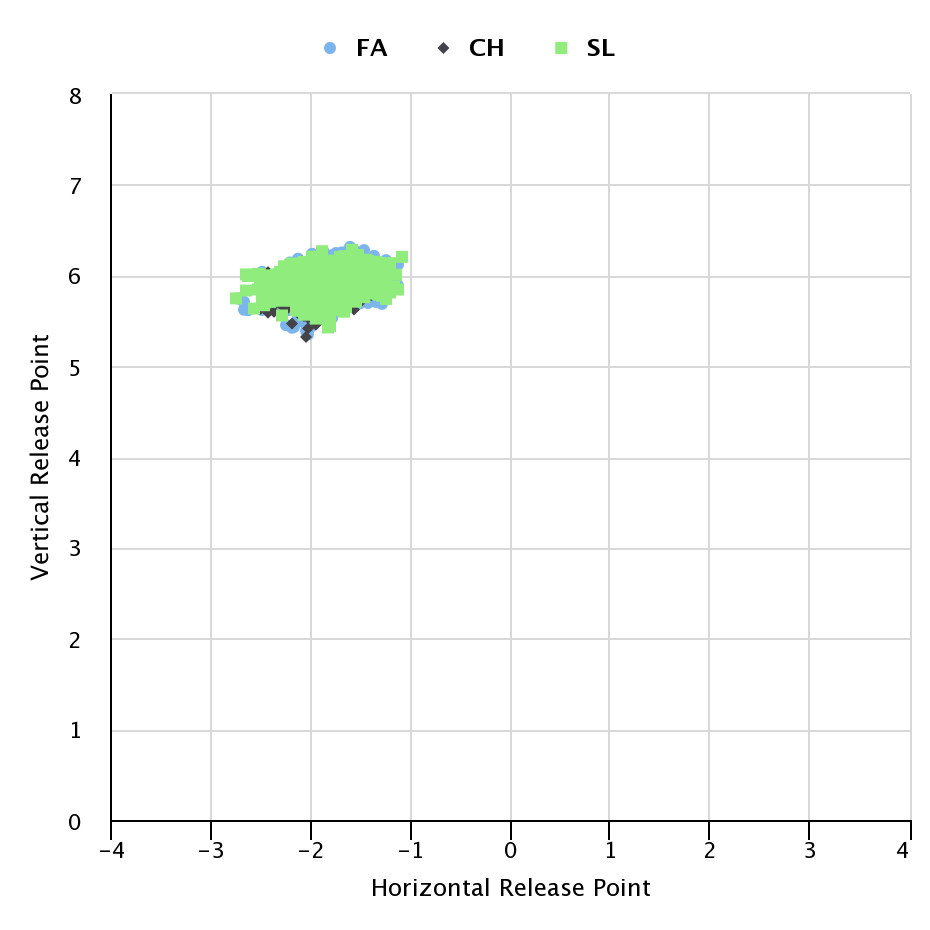 I clarified in the previous Ureña article that merely increasing the bulk of sliders thrown wouldn’t create a positive change on its own.

With that said, the moral of the story isn’t just for Ureña to throw the slider more.

That was partly correct: 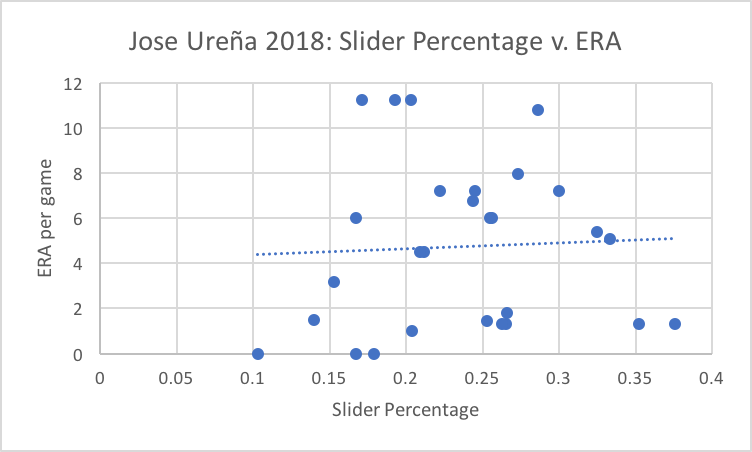 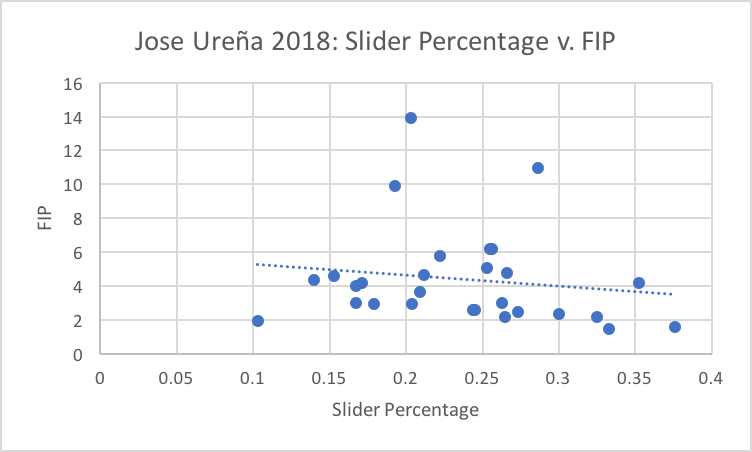 FIP and ERA tell different stories. More sliders did Ureña right as far as his ability to control the three true outcomes: walks, homers, and strikeouts. However, on balls put in play, games with higher percentages of sliders thrown turned into more earned runs allowed.

But the main assertion of my previous article was that Ureña’s success would be dependent on how well he could tunnel his fastball with his slider. The underlying assumption from the new data is that with a harder and flatter slider, tunneling the two should be easier to do, as opposed to if he had a loopier, slower breaking ball. With two pitches that come out of the hand the same but break in completely opposite fashions, I asserted that his ability to play the two off of each other would make them harder to hit.

When Ureña gets ahead, the guessing game begins. Sure, it all comes out of the hand the same, but what’s it going to do? Is it going to ride in and break a bat in half at 97 miles-per-hour? Or is it going to back up and dive out of the zone at 85? The more evenhanded Ureña is with his pitch selection, the harder the game becomes.

It turns out the two haven’t exactly played off of each other as well as I anticipated:

It’s not the strongest correlation, and I think the line of best fit is skewed here by some strong outliers in the second and fourth quadrant, but the bottom line is still that the slider “being on” hasn’t had a positive effect on his fastball this season. The cluster of seven-or-so points in the first quadrant gives me hope that my theory holds some kind of water, but ultimately, the two pitches haven’t been tied together as tightly as I thought.

Still, there’s support for the notion that Ureña should keep the slider as his go-to off-speed pitch.

This year, the slider has been the hardest to hit based on batting average and slugging percentage, but the second-easiest to hit for power based on isolated power.

What happens when Ureña gives up on the slider in favor of the changeup? Let’s take a look at July, when for the only time this season, Ureña threw more changeups than sliders. 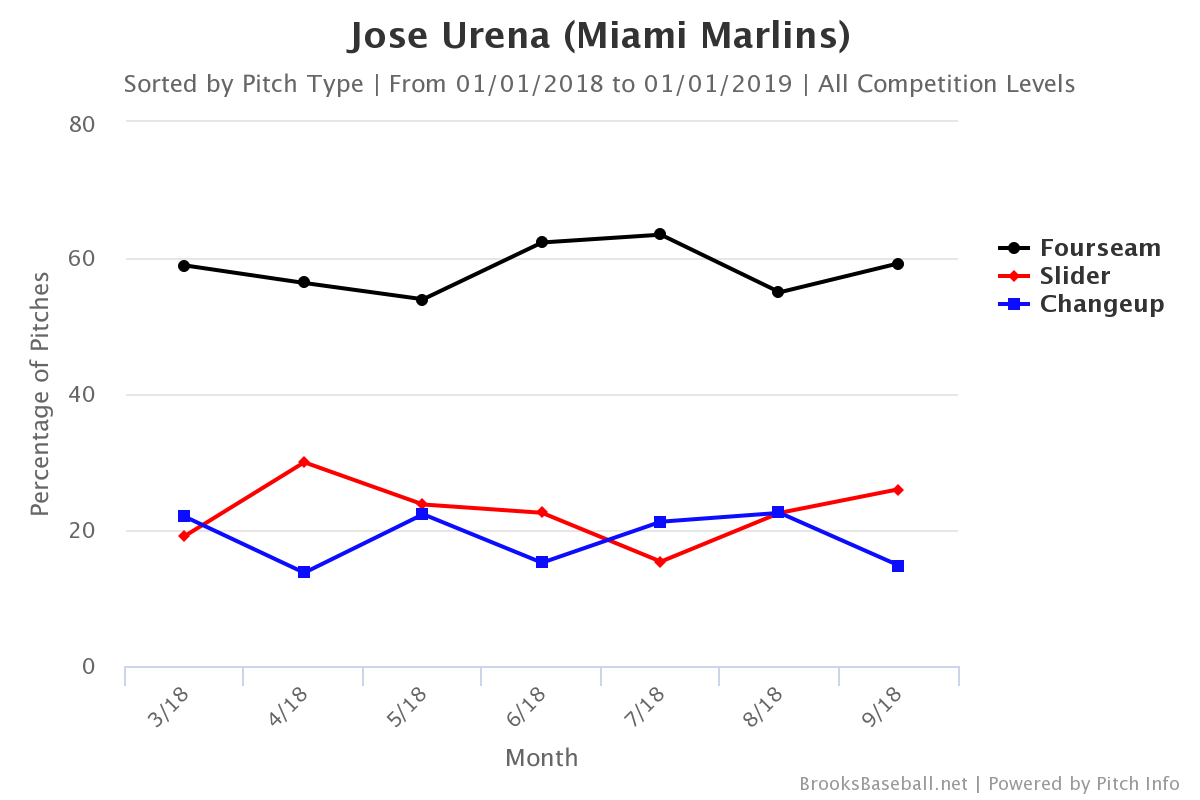 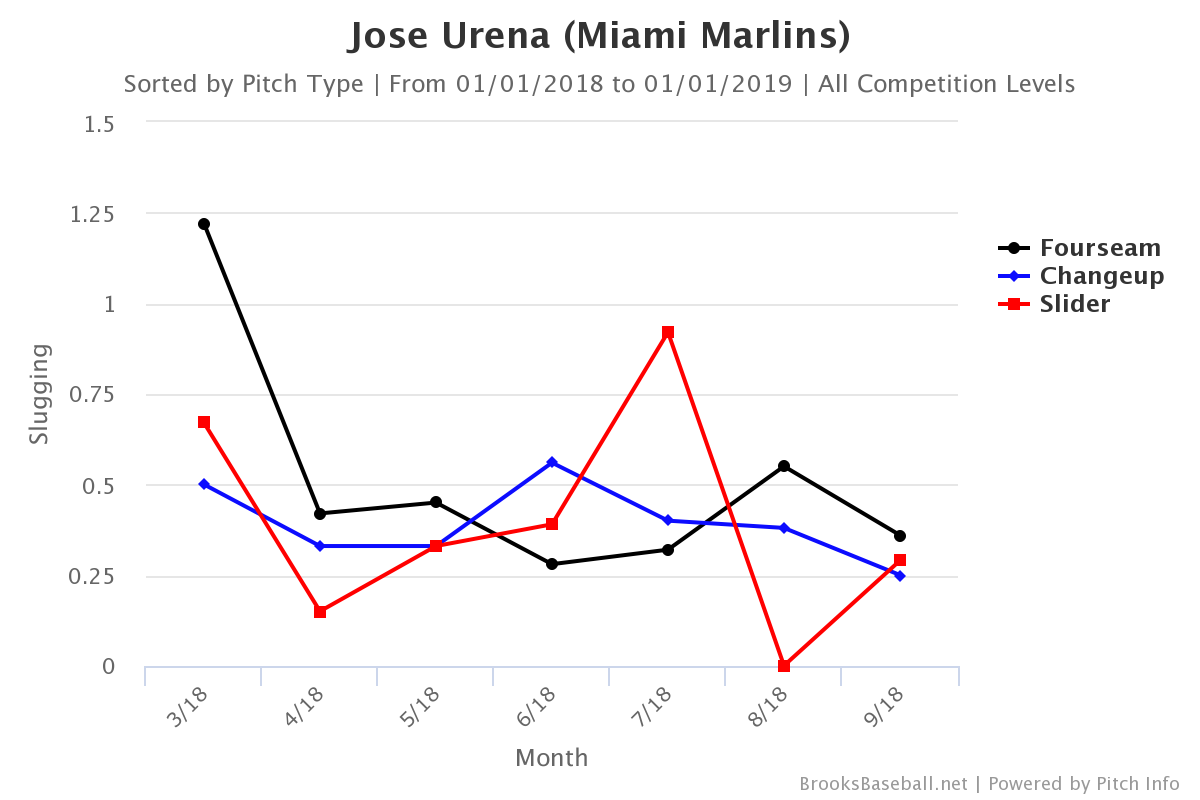 Batters locked in on the slider. On 68 thrown, batters slugged .923. For the month, hitters recorded a season-high .331 wOBA against Ureña. He didn’t return to his slider until the last game of the month against Washington, so it’s clear he had some plan of attack in place to rely on the changeup. It didn’t go well for him.

But does this mean that Ureña should give up on his changeup? Absolutely not. Don’t let the -4.8 pitch value fool you. As far as individual starts go, Ureña is his sharpest when the changeup is on.

It’s common sense that when a pitcher is throwing his pitches the best, they’re going to prevent runs better. That can be seen when we plot pitch quality against run prevention for Ureña’s fastball and slider. 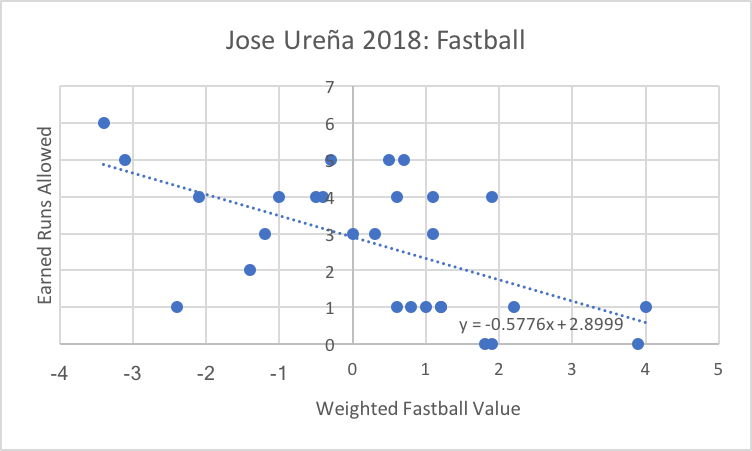 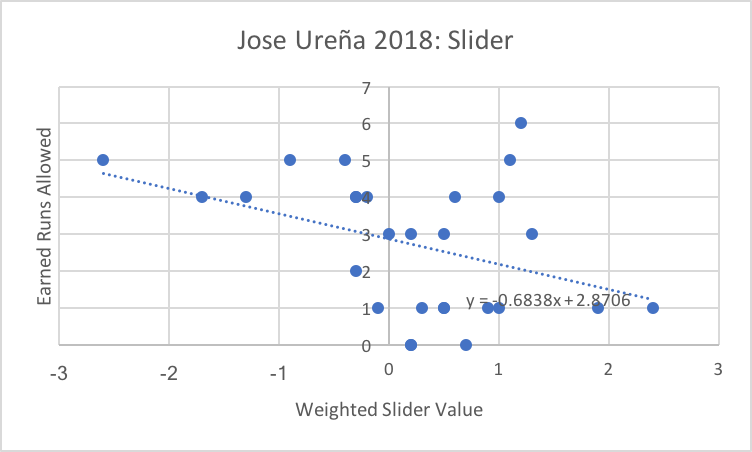 The changeup, however, has been the pitch most strongly correlated to run prevention for José Ureña in 2018.

Taking a step back from the numbers and dots, it makes an abundance of sense. We’ve been able to count on the fastball and the slider from Ureña all year; the changeup is the one we worry about. When Ureña can make the changeup show up and he can use a true three pitch mix, he becomes untouchable. However, when the changeup isn’t working—which is most often the case, as shown by all of the dots left of the y-axis—batters keyhole the fastball and the hard slider, and the runs pour in.

Going into his first arbitration year, the Marlins and Ureña’s agents are going to have their work cut out for them. Although he doesn’t fit the common definition of the word, he has been the Marlins’ “ace” this year. Ureña has so much potential, but there’s no market value on potential—only bottom lines.

Marlins fans had really high expectations for Ureña at the beginning of this year, hoping that if he could reign in his stuff, he could come into his own as a true one. I think if Ureña pitched on a staff where he could blend in as a four or five, or if he took a role in the bullpen, he would thrive. With just three years in the league under the belt, José is still on the steep side of the learning curve. As shown by the data, Ureña often brings two pitches to work, and leaves one on the nightstand at home.

But when he brings all three to Marlins Park, he can shove with the best of them. We know that he has the raw stuff to make it in this league; the key to survival will depend on adjustment and maturity. He needs to make that adjustment soon.

Statistics courtesy of Fangraphs.com and BrooksBaseball.net