When one beefy boy goes, another takes its place

I remember exactly where I was—when Justin Bour got traded. I was standing in my boss’ office reviewing a marketing project during my summer job in California. I thought that he was safe because the Marlins had reached the July 31 deadline with minimal casualties. But I forgot about one other crucial deadline: the waiver deadline.

The news rumbling started from the back of the office, almost like a tidal wave. I could hear the whispers: “Traded...who got traded?? Who got traded? To where???” Before it finally crashed over me: “Justin Bour traded to the Phillies!”

The news rocked me. The Marlins’ own large, jolly lad was trading in his Fish Stripes for red pinstripes. 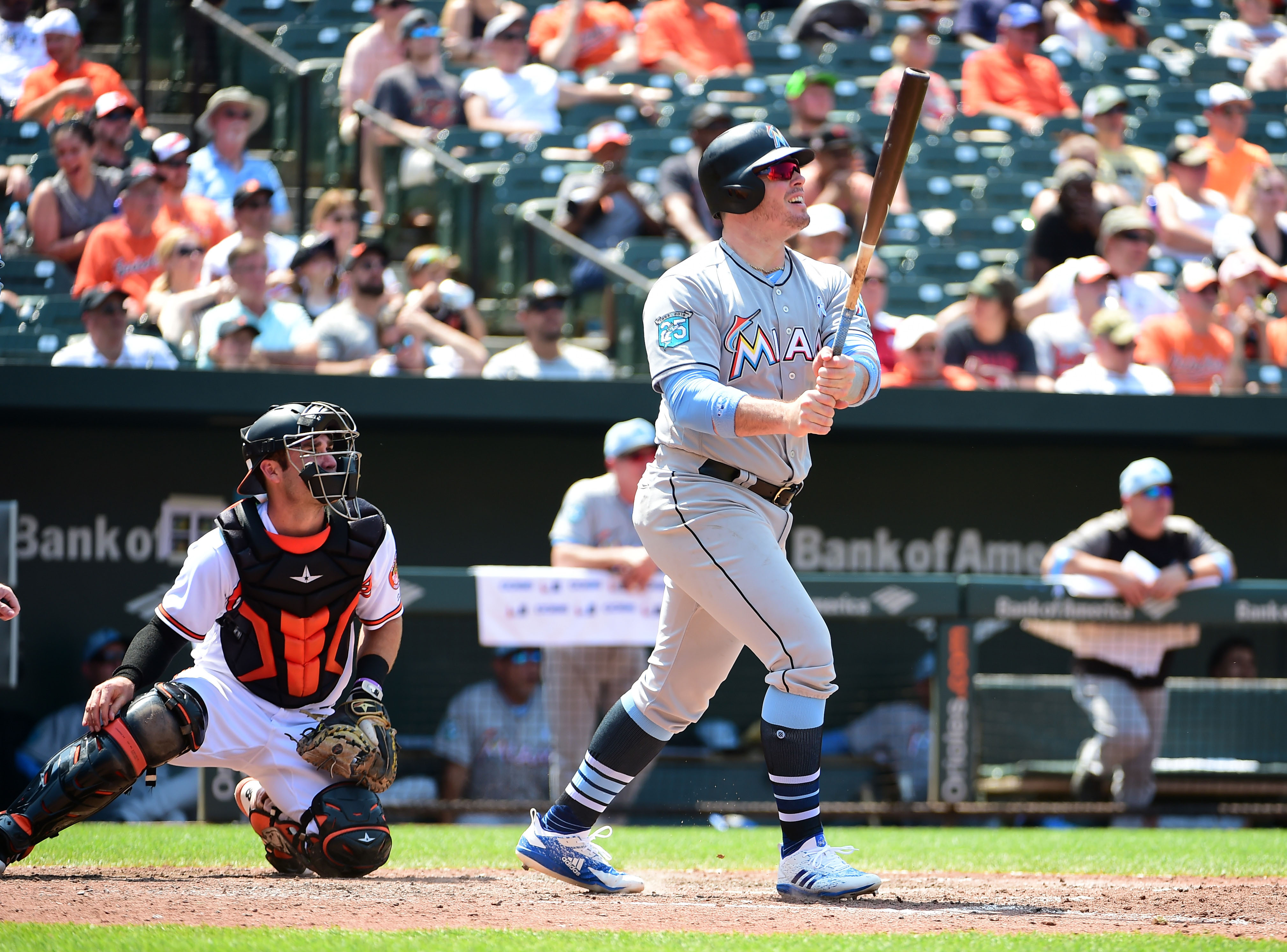 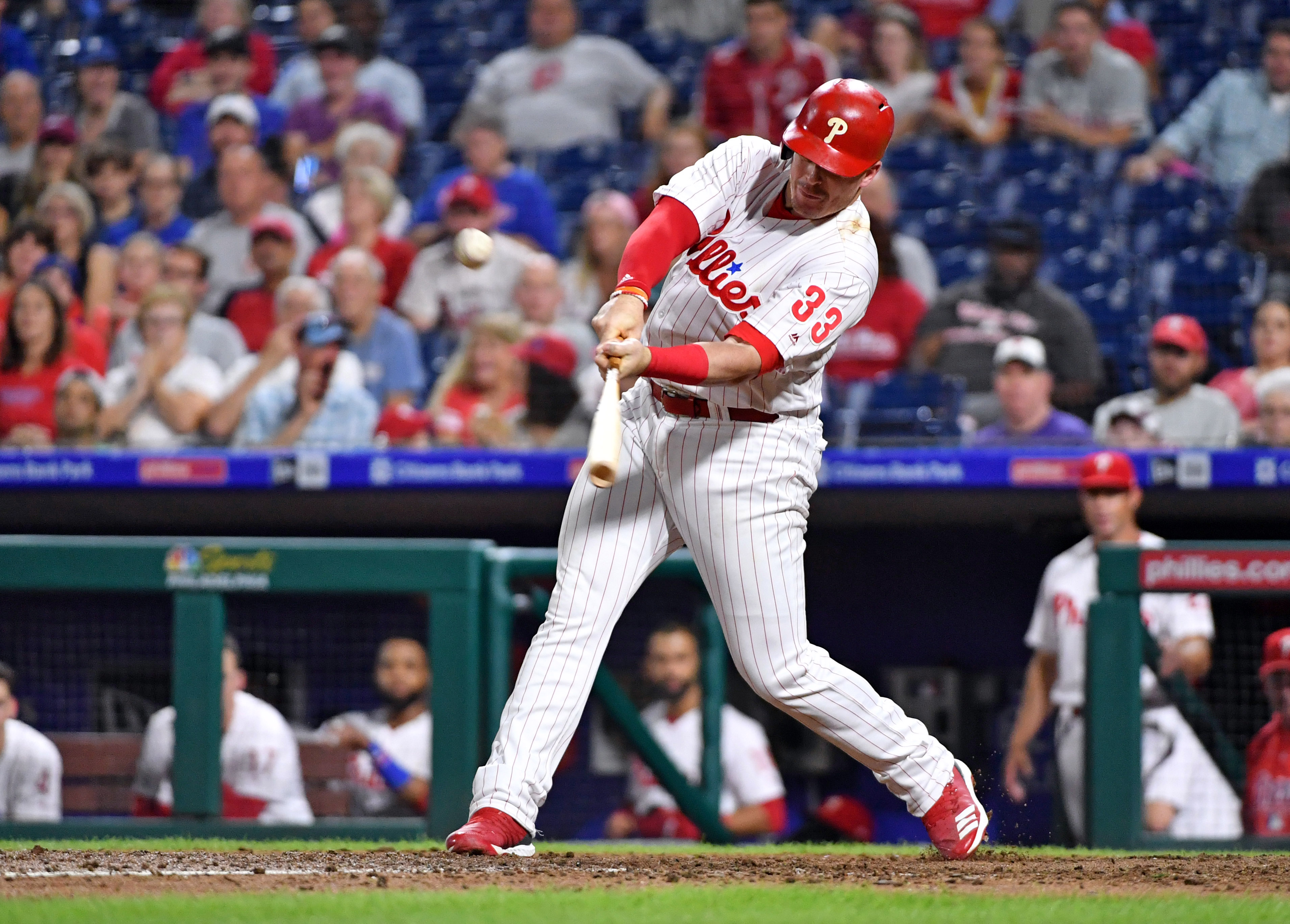 A 25th-round draft pick by the Cubs after trudging through the minor leagues for four years, the Marlins claimed Bour off waivers. He received his first call-up in June 2014, and hasn’t looked back since. One of the Marlins’ most consistent hitters, Bour posted above-100 wRC+’s in all 4.5 years with the Fish. The former clubhouse leader in Fortnite really came into his own in 2017, when his OBP and SLG finally aligned to the tune of a .374 wOBA and a career-high 2.4 fWAR season.

This year again, Bour was one of the best hitters on the Marlins. On a team that hit the fewest home runs in baseball, “The Great Bourbino” was a much-needed source of pop. J.T. Realmuto played out the rest of the season with the Marlins, and still only hit two more home runs than Bour did in a Marlins uniform. Realmuto was the only one to do so.

Overall, I think Justin Bour is a good example of what under-the-radar players can do when given the chance to play. If we’re being completely honest here, Bour is a platoon first baseman; his disparate splits against righties and lefties warrant him only being pencilled in against righties. With that said, no one on the Marlins ever really pushed the envelope to platoon with Bour. The Marlins certainly tried to platoon him; over the years, Bour was paired up with the likes of Mike Morse, Casey McGehee, Chris Johnson, and Tyler Moore. But while all of the righties hung out below the .300 OBP threshold, Bour just kept hitting. He earned the right to play every day.

As an aspiring front office exec, I’m not supposed to have things like “favorite players” anymore. Still, Justin Bour has been one of the bright spots on the Marlins since he came up. From spending a zillion dollars on him and his wife’s Tackle Box to cheering him on in the Home Run Derby, it was always easy to root for Justin Bour.

If the Phillies don’t deal him, the Big Guy is going to have a lot of competition in Philly platooning with Rhys Hoskins and Carlos Santana. But if he’s given a decent shot to compete, he’ll find his way back into the spotlight again.

At the beginning of the year, the Marlins tried to platoon Bour with Garrett Cooper. The 6’6” righty was a top prospect for the Brewers before being traded to the Yankees for a reliever, and then traded again to the Fish for a farmhand and international bonus pool money. Cooper mustered mediocre offensive numbers in just 14 games with the squad after being hampered by injuries.

After Bour got dealt, the Marlins filled in with what they had; Derek Dietrich was given some relief from his time in left field, and after JT Riddle was reunited with the MLB team, Rojas moved over to first as well. When the rosters expanded however, the Marlins availed themselves to yet another large first baseman, Peter O’Brien.

The Hialeah native and former UM star was called back home after a long journey through the minors. Although many had given up on O’Brien since being jettisoned from the Diamondbacks, a Marlins team with shallow first base depth gave him a chance. He didn’t let it pass him by. O’Brien posted a .366 wOBA and a 135 wRC+ in the 22 games he played. He had particularly impressive batted ball statistics, with hard hit percentages and exit velocities that conjured up analogies to the great Giancarlo Stanton.

Shifting across the diamond, we come to the shining star of this article: Brian Anderson. While it’s true that Anderson played more right field than he did third base this year, he played third base the most out of anyone on the Marlins in 2018. After spending September of 2017 in Miami, Anderson broke camp with the club to begin the ‘18 campaign. Anderson took his chance and ran with it.

Rookies in the 1st Half

Notice the disparity in plate appearances on this list. With no regard for any kind of restrictions on service time, Anderson’s feet were held to the flames, and he didn’t disappoint. Anderson was the only rookie on the list taking a whole bite out of the season, and through the first half, he was the leader in the clubhouse for NL rookie of the year.

Anderson’s disproportionately large rookie sample size caught up to him at the end of the year. Don Mattingly rode Brian Anderson to 156 games in his first full season, and the wear and tear showed in the second half. With a wRC+ of 99 in the second half, “The Matrix” was only about an average hitter. Meanwhile, Ronald Acuña Jr. and Juan Soto were happening elsewhere. With that said, a .357 OBP and a 113 wRC+ for the season are nothing to scoff at. Anderson was a crucial element of the Marlins offense in 2018.

Although Brian Anderson came up through the Marlins system as a third baseman, he was thrust into right field to make way for Martín Prado after Garrett Cooper went down. As it would happen, defensively, Anderson was a much better right fielder than he was a third baseman. Out of all right fielders with at least 750 innings played, Anderson was the fourth-best defender according to UZR (8.2 runs saved) and ninth-best according to DRS (4 runs saved).

ROOKIE POWER: Don't test that . Brian Anderson launches a from right field to throw out Travis Jankowski at 2nd.

Other than Anderson, in addition to the usual suspects, Martín Prado was the other predominant third baseman on the team. The Captain of the Marlins played just 37 games in 2017 after pulling up lame trying to beat out a grounder for his native team of Venezuela. This year, he began the season on the 10-day DL with a left hamstring injury. He would hit the DL twice more later in the year with left leg injuries before finally being shelved in September with a right abdominal strain. Prado pieced together 54 games on this season, but faired poorly at the plate; with a .287 OBP and 66 wRC+, Prado cost the team 0.5 wins. In the meantime, Prado factored in for a $13.5 million dent in the payroll, the highest on the team.

Martín Prado has one more year on the books with the Fish before he begins his managerial career. With 2019 being the highest paying year on his contract, the Marlins will have to play Prado at third base, as long as he’s healthy. That likely means more of Brian Anderson in right field, which as we’ve discovered, may be for the better.

The other option is to play BA at third and to slide Prado over to first base to save his legs. Well that’s fine and dandy, but that also gives the Marlins three right-handed first basemen in Prado, Garrett Cooper, and Peter O’Brien. As I prefaced in my article on O’Brien, given his late surge, he has gone from a perpetual Quad-A stowaway to a real contender for the job out of spring training next year. Why can’t Cooper or O’Brien just become a lefty for next year? What, like it’s hard?

Then we have to talk about Derek Dietrich. Dietrich played the majority of his games in the outfield this year, so we’ll talk about him then. But apparently, the Marlins just signed some international prospect named Victor Victor Mesa. And then there’s also some other guy named Monte Harrison who is tearing up the Arizona Fall League. Roster Resource has both of these guys pegged as starting in Double-A; even so, the Marlins still have to find playing time for Austin Dean, Magneuris Sierra, and Braxton Garrett. Dietrich will have to relinquish his spot for a true outfielder sooner or later.

If this is the case, Dietrich will have to move back to first. It shouldn’t be a problem for Dietrich, he’s the lefty the platoon actually needs. But still, we’re looking at three-to-four first basemen for next year, and maybe three for the year after as well.

The conclusion is that everyone isn’t going to make it next year; someone is going to start in New Orleans. Thus, the play-in during Spring Training will be important next year. There’s just not enough room on the roster for two right-handed first basemen.

Who is your ideal first baseman for 2019?