In the past two weeks, the Marlins have gone 7-7 in games against the NL East-leading Washington Nationals, the Atlanta Braves, and the Cincinnati Reds. While the team as a whole has come together to play .500 baseball, one player in particular has risen above the rest and led the offense by a wide margin. If you haven’t been watching the games, or if you read the title of this article...

It’s Giancarlo Stanton. He’s hit seven home runs since July 26 and now has a league-leading 39 for the season. Over the past two weeks, he has a weighted on-base average of .479 and he’s creating runs at a rate that is 99 percent better than the league-average hitter. He’s on fire, you guys. He’s on a mission to hit 50 dingers, and no one can stand in his way. Who else did you think I was going to say? Derek Dietrich?

Well while we’re here, let’s address that issue too. Discounting G’s onslaught of bambinazos, a case could be made that Dietrich has been the best Marlins hitter over the past two weeks.

For the season, the Marlins’ proverbial backup quarterback has amassed a slash line of .240/.315/.399 with a wOBA of .306 and a wRC+ of 86. With a Fangraphs WAR of just 0.4, Dietrich has appeared to have fulfilled his role as just a replacement player.

However, since July 26, Dietrich has made a statement for himself in the batter’s box and has cemented his spot in what can be an extremely fluid infield. With Dee Gordon normally holding down second base, the last two spots on the infield are open to any combination of Dietrich, Miguel Rojas and Mike Aviles, with the hottest bat getting the start.

As it stands now, barring a rest day, it doesn’t appear that Dietrich will be moving off of the hot corner any time soon. Since July 26, Dietrich is slashing .294/.362/.608 with a wOBA of .392. With a wRC+ of 143 over the past two weeks, Dietrich has created runs 68 percent better than he had been before the 26th. He has increased his hard hit percentage by 4.8 percent and is hitting the ball up the middle 43.9 percent of the time.

Like Stanton, Dietrich’s late success is not a fluke, but rather a product of a careful adjustment to his stance. However, instead of subtracting from his swing — as Giancarlo did — Dietrich has added a small leg kick.

The adjustment has tremendously improved his timing. Below are side-by-sides of Dietrich’s swings. The pictures on the left are from June 13; although the Marlins beat the Athletics 8-1, Dietrich grounded out to first base three times, and popped out to second base once in an 0-for-4 day. The pictures on the right are from July 27, when Dietrich led the Marlins to victory over the Reds with a 2-for-3, three RBI game. The left picture resulted in a ground ball to first base, while the right picture resulted in a home run. 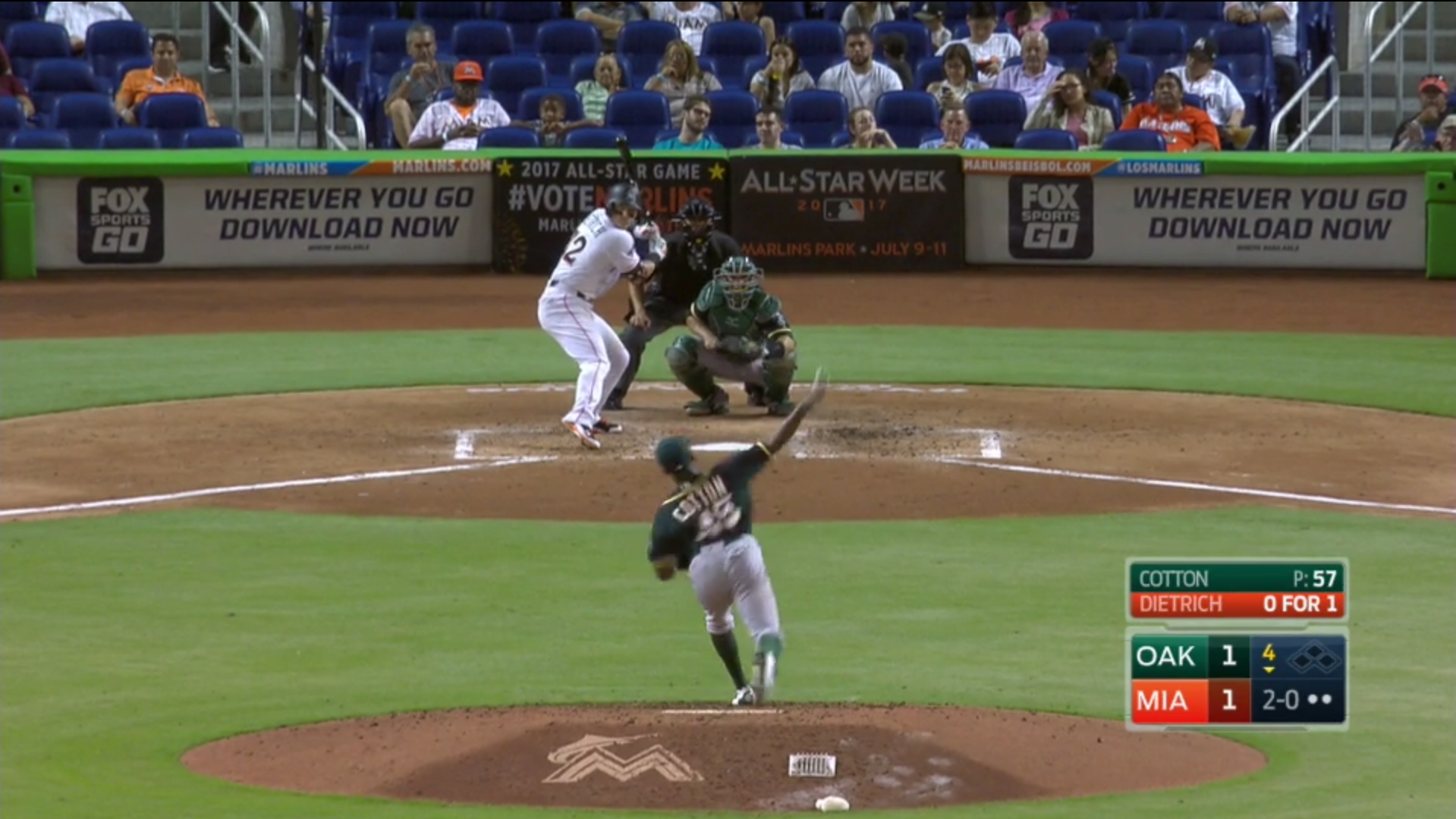 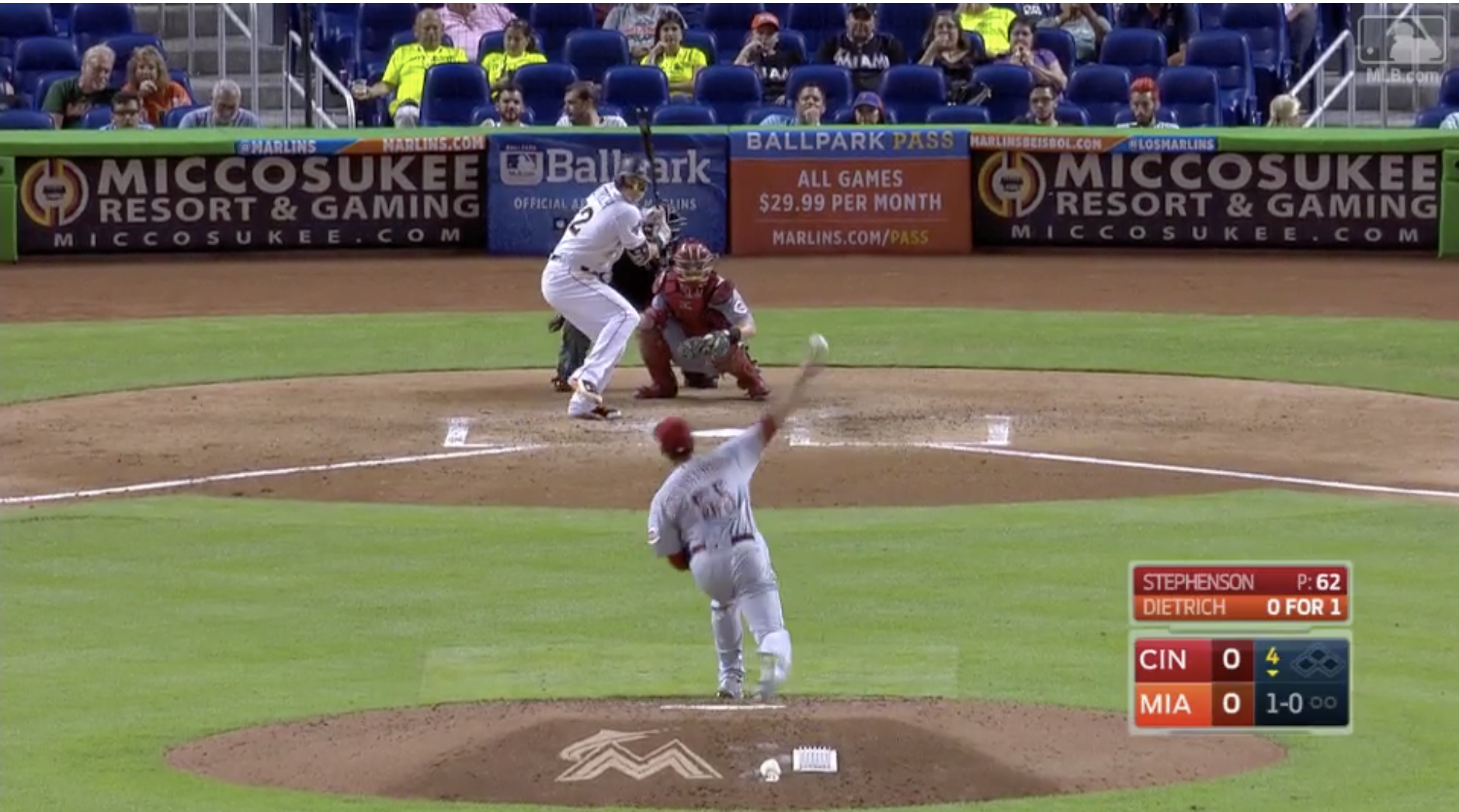 The adjustment is easily perceptible. Not included as a side-by-side is Dietrich’s stance, because his stance doesn’t appear to have changed over the course of the season. However, on the right-side picture, Dietrich has increased his move to the pitcher from just a closure of the stance to a full-blown leg kick. While the leg kick is a maneuver that can sometimes impede a batter’s timing, it is evident that the adjustment has aligned Dietrich’s mechanics, so as to allow him better contact with the ball. Compare the two pictures below. 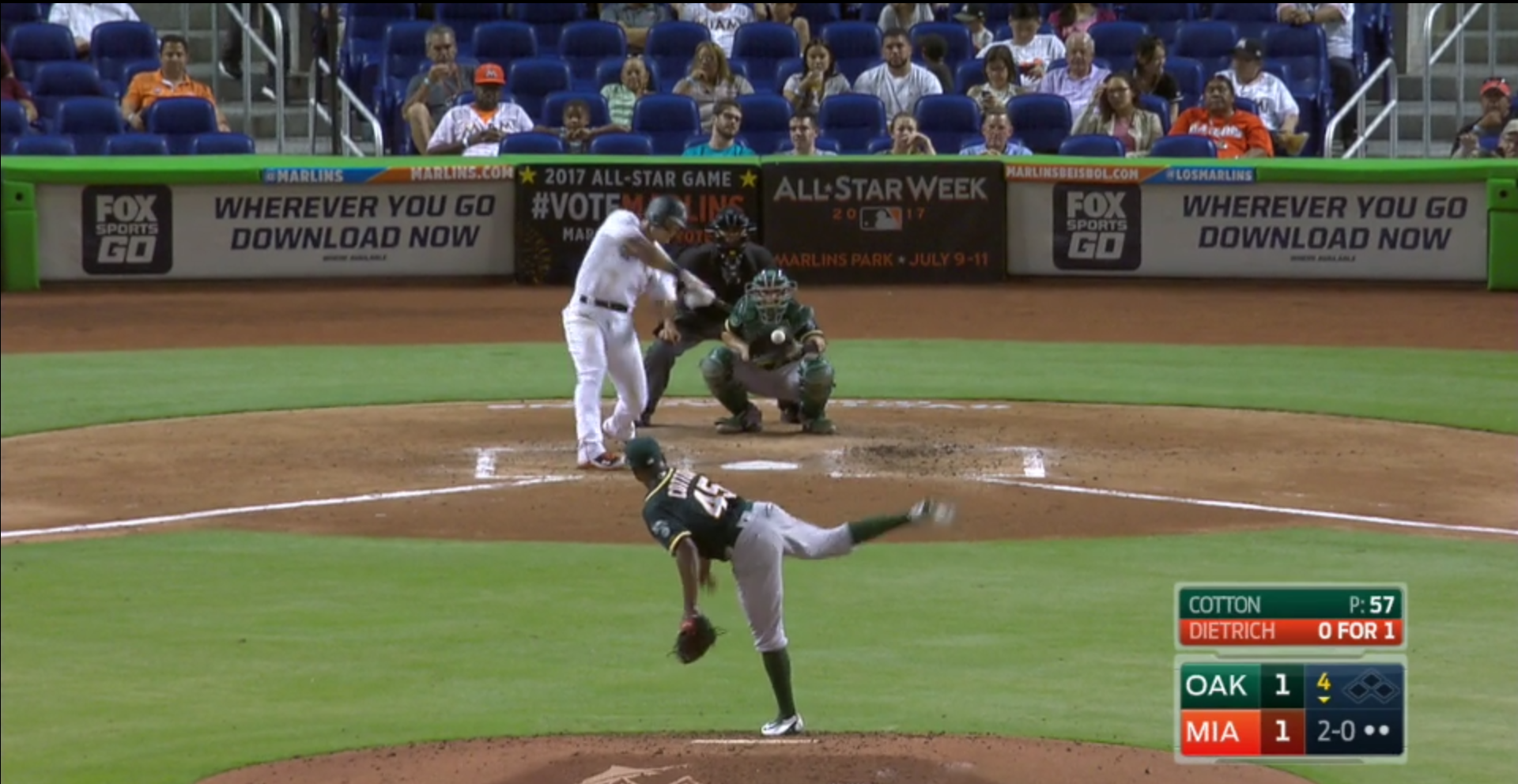 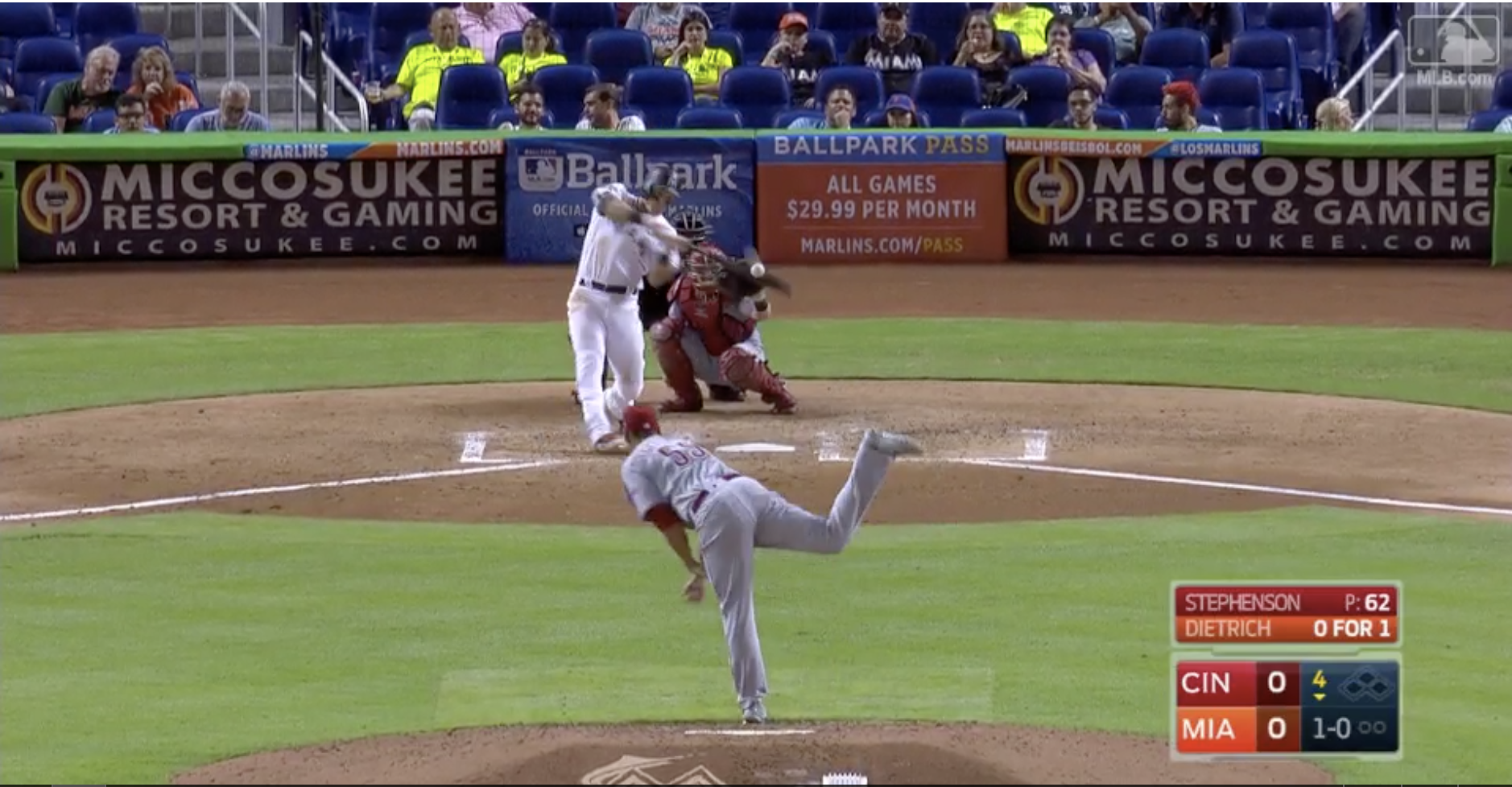 On the left, Dietrich’s shoulders and hips are not in sync with each other. While the lefty’s front shoulder has already peeled out of the box, his hips are still in the process of coming through the zone. As a result, Dietrich brings his bat over the top of the ball, and hits a worm-burner to first baseman Yonder Alonso.

On the right, despite the fact that the ball is up and out over the plate, Dietrich is able to pull the home run to right-center field. The difference in the swing is clear-as-day: Dietrich’s hips and shoulders are both completely squared up through the ball. Just as Stanton closing his stance has prevented him from peeling out with his front shoulder, the added leg kick delays Dietrich’s torsion in the box until his foot hits the ground. His mechanics line up perfectly, and the result is harder, more centered contact — a home run into the bushes in right-center field.

Dietrich’s heat maps are a true testament to the efficiency of his adjustment. While he has always been a been a proficient low-ball hitter, in the past two weeks, Dietrich’s numbers against balls up in the zone have improved greatly. Below is a comparison of his slugging percentage heat maps prior to July 26, and after July 26. 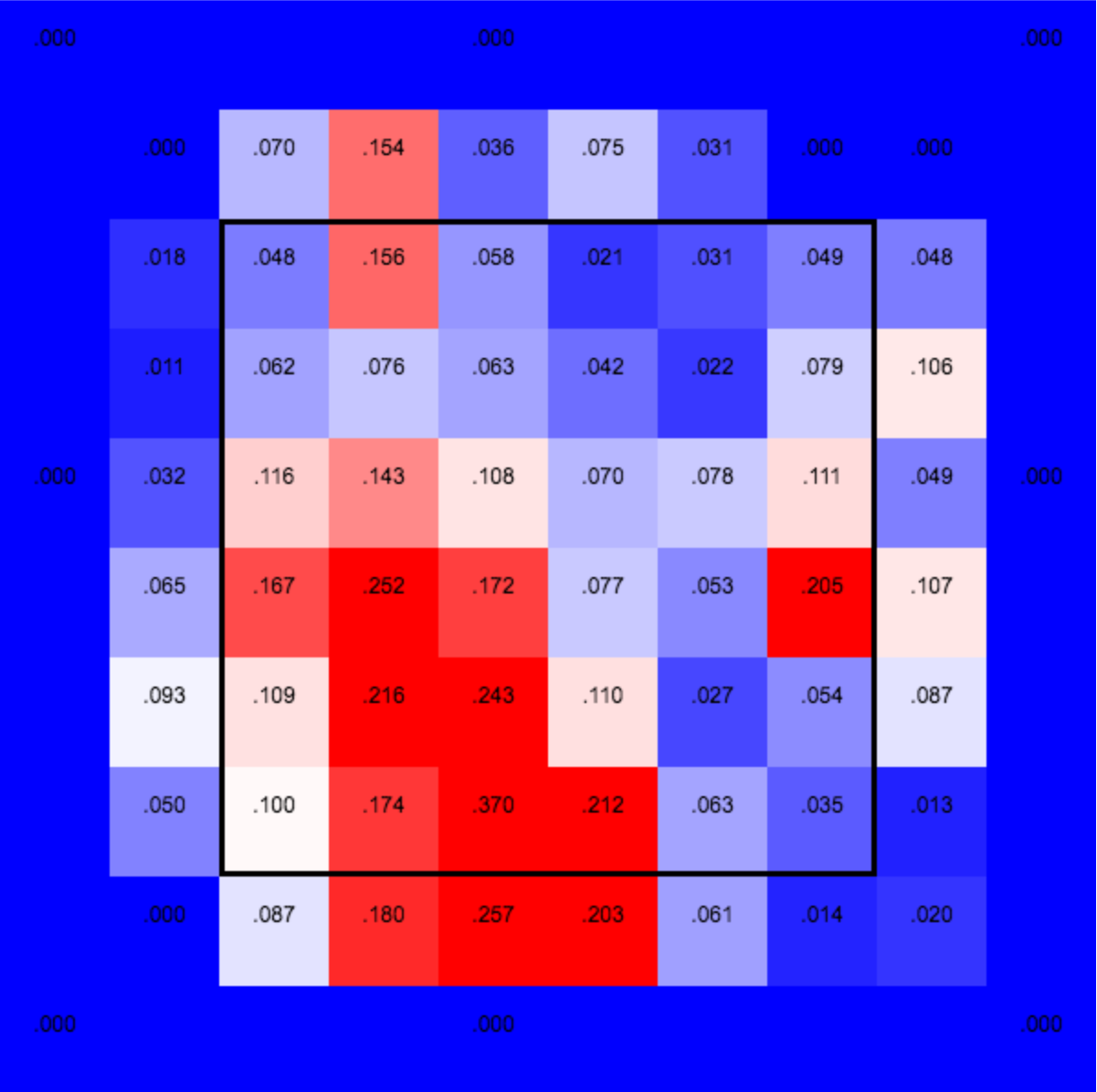 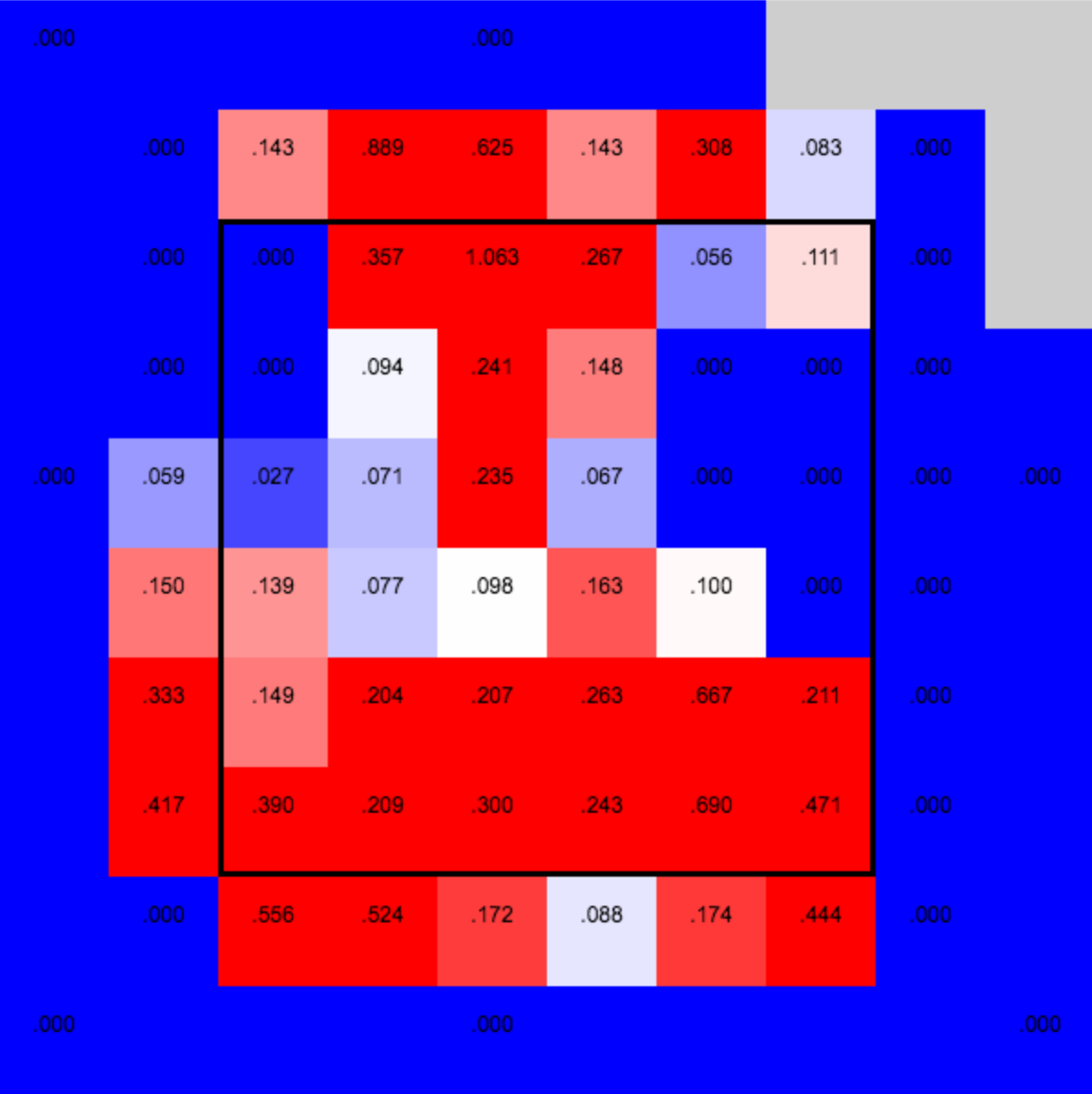 You can see it in the picture of Dietrich’s swing against the Athletics — before, Dietrich’s old swing forced him to roll over on high pitches. Now that Dietrich’s timing is improved, he’s enjoying increased plate coverage and is squaring up the ball better. While still dropping the barrel on pitches low in the zone, he is finally driving high pitching, rather than swinging over the top of it.

If comparing a home run swing to a groundout swing troubles you, here is a picture of Dietrich’s swing on a two-run single from the Marlins’ August 8 victory over the Nationals. Coming up with the bases loaded against the sidewinder Oliver Perez, Dietrich chases a fastball over the outside edge.

You can find a video of the at-bat here.

While you won’t find Dietrich’s swing here in an instructional video, it is illustrative of his increased plate coverage. Whereas in June, Dietrich would have rolled over that sucker and trickled a three-hopper to Adrian Sanchez, here he was able to keep his bat head in the zone long enough to drive the pitch out to right-center.

Although they are not mathematically eliminated, the Marlins are 15 games behind the Nationals and 10.5 games out of the NL Wild Card. With new ownership on the way in and the potential for a busy offseason looming, Marlins players are almost certainly now playing to solidify their future roles in the league, while also trying to spoil some contenders’ chances of making the playoffs down the road.

Derek Dietrich, who is a fan favorite with the Marlins, is again in contention to win a firm spot with the team. In each of the past three seasons, Dietrich has played in at least 90 games, and has accumulated a Fangraphs WAR of 3.4 over his five years with the Fish. After qualifying for arbitration last year, Dietrich opted to settle with the team, ultimately signing a one-year contract for $1.7 million. The favorable settlement was due much in part to the fact that Dietrich proved himself a worthy fill-in for Dee Gordon, who was suspended 80 games for PED use. In the wake of Gordon’s absence, Dietrich accrued a career-high 2.0 WAR and recorded an impressive .374 on-base percentage.

This year, the again contract-less Dietrich has scuffled through much of the season. Compared to last year, if the season ended today, his current totals would not garner him such a kind offer from the Marlins brass. However, in the theory of primacy and recency, recency is half of the equation — if the future Marlins owners are out there watching the games, and if Dietrich can remain hot for the rest of the season, he’ll leave a good taste in the front office’s mouth, and will increase his chances at returning as an ever-essential utility player.