Breaking Down the Trade of David Phelps

Share All sharing options for: Breaking Down the Trade of David Phelps

Ed. Note: Mitch Custer was our very first hire in the most recent Fish Stripes staffing initiative (still going on btw if you’re on the fence about applying), and I think you’ll agree that he’s a good one. Mitch is a long-time Fish fan who will be (mostly) doing late-week analytical work for us. Please join us in welcoming Mitch to Fish Stripes! - TB

Earlier on Thursday, the Marlins completed their second of potentially many trades to come this deadline season. In exchange for four prospects from the Seattle Mariners — Brayan Hernandez (OF, Low-A), Lukas Schiraldi (RHP, Adv. A), Brandon Miller (RHP, A), and Pablo Lopez (RHP, Adv. A), the Marlins sent versatile pitcher David Phelps to the Great Northwest.

Although even the warring factions of Marlins Nation can generally agree that the sale of our bullpen is inevitable, the reactions to Phelps’ departure were surprisingly mixed.

Some people hate to see him go...

Such a solid arm in relief, going to be a big hole to fill

Good player. Good luck David. I wish we could trade some of these fans tbh

...but others love to watch him leave.

Meanwhile, the folks over in Seattle seem to be more than content with their acquisition. Both feelings are understandable — Phelps has been great at times and Phelps has been bad at times. Let’s take a look.

At first glance, the numbers indicate that Phelps was indeed, for a time, a reliable pitcher. In 2016, Phelps came into his own as a reliever and cemented his reputation as a late game asset with bona fide strikeout stuff. Attaining personal records in ERA (2.28), FIP (2.80), HR/9 (.62) and K/9 (11.84), Phelps put an accent on his career year — following a short stint as a starter — by finishing the season with nine consecutive scoreless outings in relief. As Jeff Sullivan of Fangraphs mentioned in his article today, Phelps’ abrupt success was a product of vastly improving his fastball velocity.

While Phelps is nearly 31, he had his big breakout in 2016. What was behind the surge in performance? There’s not much of a mystery. Phelps started throwing a whole lot harder. He pitched better as a consequence. The relationship there is direct. Where Phelps previously worked with his fastball in the low 90s, he started to hang around in the mid 90s, and everything was peaches. It’s hard to go wrong when you gain three ticks, and Phelps, for the first time, piled up the strikeouts.

His performance metrics in 2016 correlate with his Win Probability stats. Phelps’ performance on the bump racked up a 1.66 WPA/LI, meaning that even after neutralizing the effect of coming into games late in high-leverage situations, he was still worth 1.66 wins to the Marlins. Finally, Phelps accrued a career high WAR of 1.9. Although fans may sometimes be quick to harken back to Phelps nine “meltdowns” from that season, by all metrics it is evident that Phelps was an efficient and valuable pitcher.

Unfortunately, the Dr. Jekyll of said impressive 2016 gave way to Mr. Hyde in 2017. This season in 44 games and 47 innings, Phelps has only been worth .13 wins in value and has amassed a WAR of just 0.3 From 2.28 and 2.80 in 2016, Phelps’ ERA and FIP have jumped to 3.45 and 3.69, respectively. What’s been the difference for Phelps in just one year? A combination of backing off of his fastball and completely abolishing his use of the changeup has resulted in career high watermarks for his home run metrics. While throwing his electric fastball close to 10% less, he has completely replaced the changeup with his curveball and cutter. The result: Phelps is getting tattooed. From his 2016 figures, HR/FB ratio is up from 9.2% to 13.2%, BABIP is up from .286 to .308, and of most significance, his hard hit rate is up to 35.2% — close to 10% higher than the year before. In just over half of his workload from the previous year, Phelps has near matched his home run total from last year and has allowed just 19 fewer hits.

By his one year transformation, it’s apparent that Phelps may not be familiar with the ol’ cliche: “If it ain’t broke, don’t fix it.” Why he has decided to bail on his moneymaker pitches is a question only he knows the answer to. As more and more hitters hone in on fastball velocity, the changeup becomes increasingly important. Although his pitching charts reflect that David Phelps has an incredibly consistent release point, the fact remains that detecting a curveball will always be easier than detecting a changeup off of a fastball. The lack of an effective out pitch has led to more in-the-zone contact and less-outside-the-zone contact for Phelps. Ultimately, as batters lay off the junk, they have forced Phelps into throwing his fastballs in the zone. The results are clear; batters are sitting dead-red, and are clobbering the fastball. 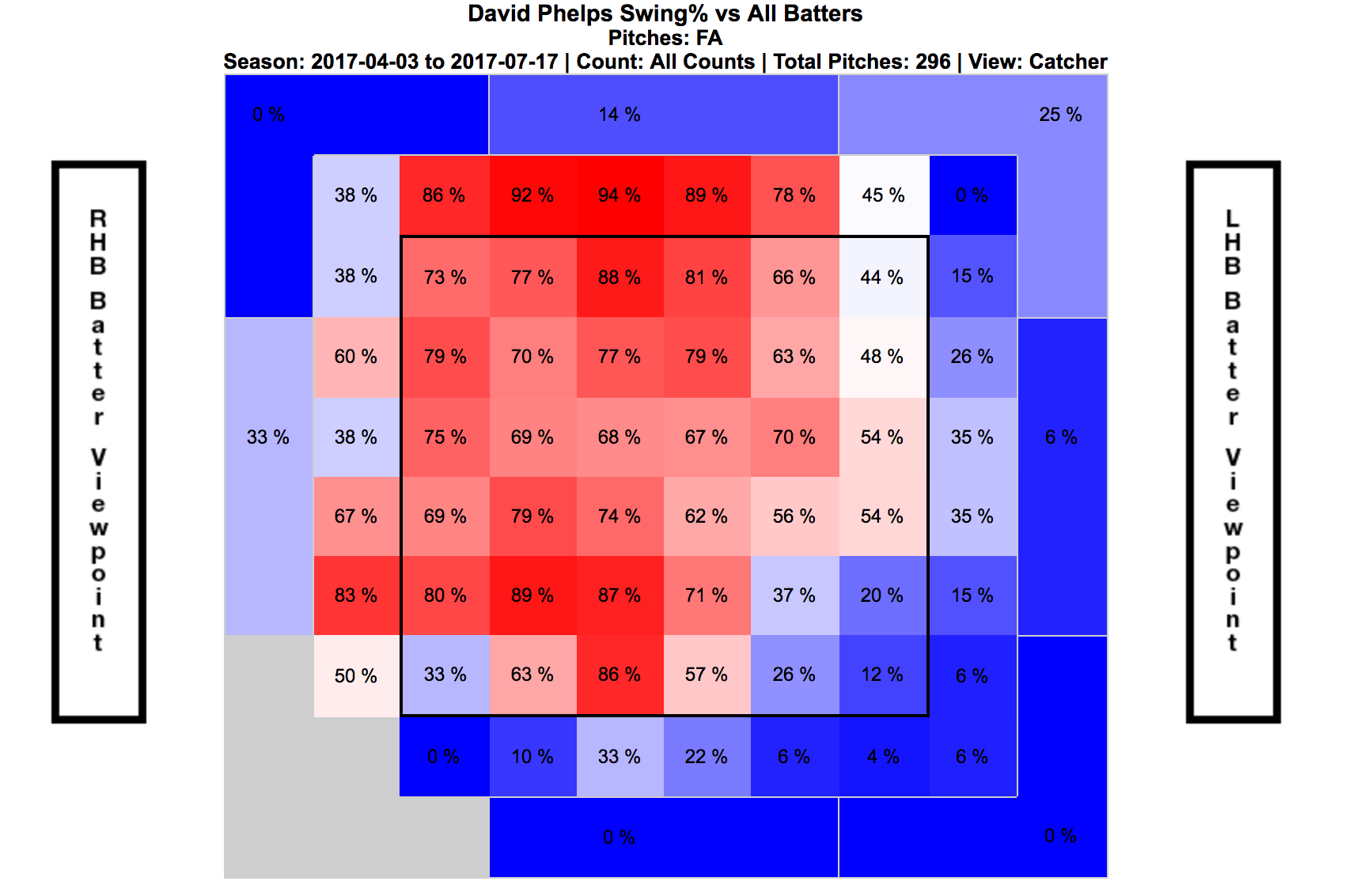 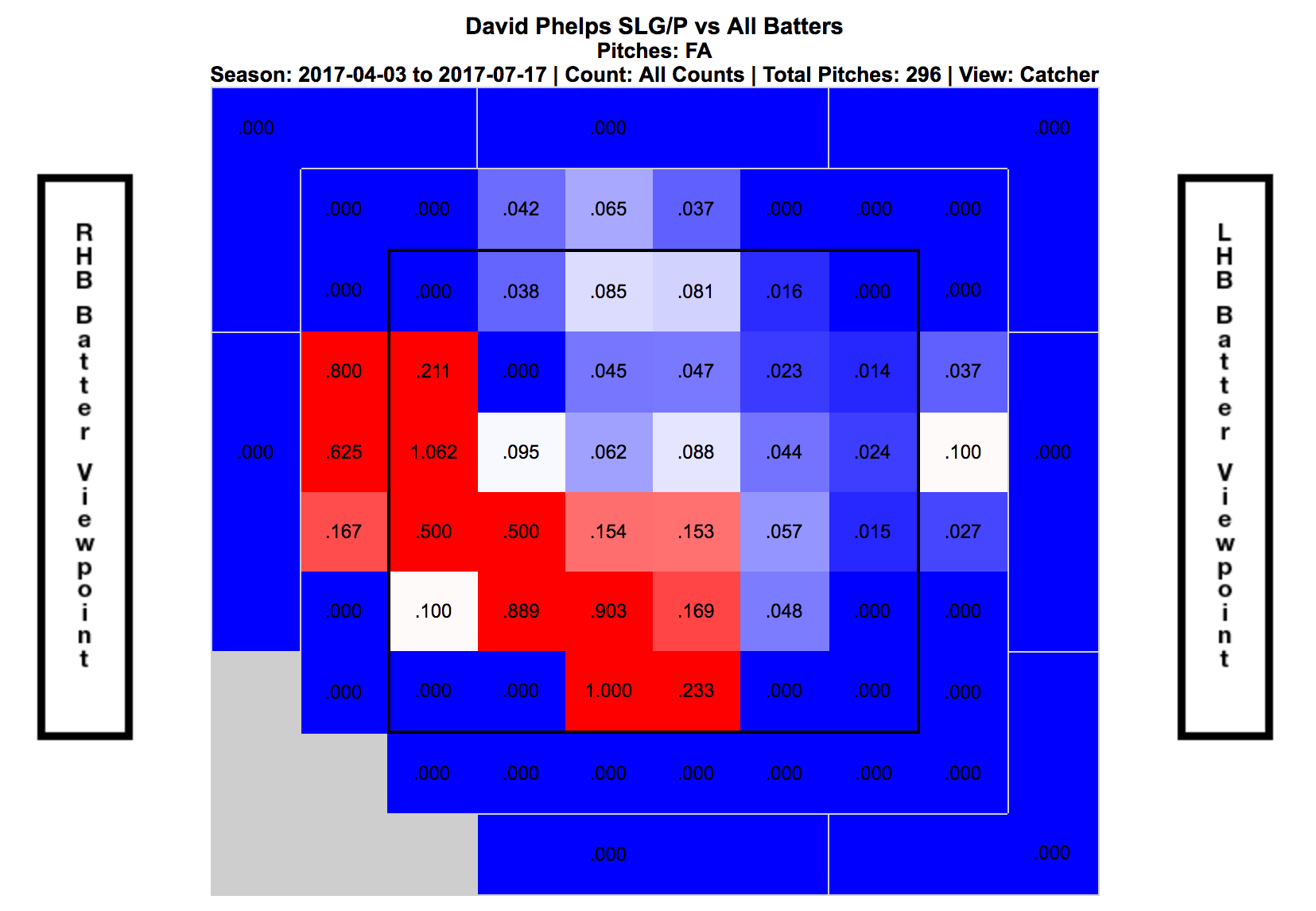 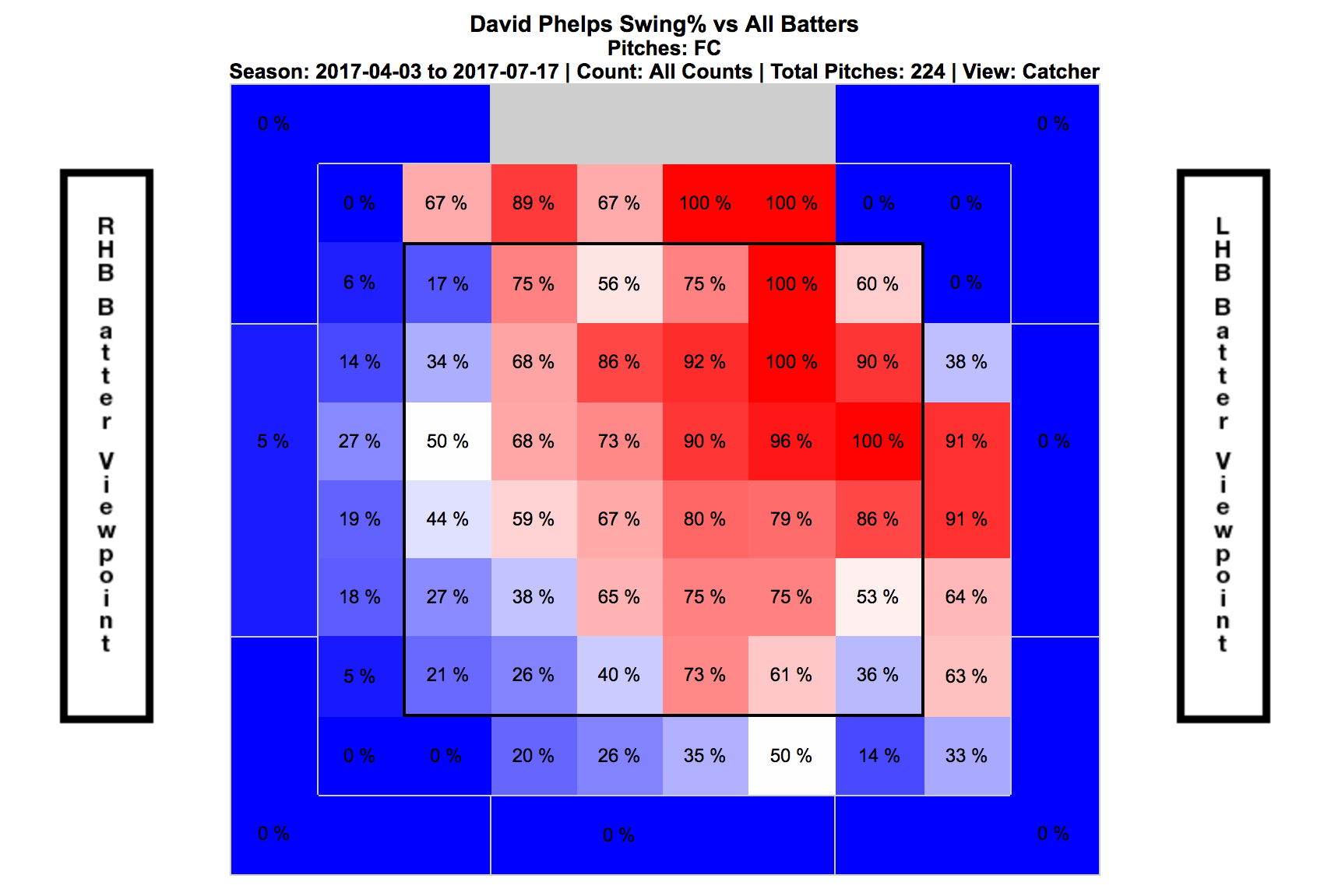 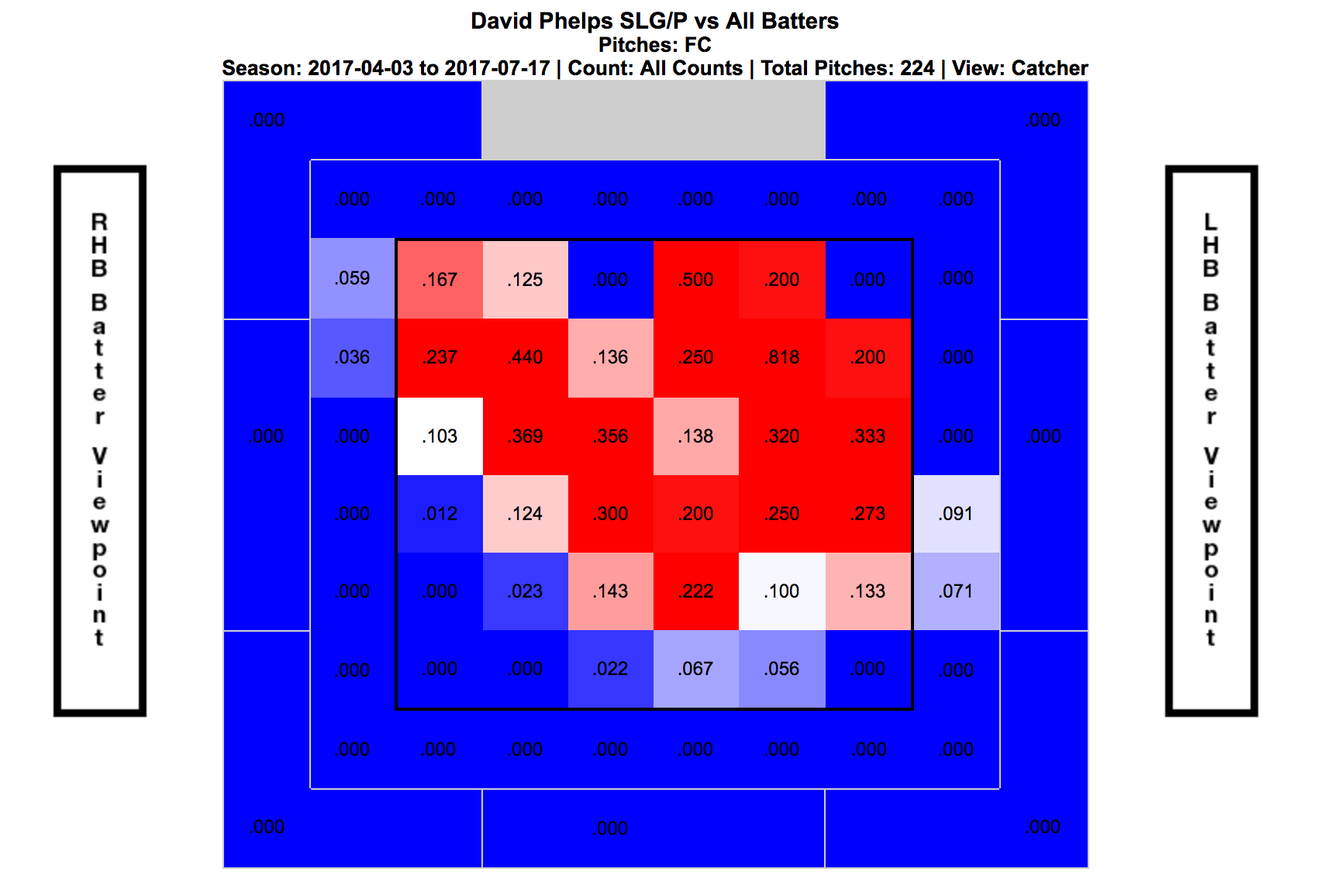 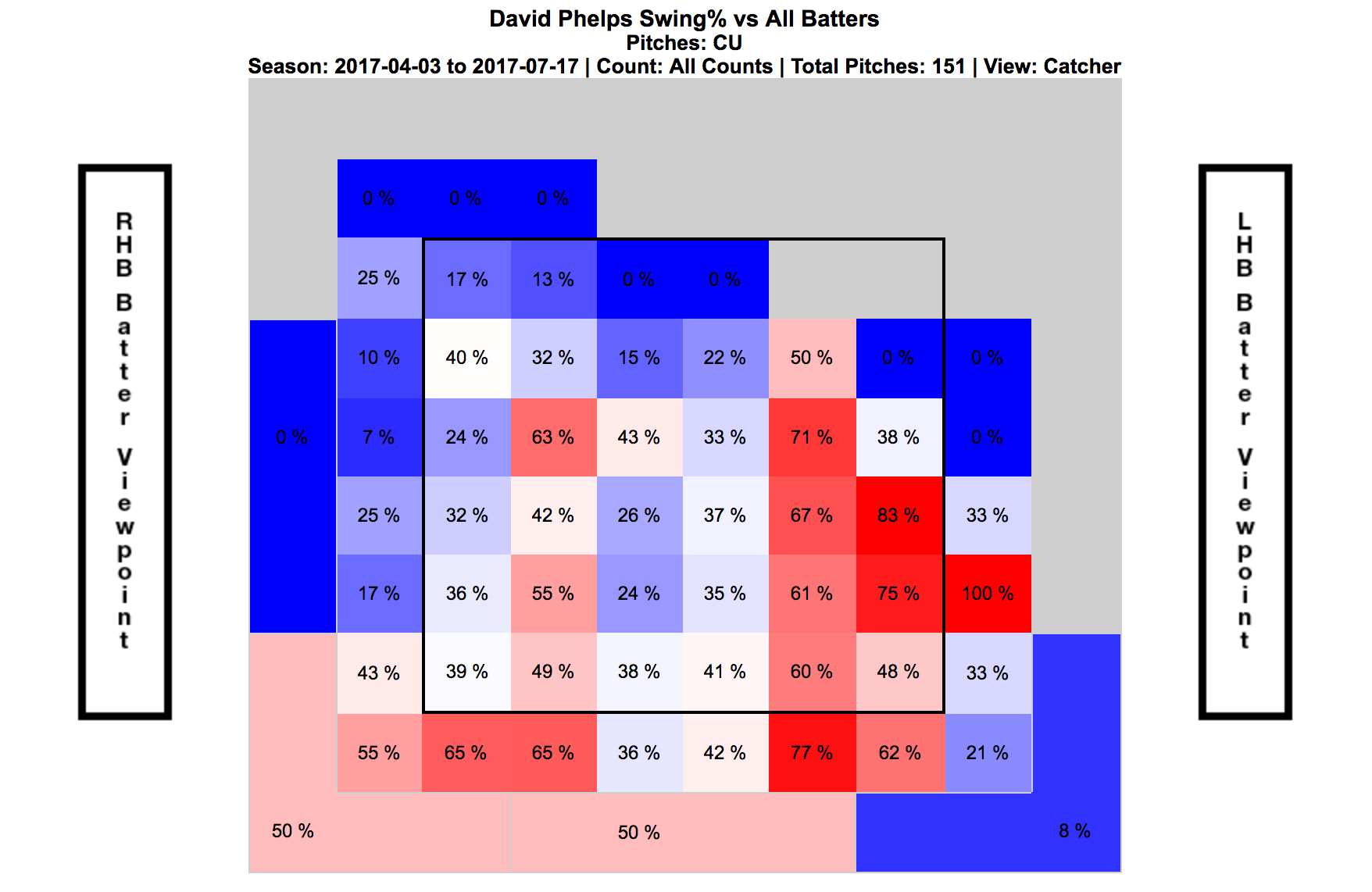 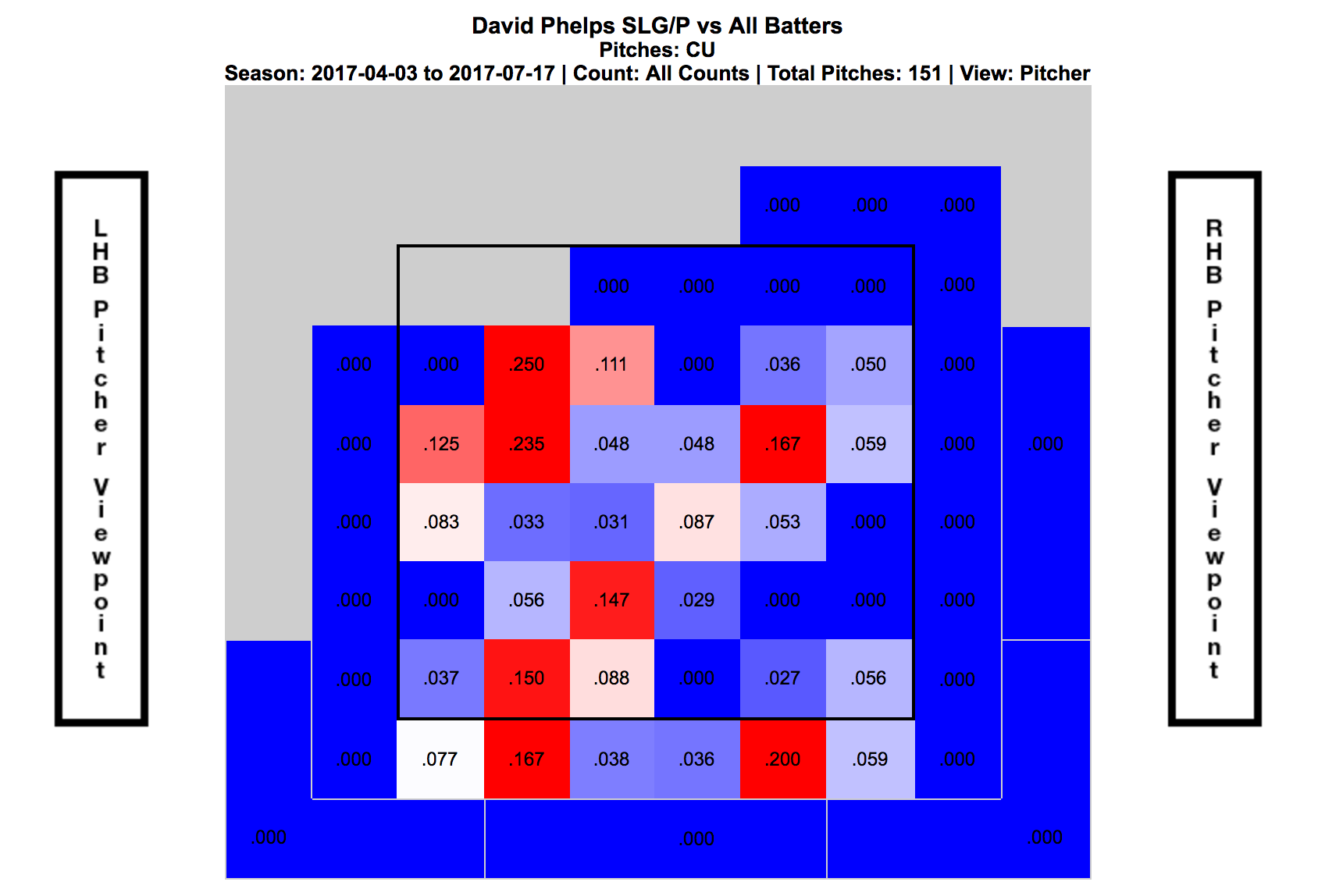 Thus, the mixed reactions of Marlins fans. The Fish Faithful has seen Phelps at his best and Phelps at his worst. On September 30, 2016, David Phelps struck out the side against the Washington Nationals, attaining the highest WPA that day among pitchers, and helping the Marlins go on to win 7-4. Six cold, miserable, baseball-less months later, Phelps ripped out the hearts of fans everywhere, allowing home runs to Bryce Harper and Adam Lind late in the game, and spoiling what was otherwise a glorious Opening Day. While true that Phelps was probably over-scrutinized by Miami fans bearing the scars of previous abusive relievers, the stats reveal that there are grounds to both: appreciate his contributions to the team, but also take solace in his exchange for prospects.

When you pair the bipolar nature of Phelps’ stats with the unknown potential of four young, rambunctious, low-level prospects, it is hard to say for sure who won this trade. For Marlins fans, the move is at least a breath of fresh air, as the Marlins have now dished two members of their stagnant core — Phelps and Adeiny Hechavarria — in the interest of adding six prospects to their notoriously ailing farm system. It’s fun to watch; after staying on the sidelines and watching the Yankees and White Sox top off on prospects, it feels awesome to finally get in on the action.

The relievers in AAA who are members of the 40-man roster are Hunter Cervenka, Justin Nicolino, Drew Steckenrider, Odrisamer Despaigne, and Brian Ellington. The departure of Phelps marks just the first opening in what could be — in a matter of weeks — a very different looking bullpen. As rumors swirl and the Marlins draw more interest in AJ Ramos and other supporting cast members, the window for these relievers to step into the spotlight draws increasingly near.

I can see it now; as Jerry Dipoto sits and watches the Mariners from his skybox, he munches nervously through a bowl of Safeco grasshoppers, anxiously awaiting the arrival of his newest reliever. With the weight of Seattle on his back, he ponders: “Did I make the right choice?” The answer will all depend on who knocks on the clubhouse door tomorrow. Will Dr. Jekyll dig up his changeup and bring it to Seattle? Or will Mr. Hyde be the one taking the ball for the M’s this weekend against the Yankees? The answer will reveal itself in due time, and at that point, we’ll be more prepared to say who won and lost the trade.