Last Friday, I was in attendance at Marlins Park when the Fish graciously hosted the NL West-leading, Los Angeles Dodgers. After grinding through four innings and yielding only one run, Dan Straily ran into a buzzsaw as Yasiel Puig and Corey Seager each launched home runs into the far reaches of the stadium. Although Straily’s pitch count after the Seager blast was only in the 80’s, with the pitcher’s spot due up to lead off the bottom half, Mattingly decided to send Ichiro! to the dish in Straily’s place. That’s when the screen over the bullpen illuminated with Junichi Tazawa’s name, accompanied by one sole tidbit of information: his ERA, at 5.63. With the score just out of hand, and Tazawa’s early season struggles fresh in my mind, I wondered: Why were we going with Taz in such a crucial time of the game?

Before I even had a chance to worry, Tazawa would come on to dispatch Cody Bellinger, Logan Forsythe, and Joc Pederson on just seven pitches; a ground out, a strike out, and a line out. As it turns out, this was just one of eight stellar outings Tazawa has churned out in July.

As of the 1st of the month, Taz has turned his season around: In nine innings pitched, he has not allowed a single run, and has walked just two out of 33 batters faced. Although in just 18 innings over April, May and June, Tazawa walked 10 and recorded a FIP of 7.02, he has bounced back, attaining a stellar FIP of just 2.24 halfway through July. In four of his eight July outings, he has increased the Marlins win expectancy by at least 6%, giving him credit for four “shutdowns.” On a team that constantly relies on its bullpen, Tazawa has been nothing but a pleasant surprise. What is the culprit behind Tazawa’s success? What has Ole St. ‘Nichi done to give the Marlins this early Christmas gift?

For one, he is coaxing more uncomfortable swings and more swing-and-misses out of batters. As compared to his recorded swing and contact percentages of 45.8% and 82.0% from April to June, Tazawa has increased swing rate in July to 55.3%, while lowering his contact rate to 76.2%. Additionally, Tazawa is getting 11.6% more swings and 5.8% less contact on pitches outside of the zone in July than he was forcing in April/May/June. Although the logical inference is that getting more swings outside of the zone is creating softer contact for hitters; that’s not the case here. In fact, this aspect of Tazawa’s batted ball data is the only data that has taken a hit in July – his percentage of soft contact allowed is down by 6%, while his percentage of hard contact allowed is up by 6%.

The actual difference maker is at the other end of the batted ball screen – the biggest factor in Tazawa’s recent success has been his ability to keep the ball out of the air. From April to June, Tazawa recorded a fly ball rate of 51.9%, with a 17.9% home run-to-fly ball ratio and a ground ball rate of 27.8%. In stark contrast, Tazawa in July has allowed no home runs and fly balls on just 29.2% of his pitches, while hoisting his ground ball rate up to 37.5%. For those of you without your calculators, Tazawa is allowing 22.7% less fly balls and getting 9.7% more ground balls in July than he was getting before the start of the month. Although the sample size is concededly smaller than we would like to have to accurately analyze the batted ball data, we can compare those rates to his 2014 season, in which he recorded a 2.86 ERA in 63 innings pitched; there, he incurred a ground ball rate of 36.5% and a fly ball rate of 30% -- figures similar to his July rates. In the end, you can argue all you want about how predictable or sustainable these July figures are, but the main takeaway here is this: Tazawa’s Achilles heel from April to June was his 51.9% fly ball rate.

Tazawa’s recent success is due in part to his ability to keep the ball out of the air. Fangraphs

We know that while Tazawa throws four pitches, he makes his bread and butter with the fastball and the splitter. Tazawa has returned to the splitter and relied less on the fastball in July than he did in the first half of the season. A paradigm shift currently rippling through the league is the belief that hitters are finally adapting to velocity, and as a result, the fastball is becoming less effective and increasingly hittable. A glance at Tazawa’s heat maps will show that it is not only his pitch selection, but also improved location that has contributed to his late success. He’s working the edges more frequently with his fastball, and he is keeping his splitter out of the middle of the plate. Specifically, in contrast to his splitter heat map for April/May/June, the only “hot” area for Tazawa’s splitter location in July is in the dirt, a location he has frequented about 6.8% more. Keeping the ball out of the middle of the zone is always a must for pitchers, but it is absolutely crucial today for splitter pitchers and sinker throwers; with more and more batters adopting the approach of dropping their bat barrels to create elevation in their swings, the splitter/sinker becomes increasingly prone to get hammered. Again the sample size is small, but the correlation makes sense; by keeping the splitter out of the zone, Tazawa is getting barreled up increasingly less in July, which is evidenced by the severe decrease in fly ball rate. It’s science, you guys. 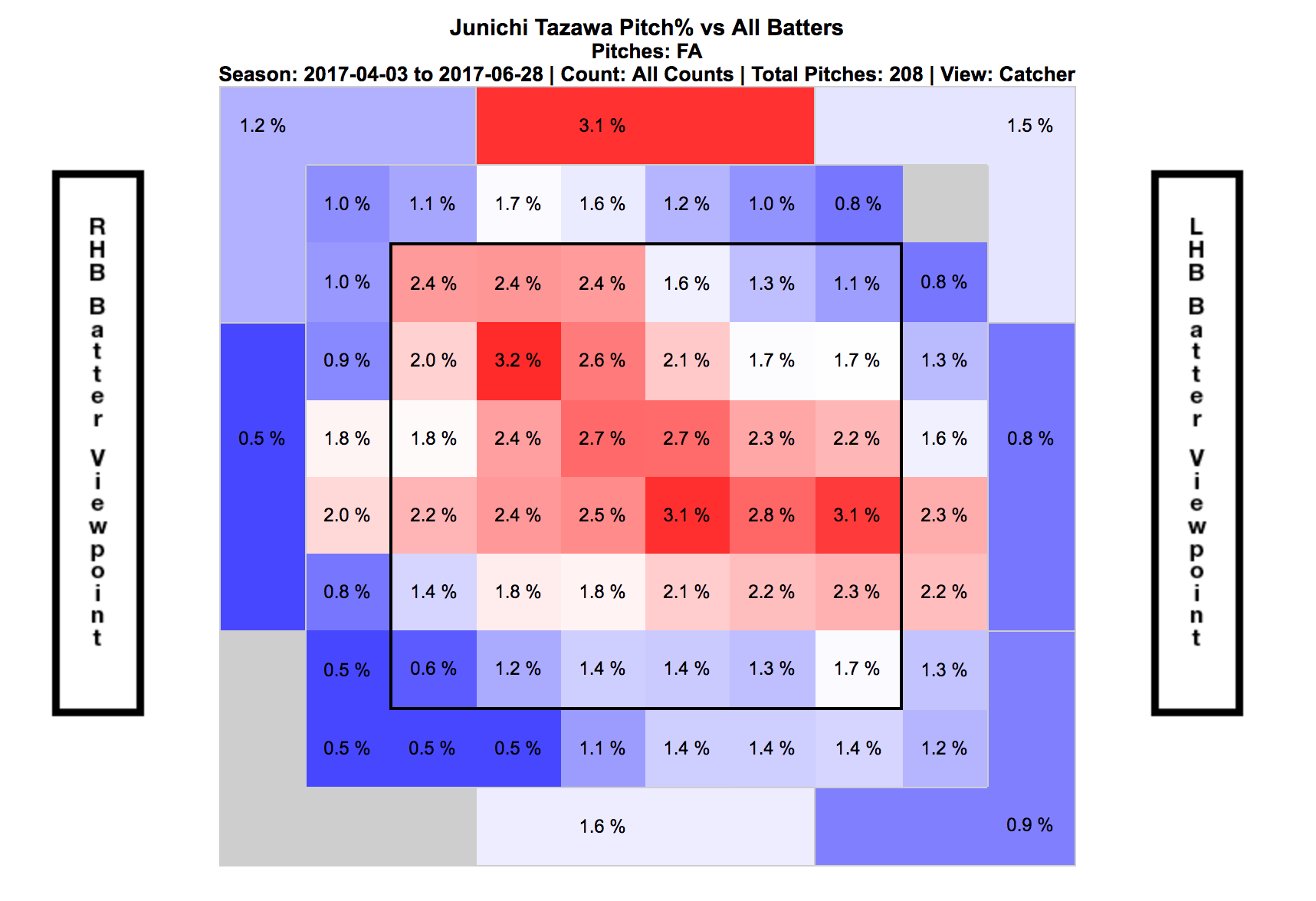 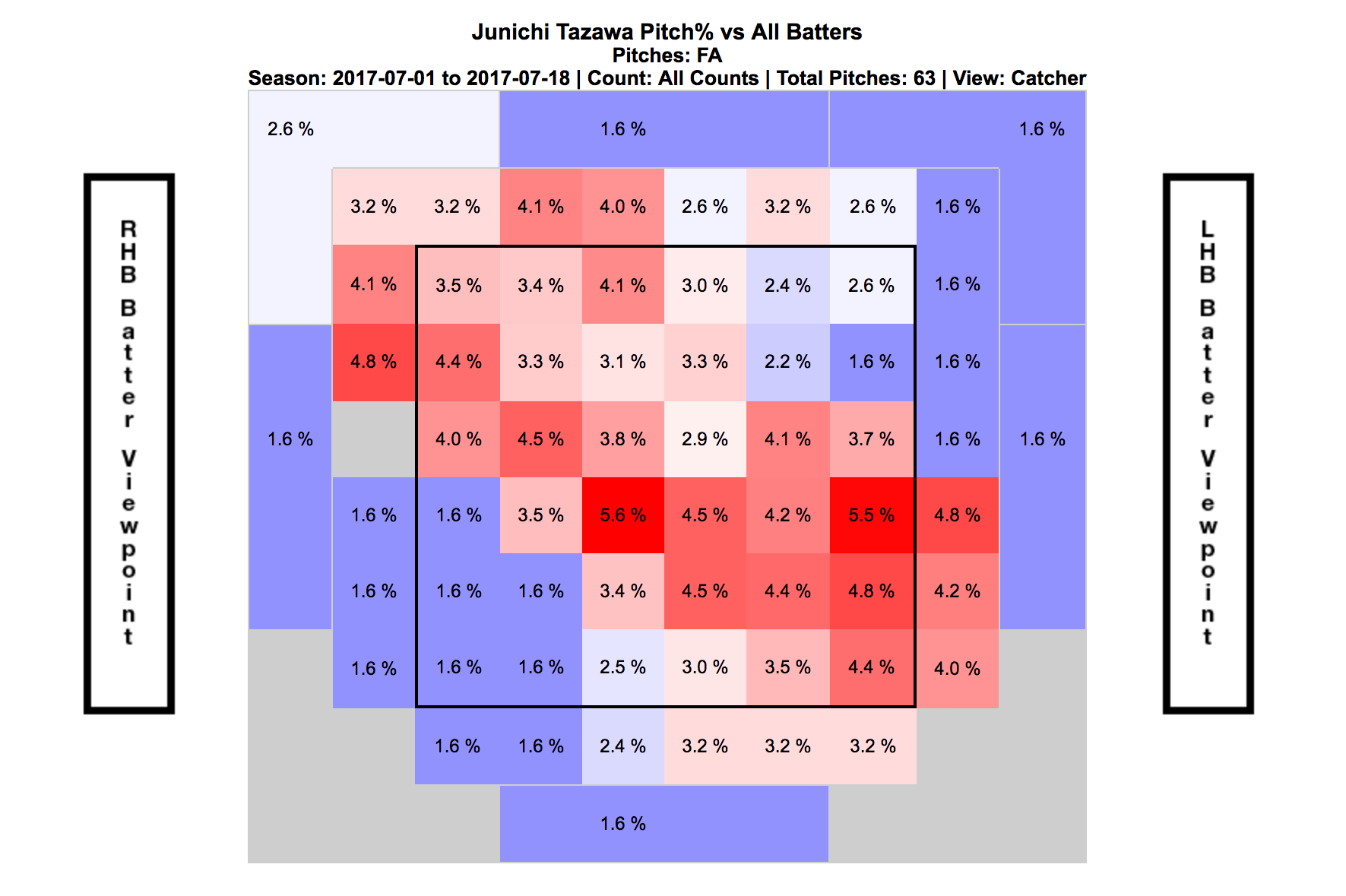 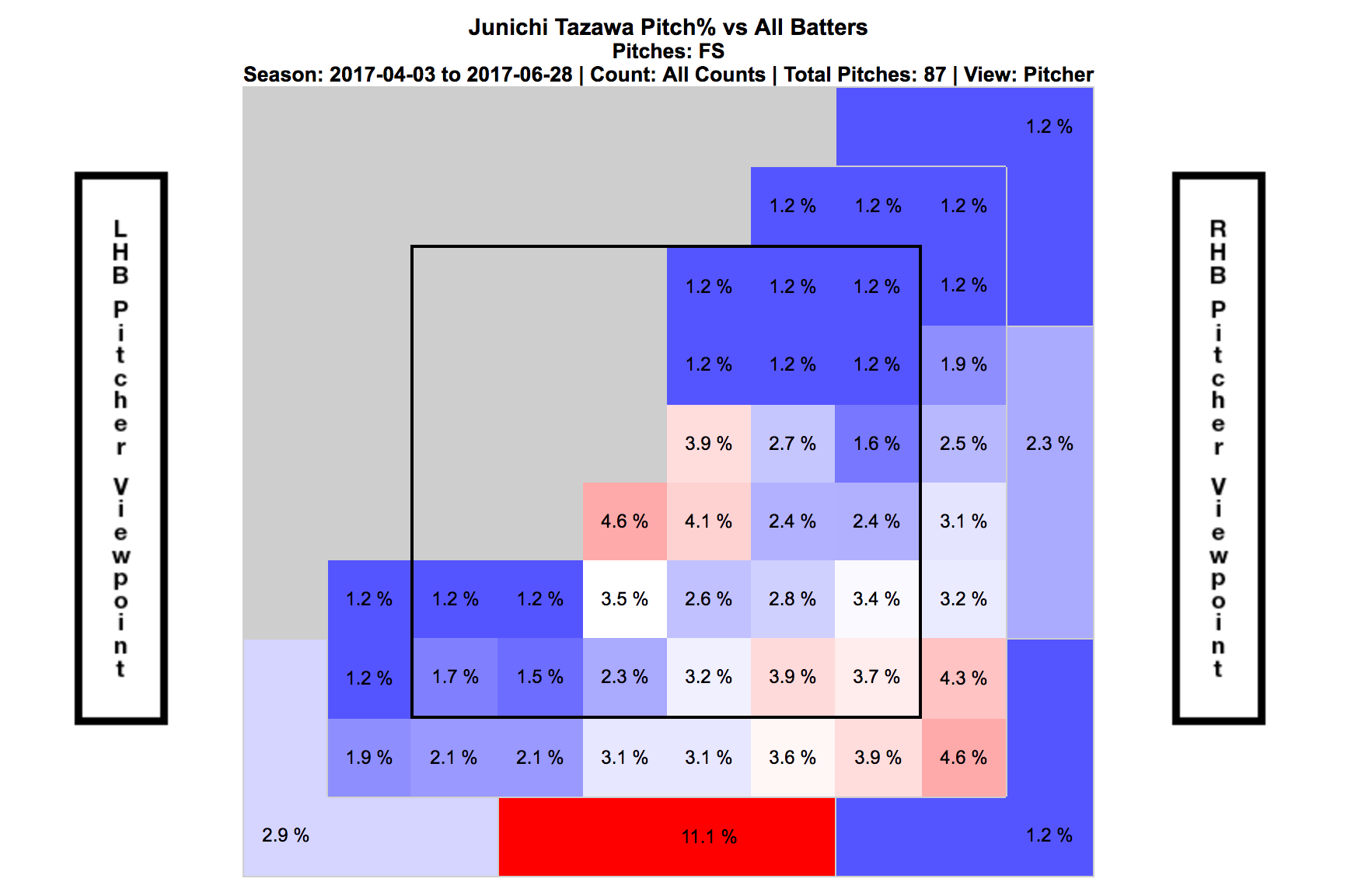 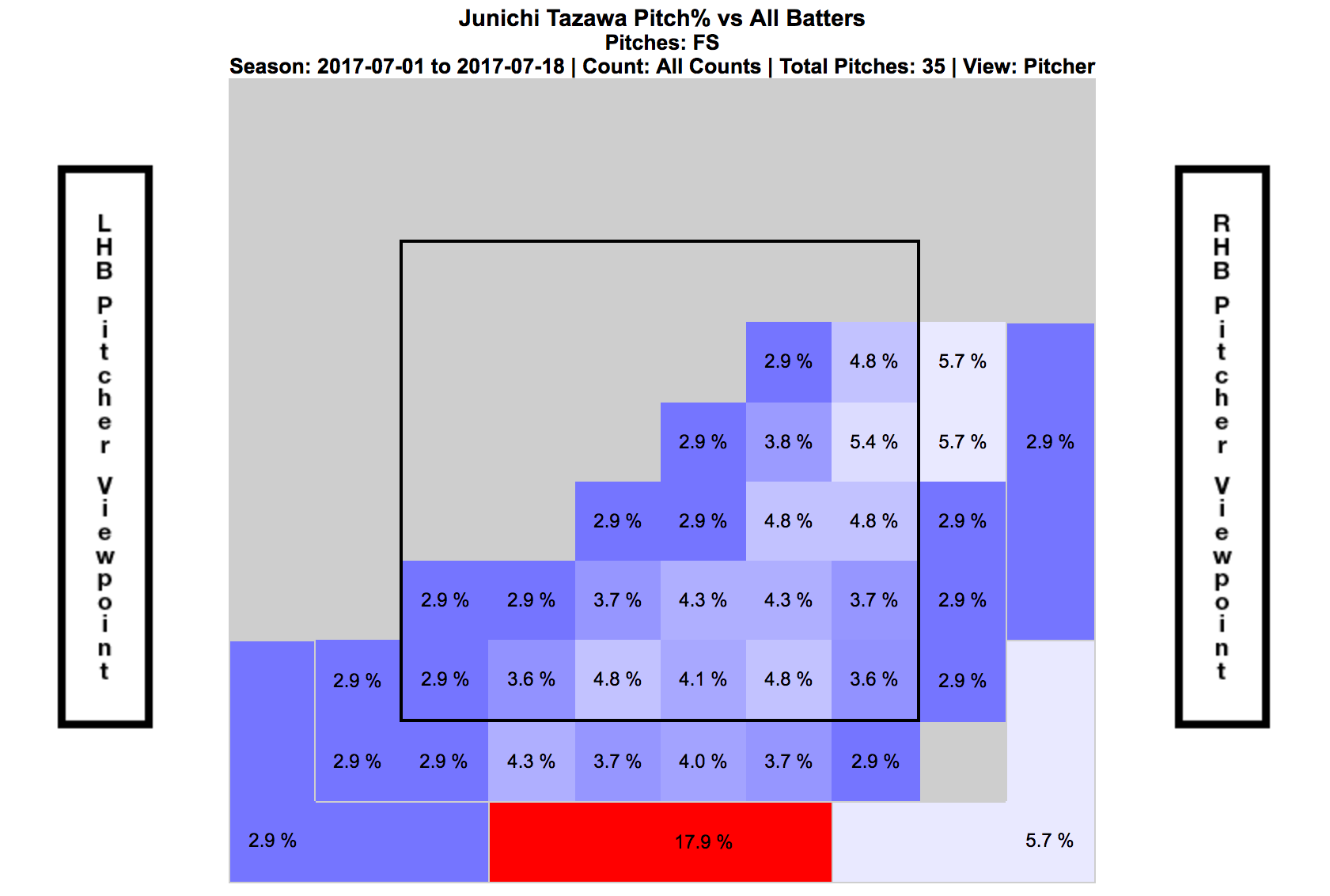 Getting results from a low-leverage reliever can be huge for a team with a struggling rotation. Being able to rely on consistent middle relievers after shorter outings from starters is an under-appreciated asset. Back to the Marlins/Dodgers game, after Tazawa breezed through the 6th, I envisioned the game plan unfolding perfectly; five innings for Straily, then Tazawa passes the ball to Kyle Barraclough, to David Phelps, and then to AJ Ramos for the save. For any team, this is as ideal a set up as you can probably imagine, and although the closer is the first to shake hands at the end of the night, it’s still imperative that the middle guys do their jobs and hold the lead. Tazawa has done just that this month, and on Friday the 14th, he certainly gave the Marlins a chance to take down the titans of the NL. In the bottom of the 5th, the Marlins had a quick answer for the Boys in Blue, taking a 3-2 lead on RBI doubles from Giancarlo Stanton and Justin Bour. After Barraclough and Phelps both retired the side in order, a smile crept across my face in the 9th as AJ Ramos faced Joc Pederson with two outs. To make a long story short and less painful, the Dodgers ended up winning the game 6-4.

But amidst the Marlins recent struggles, Junichi Tazawa’s efforts have not gone unnoticed by the coaching staff. After Monday’s game against the Phillies, Don Mattingly gave the middle reliever props for pitching another 1-2-3 inning and helping maintain the lead in what would be an extra-innings win against the Phillies. Certainly, Tazawa has gained some of The Skipper’s Trust™, as 1/3 of his appearances this year have come in the last half-month. Let’s hope he can keep it up.