After a second straight game with a blown save, the Marlins are undoubtedly pondering a decision with embattled closer Steve Cishek. That decision has many questions weighing on it.

Share All sharing options for: Miami Marlins have difficult decision with Steve Cishek

Just yesterday, I looked at Cishek's mechanics and early peripherals and saw a guy who was similar to his 2014 version, but a good deal less effective so far. He was walking more guys, striking out fewer hitters, and not working within the confines of the strike zone as he had in the past. All of that points to at least some early problems involved "skill" numbers like strikeouts and walks rather than luck-affected data like hits or runs allowed. A good chunk of Cishek's struggles in 2015 are due to Cishek's poor performance on things he can control.

After a second straight blown save, it is easy to react emotionally to the situation. A lot of fans would call for Cishek to be demoted from the closer position, and manager Mike Redmond undoubtedly faces that decision in the coming days. Since 2012, Cishek has been one of the better relievers in baseball. He amassed a 2.72 ERA and 2.63 FIP in that time period, which encompasses nearly 200 innings pitched. In the last 11 innings, did we really learn something drastically new about Cishek? The 11 1/3 innings he has pitched thus far this year encompasses about 17 percent of a season for a reliever of his role, but it is also a smidgen of data. We would never judge a starting pitcher by 11 innings. We would never change our opinion of a guy after, say, 10 bad Spring Training innings, reliever or starter. What is so different now?

Part of the reason why we as fans are more inclined to change our opinions is because of the leverage aspect. A spot starter or a sixth- or seventh-inning guy could put up four bad outings out of 12 and probably go relatively unnoticed because those outings tend to occur in less important situations in the game. We attach more urgency emotionally to the ninth inning, and probably as a result we may be accepting the on-field results as reality based on that. The finality of the ninth inning could be affecting the way we view the finality of Cishek's stats as they pertain to his future.

If there is any suspicion of something being wrong, even against the data-based likelihood, the Fish owe it to the team to remove Cishek from this most important of relief roles.

At the same time, there is a real consequence to pitching poorly in the ninth inning. The leverage of late-game situations cannot be ignored, and the Marlins certainly do not want to keep losing close games. If there is any suspicion of something being wrong, even against the data-based likelihood, the Fish owe it to the team to remove Cishek from this most important of relief roles.

Then again, the question becomes just how much worse do Redmond and the Marlins feel Cishek is compared to his replacement, likely some combination of Mike Dunn and A.J. Ramos? That gets back to the question of "what is wrong with Steve Cishek?" The answer changes your expectations.

If you think Cishek is mechanically busted, then your estimation of his play is in the toilet; he is essentially seen as replacement-level talent right now. In that case, should he even be touching the baseball in the majors? Should he be getting any leveraged situations, or should he only pitch in mop-up duty while the coaching staff figures out what is wrong?

If you think Cishek is a worse pitcher than he was before, but he is not some busted toy with a dead arm, then you have to make some estimation based on his current and past performance. ZiPS came into the season expecting a 2.77 ERA, but the current rest-of-season projection sits at 2.99. Is that the reasonable estimate going forward, and if so, is that worse than Ramos, who is projected for a 3.08 ERA? With it that close, do you make the move, and for how long? 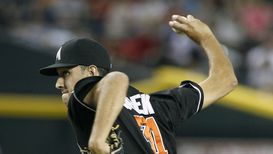 The final piece is the managerial aspect of assuaging a difficult clubhouse situation. Cishek is, after all, a human as well. He wants to help the team, but for whatever reason, it has yet to happen. How do the Marlins handle the closer situation without causing a fuss or eating into Cishek's confidence? Alternately, might throwing in low-leverage situations or working an "easier" inning help boost Cishek's confidence, provided he pitches well?

Does the coaching staff think something mechanical is afoot? For his part, Cishek does not believe that to be the case.

"I don't want to push the panic button now and try to reset everything," Cishek said. "Keep plugging away and grinding. Things can only get better from here."

At the same time, we had a direct Cishek quote from a 2015 interview with David Laurila of FanGraphs that states that he felt his overuse of his slider could lead to a lower arm slot and worse pitch movement, and Pitch F/X data suggests that he is using the slider as often as he did last year and pitching at a lower arm slot this season. Combine that with lower velocity at this time and there is some mechanical, "true" component to his pitches being worse.

With some mechanical evidence and the current projections being close, the likely best play is for Miami to turn to a committee approach for the short term. Ramos, Mike Dunn, and Cishek can pitch to matchups in the eighth and ninth innings, and Cishek and the coaches can continue to gather data to see if they can spot a mechanical issue. This also keeps him involved near the late innings, which assuages the potential emotional issue of being demoted so unceremoniously. Marlins fans cautiously await the eventual decision by Redmond.