The Miami Marlins' two slappiest hitters, Dee Gordon and Adeiny Hechavarria, have found some early success. How much of it is repeatable?

The Miami Marlins' offense received a sudden burst of success in the last few games. Before yesterday's six-run output versus the Washington Nationals, the Marlins' non-pitchers were batting .267/.328/.380, a modest .313 wOBA that ranked at right around league average. This is a far cry from the early problems the team was having, with everyone struggling in the first two weeks of the season.

Part of that just goes to show you that it's way too early to say anything definitive about the team. However, part of the recent success can be attributed to the slap-hitting success of two of the Marlins' most punch-less hitters, Dee Gordon and Adeiny Hechavarria. After yesterday, Gordon now leads the National League in hits and is batting an absurd .390/.407/.463 (.381 wOBA), second only to Giancarlo Stanton on the team. Hechavarria knocked a bases-clearing triple, is second on the club in RBIs, and is now hitting .333/.355/.500 (.370 wOBA).

Who would have figured that two of the lightest bats on the Marlins would helping lead the way? But is there anything going on underneath these numbers, or are these hollow batting averages with early-season hot streaks?

This is the obligatory portion of the program when I tell you that both players have absurdly high batting averages on balls in play (BABIP) at this time. A hot streak clearly is going to lead to such numbers, and we all know that those numbers will not stick around. Gordon is batting .444 on balls in play, while Hechavarria is hitting .373. Neither player should come close to that by the end of the year

One way to improve those batting lines is to improve on their discipline at the plate. The swing and contact rates for these players could point to early trends in their ability to avoid strikeouts and, as a result, inflate their batting averages.

Pitchers are not necessarily respecting either player, as both are seeing more than 50 percent of pitches sent their way in the strike zone. For Gordon, that has led to a more aggressive approach: he is swinging at a career-high rate so far this season. Those swings are not necessarily discerning strikes from balls, as he has posted career highs in swings in and out of the zone. However, given Gordon's reasonable contact rates for his career, that may not be a bad idea. If he can continue an 87 percent contact rate, swinging more often may give him a better chance at hits given how pitchers have attacked him.

On the other hand, Hechavarria has gone in the opposite direction. He is swinging at just 47 percent of pitches after hacking at 55 percent of them last year. Like Gordon, it does not seem as though he has selectively cut out the right pitches to not swing at. The good news is that he has bumped his contact rate back up to its 86 percent mark from two seasons ago. The problem is that, two years ago, Hechavarria had his worst season at the plate with that swinging configuration.

The changes at the plate have had different translations to their early strikeout and walk numbers. Neither player is walking much; Gordon has just three walks and a 3.4 percent rate, but he also has a 13.6 percent strikeout rate. The added swings are making for more contact and more balls in play, which has helped him avoid both of those "true outcomes." Meanwhile, Hechavarria's changes have not led to any change in his rates, as his walk and strikeout rates are nearly identical to his career numbers.

Why April does (and does not) matter 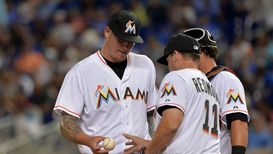 April isn't predictive, but it did happen.

The one difference we have seen thus far is that Hechavarria has had a small power burst early on this season. He already has two home runs to his name, and he is the owner of a reasonable .167 ISO. The four doubles, one triple, and two homers are a nice hot start of extra-base hits, and if some of that early power could stick, then we may be looking at an asset offensively.

It is still too early to declare the power a real change. Hechavarria's swings, when he makes contact, usually look decent, but he has never displayed power in his career, both in the bigs and the minors. He has hit the ball on the ground a little less this year, but he also has more popups to eliminate that advantage. Hechavarria has always boasted decent line drive numbers, but power comes from generating air under the ball. He has done a good job of getting into the gaps early, but without a fewer grounders or more fly balls, it is difficult to find those gaps consistently.

The value of a power-hitting Hechavarria is huge. A slap-hitting shortstop with Hechavarria's plate skills is a major liability on the offensive end. However, a decent-powered Hechavarria with those same plate skills is essentially Nationals shortstop Ian Desmond. Desmond has hit 20 homers and more than 20 doubles in each of the last three years despite a 49 percent career ground ball rate. If Hechavarria can be a poor man's Desmond in terms of power, he may be a valuable player for once.

Neither slap hitter is going to continue their insane early season run. Both players are on unsustainable tears. However, Hechavarria's early power surge is something to keep track of. He may lose all of his hits starting tomorrow, and this past week and change could end up a mirage. However, if there is a glimmer of hope that Hechavarria has found some power, that may vaunt his value into "average-or-better Major Leaguer." As for Gordon, he need only continue to stay aggressive at the plate as long as pitchers continue to attack him in the strike zone. Let's see where his chips fall as we continue this season.