Lately, rumors are swirling that manager Mike Redmond might lose his job. It would be another example of an easy scapegoat for a problem that may not even exist.

Share All sharing options for: Mike Redmond and the easy Marlins scapegoat

The Miami Marlins have not started the 2015 season well, and with owner Jeffrey Loria at the helm, you had to figure rumors would begin regarding the manager. Sure enough, there is some smoke around a story that Marlins manager Mike Redmond may lose his job if the team continues to struggle as much as it has. Never mind that Redmond received a three-year extension before the season began, locking the Fish into his (likely small) salary for the next few years anyway. If the Marlins continue to play poorly, Redmond could be the man who takes the first fall for the team.

This would not be the first time that Loria has blamed a manager for the faults of his club. After an 87-win season in 2009, Loria considered and nearly fired Fredi Gonzalez for failing to make the playoffs. When the club did not open up well in 2010, there were similar rumors swirling about how close Gonzalez was to getting the axe. After that point, it almost felt like it was only a matter of time until he was canned, and indeed within a few months, he was replaced at the position with Edwin Rodriguez.

The mild-mannered Rodriguez did not last long either. The following year, Rodriguez was retained for the 2011 season but immediately came under fire in light of a terrible 2011 campaign for the Fish. Part of the way into the season, the constant rumors were enough to entice Rodriguez to resign for the position.

In 2012, the Marlins thought they got their man in Ozzie Guillen, who signed a big four-year contract to manager the team. The 2012 team subsequently disappointed despite lofty expectations, and Loria threw the entire core out the door, starting with Guillen shortly after the season ended. The Marlins are still paying Guillen now for his final year of the original contract.

The Marlins have gone through four different Opening Day managers in six years. What is the common denominator among all of these instances? Are these all instances of the Marlins finding the "wrong manager" to coach an otherwise fantastic team? That clearly cannot be it, because the Fish did not subsequently retain the 2012 core. They could not all be incompetent managers. One of those guys was successful before he came to Miami, and another guy has since taken over a high-profile job elsewhere and been retained. Guillen proved in Chicago that he was not a terrible manager, and while Gonzalez has made plenty of funny, questionable decisions in Atlanta, the Braves are happy to have him around.

Not worrying about Christian Yelich's slump 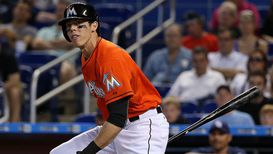 It's too early to worry about Christian Yelich's hitting woes

No, the problem is that the Marlins organization is quick to appoint a scapegoat for failure, and the easiest scapegoats in baseball are managers. They are largely interchangeable at low levels, both due to their smaller effect on on-field play and their smaller salary compared to players. There is a lot that goes into investing then subsequently cutting a player. Letting loose a guy like Jarrod Saltalamacchia would involve eating a lot of salary over the life of his contract, and most teams just do not like swallowing that pill. Eating a manager's salary is far more palatable, and it is easy to find a replacement, as there is a sea of mostly interchangeable names available both internally and in the free market. If you think your guy is not doing the right job, just let him go and get another guy!

But if they are all mostly the same, how can we judge and attribute this early-season failure particularly to Redmond? It takes time to judge a manager because it takes time for a manager to build a relationship with and establish a culture in the clubhouse. Redmond has had time, but even then, there are enough new pieces in Miami that he should be afforded a little more time to tinker. In addition, the Marlins thought two years in that they had seen enough of his work for him to earn three more years with the team. How can 14 games erase all of that sentiment? What is the organization seeing in these 14 games that they never saw in two whole years of work?

Redmond should not be fired 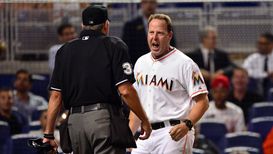 Mike Redmond should not be on the hot seat this early in the year.

If you notice, successful organizations rarely do this kind of thing. The Braves have only made the playoffs three times since 2006, but they have only had two managers during this time frame. The Oakland Athletics have had two managers since they fired Ken Macha in 2006, and they have managed both bad times and a modicum of success since then. The Tampa Bay Rays have managed successful runs since 2006, but they have mixed in a few sub-par, underachieving seasons as well. They never opted to fire Joe Maddon.

Stability does not necessarily guarantee success, but the lack of stability at manager and coaching positions is probably not helping the Marlins on their path to success. It is perfectly possible that Redmond may not ultimately be the right manager to take this team to the playoffs. However, after you make the determination before the year that he may be the guy, and you watch only 14 games in a season, can you really determine that he is not? Or is Miami just prone to putting blame on the easiest target before finding a root cause?

My suggestions is that the Marlins dig around for that root cause first, knowing full well that this early in the season, there may not be a root cause. I implore the team and its fans to not overreact and try to find quick and easy fixes where there may not be any or they may not be needed.