Andrew Heaney had a lot of things work for him last time around, and some things that did not work for him. What should he keep doing, and where can he improve?

Andrew Heaney put up some ugly ERA and FIP numbers in his 20 2/3 innings with the Miami Marlins in June. However, it is easy to point out that his first four starts did not go swimmingly, as he was promptly demoted afterward. But there was more than enough good from Heaney to work with, so Miami should feel encouraged by his performance. When we checked back in on Heaney in the midst of his Triple-A season, he was still dominating hitters who were significantly older than him and looking every bit the part of a Major Leaguer not being challenged.

Now that the Marlins promoted Heaney again, it is expected that he will make a start either on Sunday in place of an injured Henderson Alvarez (who may be out for the year) or replace the struggling Brad Penny in the rotation. Either way, the Marlins will be entrusting games once again to the team's best pitching prospect. What can he take from his first tour and continue in this second tour, and what does he need to improve?

The Marlins have a strong reputation as a team that throws in the strike zone and, to an extent, invites contact. The team's three best pitchers right now all have contact rates around 84 percent with the Fish, which is among the 20 highest rates among pitchers in baseball this season. Only one Marlins starter with at least four starts in 2014 had a contact rate lower than 80 percent. The pitcher with the next lowest rate: Andrew Heaney.

Heaney's relatively low contact rate this year has been mostly as a result of his slider, which Brooks Baseball sees as more of a curve. The pitch has induced whiffs on a whopping 56 percent of swings taken thus far, It has gotten the right amount of swings as well, as Heaney has gotten hitters to offer at it on 48 percent of total pitches. This rate matches up with Jose Fernandez's swing rate on his curveball, and it is close to the swing rate on Nathan Eovaldi's slider.

The types of swings Heaney was getting was also indicative of good things. Generally speaking, you would expect a good pitcher to maximize his swings out of the strike zone, where the average return would be lower, and minimize his in-zone swings. Heaney has done that decently in his four starts this year. Hitters are offering at his outside pitches at a 31 percent rate, third-highest among the guys with at least four starts. His swing rate on balls in the zone still ranks a big highly (third on the team), and that is where he may need work next.

Heaney's most important goal during this promotion is to tighten up his strike zone. Pitching coach Chuck Hernandez probably emphasized the importance of keeping the ball in the strike zone, but Heaney has been relatively wild during his four starts. Take a look at the location of his pitches thus far. 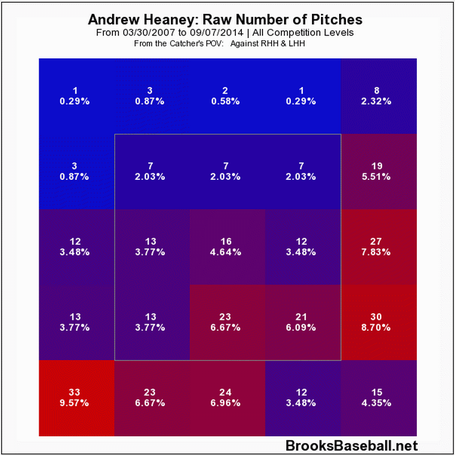 You can compare that to Jarred Cosart, who has struggled with command in the past but has tightened up his work with Miami. 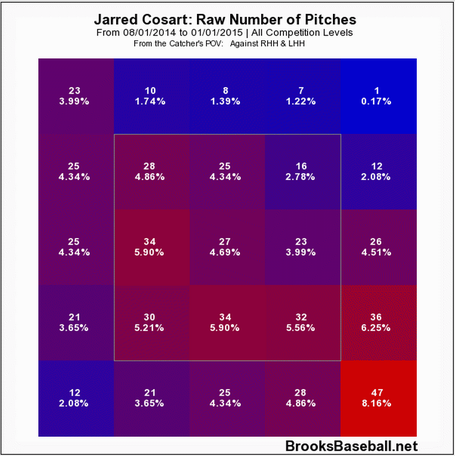 The two pitchers obviously have different repertoires, but you can learn a little bit of Heaney's issues. You can see that he put in an effort to work low in the strike zone, whereas Cosart has been surprisingly more diffuse around the zone. But Heaney's other pitches have all been in the dirt compared to Cosart's more targeted approach. Heaney threw 31 percent of his pitches overall in the area below the strike zone, including the low-and-inside and low-and-outside corners. Cosart's rate of those pitches in his six Marlins starts has been just 23 percent. Meanwhile, Cosart has peppered more of his pitches in the zone, whereas Heaney has failed to hit the corners as often as he should. You can see a particular problem recently in hitting the low inside corner of the zone against righties, as he has buried the slider at their feet far more often than catching the plate.

Heaney has not had the Jacob Turner problem of getting hitters to easily lay off his outside breaking balls, but he has had problems getting them to take his in-zone pitches. When Heaney misses his spots, he has missed either way out of the zone or in the middle or low-middle area where it may be a nice location for hitters. Hitters are taking advantage by making contact on those mis-located pitches and doing damage.

As mentioned in the first section, Heaney's slider did an excellent job. Early hitting results aside, he did a good job of fooling hitters with the offering. Even when hitters were making contact with the pitch, they were primarily getting grounders; the pitch drew a 56 percent ground ball rate in the small sample. The fact that he could not place it in the strike zone (4.1 balls to called strike ratio) is not that disappointing, because sliders are often bottom-out pitches meant to induce whiffs, not called strikes. This could improve as well, but it is slightly more forgivable.

Heaney displayed stronger control of his fastball, but it was hit hard in the early going. He was able to place it to the tune of a 1.6 to one balls to called strike ratio, but it fooled no one. Only seven percent of his fastballs that were swung at got whiffs, which is low for even fastball standards. Those numbers are closer to Henderson Alvarez sinkers rather than Eovaldi or even Cosart fastballs.

Part of that could have been due to some poor velocity. After being billed as a low-90's plus fastball with good movement, Heaney was averaging just 90.6 mph on the pitch in his four starts. While that would be fine for a crafty lefty, it does not fit what was expected of him from his minor league work. The dip in velocity may have affected how well he could get the pitch by hitters.

Heaney could benefit from work out of the rotation, since that would give him an increased number of reps in games. But with Miami still hesitating to start him and seeing him as a relief option for the stretch run, it appears he may not have much time to work on these things in September.