There have been calls for the Miami Marlins to move Nathan Eovaldi to the bullpen on a permanent basis. Those calls would be extremely premature.

Share All sharing options for: The Nathan Eovaldi closer conundrum

The Miami Marlins have recently made it known that they might demote Nathan Eovaldi to the bullpen for the rest of the year in order for him to recover from his recent struggles. However, Eovaldi did make his last start against the Washington Nationals and pitched well, throwing four strikeouts and allowing just two runs in six innings pitched.

Nevertheless, Eovaldi is at 192 2/3 innings pitched, which is 40 innings more than his previous career high, so Miami may opt to shut him down before the final start of the 2014 season. The question that plagues Miami is whether they should continue to play Eovaldi in the rotation in 2015. The team has a few minor league options in Double- and Triple-A who, if pushed, could start in the majors at some point in 2015. Eovaldi is coming off of a confusing season in which his 4.44 ERA appears extremely disappointing. However, his fielding-independent numbers remain strong, casting doubt as to just how poorly he has pitched and how he will play going forward.

In response to some of these questions about his play, the most common suggestion I have heard involves installing Eovaldi as a closer and trading Steve Cishek.

#Marlins Eovaldi could be removed from rotation http://t.co/eILqz0pKsV @fishstripes Trade Cishek, this kids has closer stuff!

Here at Fish Stripes, we are very interested in trading Steve Cishek for value, so this suggestion does not scare us. But installing Eovaldi as a closer is something that does concern us, and the primary argument against that is similar to the one that goes against moving Christian Yelich to first base: it is a waste of value.

It is difficult to argue against the idea that a starting pitcher is more valuable than a reliever. Even closers are not exempt, and you can see the difference in terms of salary. The biggest salaries handed out to starting pitchers in free agency in the last ten years belong to players like C.C. Sabathia ($23 million annually) and Zack Greinke ($24.5 million). The maximum yearly value handed out to relievers has been significantly less, with elite closers like Mariano Rivera ($15 million annually) and Jonathan Papelbon ($12.5 million) earning less money per year and far fewer years. As much as a big deal is made about the value of a top-flight closer, the market does not bear weight for such players.

The monetary value reflects what teams generally believe about a reliever's value versus a starter's. Those values for the two best closers in the game are approximately the free agent value of players like Edwin Jackson ($13 million annually) and CJ Wilson ($15.5 million). At their best, those pitchers may have been four-win starters at one point, but during their contracts, they were probably expected to put up between 2.5 and 3.5 wins a year. That means that an elite closer, two of the best of all time, were paid like above-average starters.

The Marlins have to consider that when they utilize their resources. In Eovaldi, they have a player who, depending on your source, just put up a 1.5 to two-win season in 2013 in a little more than half a year of play. This year, there is definitely a question about how well Eovaldi has pitched (versus how well his defense and sequencing has affected him) and how well he will pitch in the future. Given that his fielding-independent numbers, which are more tied to skill level, looked better this year, the Marlins would be wise to allow Eovaldi more time to experience regression to the mean on things like his BABIP. His improved walk rate and stable strikeout rates should portend good things in the future, not bad. 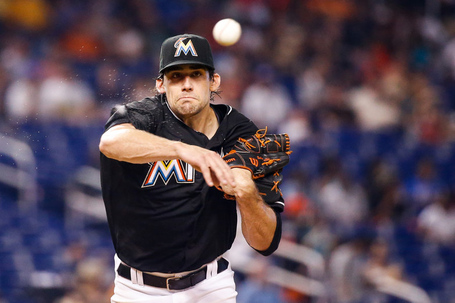 Sending him to the bullpen and making him a closer probably would improve his numbers tremendously. It would likely allow him to go max-effort on his fastball and work mostly with one breaking pitch the majority of the time. His ERA and FIP numbers would fall, and his strikeouts would increase. But so would every pitcher's numbers if they moved from the rotation to the bullpen. The question is not whether or not Eovaldi would be better out of the bullpen, but whether he would be more valuable to the Marlins out of the pen than in the rotation.

Over the last two years, if you look at the average of FanGraphs's and Baseball-Reference's Wins Above Replacement metrics, Eovaldi has averaged two wins per 180 innings. In order to be of similar value to that, you would have to think Eovaldi would turn into a top-ten closer or better in the bullpen. There is no indication that that might happen. And if it does not happen after a move is made, then Eovaldi's value is irrevocably damaged, because he would have been labeled as a starter who failed a move to the bullpen.

At this point, Miami is better off with the devil they know. Eovaldi's skill numbers, despite the lack of above-average secondary offerings, have improved in 2014.The ERA is likely more myth than trend. If Miami gives Eovaldi time, he should develop into a perfectly reasonable mid-rotation starter. A move to the bullpen, on the other hand, is a low-upside play with a good chance to lose value.