The Marlins punted the entire infield in 2014

Punting a position in the majors is a good way to find your team in trouble by midseason. The Miami Marlins chose to punt their entire infield in 2014, and that is part of the reason why they fell shy of playoff contention.

Share All sharing options for: The Marlins punted the entire infield in 2014

The Milwaukee Brewers started their awful slide out of the playoffs sometime near the beginning of September, and last week, Grant Brisbee noted that a big reason why that slide happened was that the team punted on the first base position.

1. It's a bad idea to punt a position before the season

There are so many things that can go wrong in a baseball season -- injuries, players having unlucky seasons, players declining ... -- that it can be crippling to start the season with a positional arrangement that has about a three-percent chance of working out. Reynolds hasn't helped a team since 2009; Overbay hasn't helped a team much since 2010. Even at their very best, when they were young and promising, they were incomplete players with limited ceilings.

The premise here is that the likelihood of the combination of Mark Reynolds and Lyle Overbay working out were so little that the Brewers were asking for problems when they entered the season. Once things started to go downhill, the Brewers could not cover for a position that just was never good to begin with. It was a low-upside play with a decent amount of downside.

The Miami Marlins know plenty about that transaction, because they made a few of those this past offseason. Specifically, the Marlins signed two players to fill infield positions who specifically represented low-upside moves for the franchise. The Fish signed first baseman Garrett Jones to replace Logan Morrison and Rafael Furcal to move to second base despite Furcal having missed all of the previous season to Tommy John surgery. We recognized at the time that both transactions were low-upside moves meant to play stopgap at those positions. The likelihood of either player turning into an average contributor was pretty low given what we knew, and the team's other options in both cases were just as good. Miami could have easily kept Logan Morrison and allowed Derek Dietrich or Donovan Solano to play second base and gotten the same production as Furcal.

How did those moves turn out? Jones has been a replacement-level scrub all year, and he is signed to another season next year at $5 million, which appeared to be dead money at the time of the signing and definitely looks like that now. And Furcal, unsurprisingly, missed essentially all of the 2014 season and is probably on his way to retirement, meaning the Marlins spent $3.5 million for Furcal to recover his hamstrings while the team still played Dietrich and Solano for much of the year.

Combine that with Miami's already questionable decision to allow Adeiny Hechavarria another full season at the plate and the Marlins have three positions with essentially zero production. You can put Hechavarria's defensive play on a spectrum, but it is difficult to argue that he is a whole lot better than a one-win player at this point. As pointed out in the linked article, Hechavarria's best upside is above average, a little below where Marcell Ozuna is, if he does not improve his batting. The chances of Hechavarria being Andrelton Simmons-level on defense may be slim. 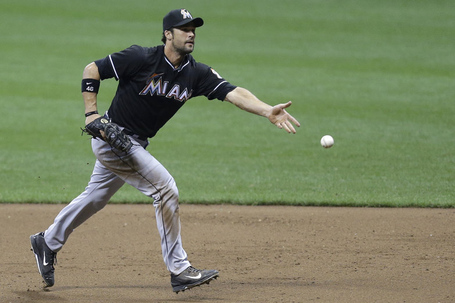 So it is possible Miami is getting something like 1.5 wins out of three positions in 2014. If Miami had average players at even two of those positions, the team could be squeaking out three more wins from the group. That is almost the sort of impact you would expect if Miami still had Jose Fernandez around all season. Can you imagine that?

What can Miami do to avoid punting these positions next year? The most immediate idea is to replace players at first or second base via trade or free agency. It is unlikely that the Marlins have great internal candidates at any of the three spots discussed here, though Dietrich, Justin Bour, and Mark Canha stand out as interesting names worth a try if the incumbents leave. There are already rumors that Garrett Jones may be traded, meaning the Marlins would be in the market for an upgrade. The team supposedly has interest in free agent Pablo Sandoval, which would be an immediate first base upgrade via shifting Casey McGehee across the diamond.

Second base and shortstop also have options if the Marlins opt to go in that direction. Stephen Drew, Jed Lowrie, and J.J. Hardy are among the shortstops that are available, and Miami can always shift Hechavarria if they are so inclined to keep their defensive stalwart in the infield. Dietrich should also be afforded another opportunity, though through 416 career plate appearances over two seasons, he has not exactly impressed (career .220/.297/.397 line, .308 wOBA, 0.3 WAR).

The Marlins have options to replace their tattered 2014 infield. If they are serious about pushing towards contention, they need to make a move to upgrade at least one of these areas in the offseason. There are options, but the monetary investment may be the question.