Jon Heyman of CBS Sports reports that the Miami Marlins do not have a lot of confidence internally that they will be able to retain Giancarlo Stanton with a long-term deal.

The Miami Marlins have made it clear all throughout this season that the Fish are not interested in trading Giancarlo Stanton and that all of their efforts will be placed on finding him a permanent spot on the Marlins' roster for years to come. The fact that neither side had been able to do that in the first three-plus years of their partnership, however, spoke poorly of the Fish's chances, especially with Stanton's looming mammoth price tag. Still, we have heard for some time that Stanton is happier with the Marlins this year and that he is "all-in" on staying in Miami. What are the odds he actually stays?

Here at Fish Stripes, the thought is that it was always unlikely to happen, but it seems internally, the Marlins are also losing confidence in their chances. According to Jon Heyman of CBS Sports, the Fish are not high on their odds of re-signing Stanton this offseason.

The Marlins are said to be intent on making a "legitimate" attempt this winter to lock up superstar outfielder Giancarlo Stanton, according to sources, but word is some within the  organization are still less than optimistic they'll be able to sign Stanton to a long-term deal anytime soon.

In fact, according to friends around the team, Stanton is said to be noticeably happier than he was two winters ago when he was upset that the organization abandoned any short-term playoff hopes by trading its high-priced veteran stars, including Jose Reyes, Mark Buehrle and others. But while his friends say he doesn't even think for a moment about money or an extension, they also point out that his greatest goal is to play for a perennial winner, which doesn't necessarily bode well for the Marlins' chances to keep him and may play into their fears.

Stanton has mentioned multiple times that his emphasis is on playing for a winning baseball team, and the Marlins thus far have been unable to provide that environment. The Fish have gone just 309-391 since Stanton became a full-time Major Leaguer, which represents a winning percentage of just .441. The team has fielded one fire sale club, one disastrous and unlucky 2012 performance, and mediocre seasons in between. Miami has only recently returned to being somewhat relevant this year, and even then, the Fish have not exactly lit the world on fire after a hot start in the first week of the season.

Marlins have to pay extreme salary for Stanton 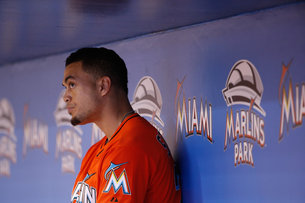 Giancarlo Stanton may be "all-in" on staying in Miami, but are the Marlins prepared to offer him the necessary money for him to stay in south Florida?

Miami wants to extend Stanton and keep him as a part of their core, but the price for keeping Stanton in Miami is going to be exorbitant and more than anything this organization has ever agreed to. The largest contract the Marlins have ever signed is the Jose Reyes deal at seven years and $106 million, and one year after that deal, Miami deemed it expensive and not worth their money. Stanton knows the treatment of free agents in Miami, and he should rightfully wary of signing a long-term deal and trying to commit to the Marlins with their seemingly cyclical rebuilding process and inability to commit money to a winning organization.

At the same time, Stanton has committed more to Miami than we would have expected. He is happier here now than ever before and he lives in downtown Miami and owns a home there.

But team officials are right to be concerned if Stanton's needs are winning first and foremost.

Indeed, the Marlins have surprised folks, perhaps even Stanton himself, by taking a nice step forward, as they've remained on the fringe of the NL race, though folks around the team have serious worries about whether the payroll (they remain 29th in baseball at about $50 million in player payroll), history and more may be too much to overcome in any Stanton talk.

With their perennially bottom-third payroll, it may be a hard case to demonstrate that annual contention is realistic, especially if more improvements aren't in the budget or plans. Jennings did a nice job improving the team on a shoestring last winter (McGehee, for instance, came for $1.1 million following a stint in Japan). But it may take even greater commitments to wipe out the whole history here.

Three true superstar players have come through the Marlins organization since Jeffrey Loria took over ownership of the club in 2002. Only one, Hanley Ramirez, was retained with a long-term contract, and that deal was eventually dealt because it went sour. Miguel Cabrera was dealt in circumstances similar to Stanton's, and Stanton enters his second year of arbitration with a team that is probably a year away from really being a contending ball club. The Marlins would be risking Stanton entering free agency and earning a 10-year contract worth perhaps $270 million or more and seeing if his roots to Miami are really stronger than his desire to play for his hometown Los Angeles Dodgers, for example. Heading into free agency with Stanton is simply a losing proposition.

This upcoming offseason is the last chance for Miami to lock Stanton into a contract. Trying to do it a year before may become even more prohibitively expensive, and at that point Stanton may want a Joey Votto- or Troy Tulowitzki-like lifetime deal. Miami will have to commit nearly $200 million this season to retain Stanton. The folks internally have to be afraid that this season's modest winning may not be enough to scream "winning culture" at Stanton; it explains why the Fish are desperately clinging to their far-fetched playoff hopes while down 6.5 games in the Wild Card with four teams in front of them. They think this futile race to a playoff spot will be how they convince Stanton of their legitimacy.

Time is running out, and the Fish face the inevitable cycle of trading superstars if they cannot sign Stanton. It is fast becoming a lose-lose proposition, and Marlins officials' fears are very much so founded.