In the eve of the Chicago Cubs claiming Jacob Turner on waivers, the Miami Marlins' decision to put the reliever out there and available seems more and more ridiculous.

The ongoing saga of the Jacob Turner designated for assignment situation is getting worse for the Miami Marlins.

Turner was DFA'd earlier this week after another poor start on Sunday, and it did not take long for a team to hold interest in his services. The Chicago Cubs were the second team on the waiver availability, ahead of only the Colorado Rockies, and the Cubs pounced and claimed Turner on waivers. That means the Marlins have 48.5 hours to make a move on Turner or revoke his claim and leave him on the 25-man roster.

MLB.com's Joe Frisaro tried to shed light on why the Turner situation happened now, a week after the trade deadline and with the Marlins struggling to stay in contention for a playoff spot. According to Frisaro, it is indeed all about the playoff spot.

Still with time to make up ground in the standings, the Marlins felt an urgency to make a difficult move.

Even though it may be a long shot, the Marlins still have playoff aspirations. To stay in the race as long as possible, they are looking for those who give them their best chance.

Because Turner is out of options, the club felt the time was now to move in another direction. So Turner was designated, and lefty Brian Flynn was called up from Triple-A New Orleans.

The way the Fish see it, the team needs capable arms to make the playoff race a possibility. Miami still stands 6.5 games behind the division-leading Washington Nationals and six games behind the second Wild Card spot. With their hold on a chance for the playoffs tenuous, the team simply could not afford to keep Turner on the roster in favor of better pitchers.

Except Miami's options were clearly greater than they were painted here. Frisaro makes it sound as though there was nowhere to hide Turner to allow him to develop, except the bullpen is a perfect place for that. Turner had good numbers in the pen despite an ugly ERA, as he struck out 14 batters in 15 2/3 innings out of the pen. That's a minuscule, almost meaningless sample, but it also means Miami saw good peripherals and not enough time to make a full evaluation. Instead of pulling the trigger on a release, why not try and play him there again?

The excuse is that Miami is in the thick of the playoff race and cannot afford poor pitching. But that logic makes no sense for a Turner role as a long reliever or mop-up duty player. Sam Dyson is currently filling that role for the Fish, and he has pitched in a pathetically low number of competitive games. The average Leverage Index (LI) of games he has entered this season is 0.56, meaning that the average situation he enters out of the pen is half as important as a regular plate appearance. Dyson has faced 73 batters this season, and a whopping 40 of them have been in situations where the margin of the game was greater than four runs, meaning the game was mostly in hand. 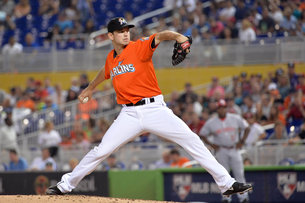 The Miami Marlins designated Jacob Turner for assignment on Tuesday afternoon. Brian Flynn will take his spot on the roster.

Examining the downfall of Jacob Turner 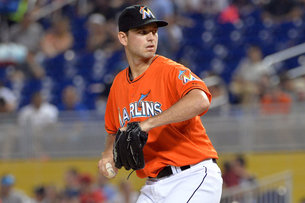 we take a look at what exactly went wrong and what Jacob Turner's future could be in the big leagues.

Those situations have almost no effect on the game state, meaning Miami's wins or (more likely) losses are well in hand in those situations. Dyson has an option this season that has already been used, meaning the Fish can freely demote and promote him as needed. The same can be said for Dan Jennings, who has been shuttled back and forth between Triple-A and the bigs. With Dyson entering games with nothing on the line, why couldn't Miami use Turner in those meaningless situations instead and let him work on bullpen performance until he feels comfortable in the role?

The Marlins' argument for the playoffs is also tenuous at best, as we noted last week. That means Miami will have a hard time climbing back into the playoff race. Why make a roster decision that has potential long-term implications and tosses out an asset (no matter how low the value right now) for the slim chance of the playoffs? FanGraphs calculates Miami's odds for the playoffs after last night's loss at between 2.7 and 5.1 percent. The team discarded a 23-year-old pitcher with a spot to work on his improvement for a chance at making the playoffs 25 to 50 times out of every 1000 iterations of the rest of this season. How is that a reasonable move for a team not loaded with prospect talent or Major League options?

The worst part of Frisaro's attempted explanation is the replacement option for Miami in their quest for the playoffs. It turns out the desired candidate is not Brian Flynn, who was promoted and will make today's start in the series finale versus the Pirates. Instead, the target is 36-year-old former Marlin Brad Penny.

The Marlins have yet to announce who will get the nod that day, but expect it to be Brad Penny.

Of course Penny is not part of the club’s long-term future. But the veteran has pitched in playoff chases before. He’s a former All-Star, and you may recall, he won two games for the Marlins in the 2003 World Series.

Penny may not ultimately be the answer to help the Marlins reach their playoff goal this year, but he will bring a veteran presence to a young staff. Penny also may wind up logging valuable innings down the stretch, which will ease the work load of the rest of the staff.

If this is the case, this is simply a preposterous idea. The Marlins gave out a young pitcher who has not been given much time to work out of the pen to instead provide an opportunity to a 36-year-old pitcher who was last an average player in 2009! The last time Brad Penny pitched a full, decent season in the majors, I was just starting my blogging career. Miami is turning to someone because he is a "veteran" who also happens to be a former Marlin. Three seasons ago, Penny threw 181 awful innings for the Detroit Tigers. Two years ago, the San Francisco Giants tried to use him out of the pen to disastrous results. Miami is expecting this guy to help anchor the back of their rotation for the next month or two for their much-hyped playoff push?

But the Fish are chasing awful playoff odds with pitchers who have been awful for half a decade and tossing out young assets in the process.

This train of thought makes zero sense. If the Marlins were interested in testing out Flynn or Justin Nicolino, or retrying with Andrew Heaney or Anthony DeSclafani, I could see them potentially justifying the roster spot. But the Fish are chasing awful playoff odds with pitchers who have been awful for half a decade and tossing out young assets in the process. This screams desperation and a lack of know-how from an organization that has made questionable moves for the last few years when they sniffed a playoff spot. The Marlins may be trying to improve their team for a run at the playoffs, but letting an asset like Turner go while asking for washed-up veterans like Penny to help your odds is just poor management that cannot be justified.