Christian Yelich may have "fallen" onto the leadoff man role for the Miami Marlins, but he is almost an ideal candidate for the position.

Share All sharing options for: Christian Yelich and the Marlins' ideal leadoff man

Quick, think of the most ideal leadoff man in Miami Marlins history.

Well, the best season by a player who manned the leadoff position primarily in one year was Hanley Ramirez's 2008 season. The player most well-known for being the Marlins' quintessential "leadoff man" is Juan Pierre, probably because he led off for the Fish in 2003 when they won the World Series. And the player who has led off more often than any other Marlin is Luis Castillo, who batted primarily leadoff from 1999 to 2002. I would venture to say that you would point out those three players as the primary candidates, but would have a hard time saying which one of these guys is the most "ideal" player for the leadoff position. Each player, after all, had his benefits at the position.

And Christian Yelich may be here to embody all of those benefits.

Yelich was not slated to be the Marlins' leadoff hitter in 2014, as the team was planning to foolishly send Rafael Furcal out there at the position and bat Yelich second. This is not necessarily bad; Yelich is one of the Marlins' three best hitters, and the second spot should house one of the three best hitters on your team. But to claim that Furcal would be a better leadoff man than Yelich is heresy, and Yelich is proving that right now with his play this season, according to Clark Spencer of the Miami Herald.

Yelich began the day Tuesday with the highest on-base percentage of any regular leadoff hitter in the majors, a .376 mark that ranked him a hair better than the Cardinals’ Matt Carpenter (.375).

Yelich had three hits — just missing a home run with one of them — in the Marlins’ 7-1 win on Monday. That was his fourth three-hit game in a seven-game span. The last Marlin to do that, according to the Elias Sports Bureau, was Hanley Ramirez in 2009.

This latest hot streak in the second half is capping off a quietly stellar season for Yelich (thought he is garnering some attention as well), particularly in the leadoff spot. While Yelich was always the best hitter on his team in the minors, he was relegated to the leadoff position, but it is not as though that is a bad thing. It turns out that, if you want to optimize your lineup, you should have one of the team's three best hitters at the top of the lineup. Intuitively, this makes all the sense in the world; give one of your best hitters the most plate appearances on the season, and good things will happen.

So what are the qualities needed from a good leadoff man? Let's see if Yelich meets them all.

There is no argument here. No one would doubt that, heading into this year, Yelich was one of the Marlins' three best hitters. He hit .288/.370/.396 (.341 wOBA) in 273 plate appearances last season, and it was fairly easy to project at least a .330 wOBA from him before this year. Even with some regression in things like his inflated BABIP, he figured to have the discipline to at least get on base for this otherwise mediocre Marlins hitting team.

It turns out that if the Yelich of last season continued to hit well on balls in play and find gaps, then he added a little extra power, then he would actually be an even better hitter. Yelich took last season's blueprints and added some pop, leading to an obviously better season and a permanent spot near the top of the lineup.

The traditional role of the leadoff man is to "get on base," but usually that was superceded by the need for "speed." It turns out that you can't steal first base, and that is what leadoff men need to do the most. The walk is more valuable to a leadoff hitter than to any batter in any other lineup spot, and the reasoning is simple. With the bases empty, a walk and a single are worth the exact same number of runs. While every position in the lineup can run into a bases-empty situation, the leadoff man is guaranteed to get one to start off the game.

Yelich has displayed fantastic plate discipline this season, which is right in line with what he did last season. Only five qualified Major Leaguers this season have swung at fewer pitches outside the strike zone than Yelich. At the top of the list are some of the better leadoff men in the game; Matt Carpenter leads all Major Leaguers in fewest out-of-zone swings, and Brett Gardner sits third and has led off for the Yankees 99 times this season. Ben Zobrist has taken the leadoff spot 22 times this year and he sits just behind Yelich in this category, as does Coco Crisp.

Yelich's 21.1 percent rate of swings out of the zone displays his fantastic patience and discerning eye at the plate. Take a look at his swing rate in different areas of the strike zone. 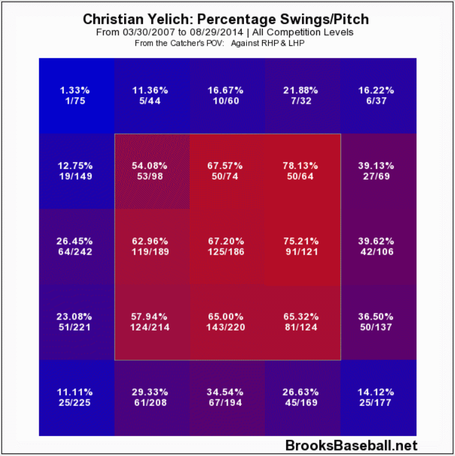 Compare that to the free-swinging Marcell Ozuna, who has swung at 33 percent of out-of-zone pitches. 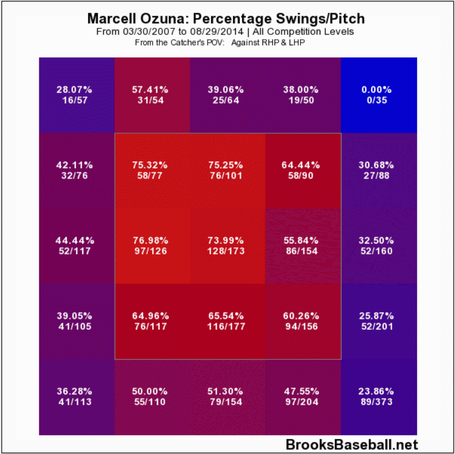 Yelich, like Ozuna, takes the majority of his swings in the zone. But while Ozuna still takes a fair number of hacks out of the strike zone, particularly on low pitches, Yelich completely abandons those pitches. The blue areas in Yelich's zone surround the strike zone, with only his inside pitches being tempting enough to get swings from him. All of that patience has led to his strong 11.2 percent walk rate.

Yelich has not been a great basestealer this season, but he has displayed fantastic baserunning skills again this year. He has advanced  himself and taken an extra base in 50 percent of would-be opportunities, which is comparable to the league's better baserunners. His stolen base rate is not fantastic like last season, but 16 of 21 bases stolen is still above the league average and beneficial to the Marlins.

It turns out Yelich's game is actually fine-tuned for the leadoff spot. As the years pass, he should grow into a better hitter with more power, and that may push him down in the order for Miami (which may be unnecessary). But while Yelich is still a skinny kid with excellent on-base skills, he belongs at the top of the lineup.