Looking at Jarred Cosart's domination of the strike zone

Despite being in the early stages of his Marlins career, Jarred Cosart has already made a huge impact on the team's rotation by his ability to dominate the strike-zone.

Share All sharing options for: Looking at Jarred Cosart's domination of the strike zone

Following the heartbreaking, season-ending injury to Jose Fernandez, it appeared that Miami's playoff hopes quickly vanished. While the team was still in the thick of the NL East playoff hunt, the sudden departure of Fernandez left the Marlins with a massive hole inside the front of their rotation. Despite Henderson Alvarez and Nathan Eovaldi continuing to hold down the fort, there still remained an emptiness inside of Miami's core.

That large gap seemed to be slightly filled as Miami acquired Jarred Cosart and Kike Hernandez in an extremely bold and risky move with the Houston Astros. With the acquisition of Cosart, the Marlins added another young, team-controlled starting pitcher that should be a huge factor in the rotation for the foreseeable future. However, nobody anticipated how quickly that impact would have been made.

For the majority of starting pitchers that make that transition from the American to National League, the level of production tends to trend upwards. While we're still in the initial stages of Cosart's conversion to the NL, it seems that he's fitting right in with that trend.

As Michael Jong mentioned in a piece following Cosart's second Marlins start, it appeared that the newly acquired pitcher was extremely focused on consistently working the ball inside the strike zone. While that definitely was apparent from his first few starts with the Marlins, that trend has definitely been elevated as he's continued to become more comfortable in his current role.

In his last three starts, Cosart has been nearly perfect by his ability to work the strike zone and actually force the batter to make contact with the pitch. This strategy has definitely allowed the opponent to make contact on a regular basis, which has actually been a solid approach for Cosart. 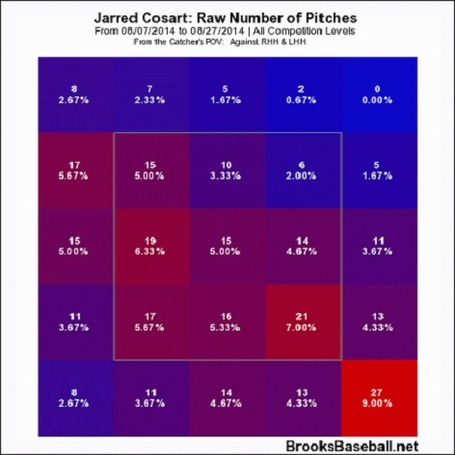 While the opposition has been able to get on base against Cosart, the right-handed starter has been able to prevent any trouble, by maintaining control of the strike zone. As apparent from the above graph, Cosart is extremely solid when it comes to working alongside the corner of the strike-zone. Even though his repertoire and all-around approach prevents him from being a strikeout machine, Cosart is able to be so effective because how he's able to use that array of pitches while keeping the ball inside the strikezone.

A prime example of that ability was showcased during Monday's outing against the Angels, where Cosart was able to throw 80 strikes in 107 pitches, which put him alongside Kevin Brown and Josh Beckett as the only Marlins starters to reach that accomplishment.

Despite Cosart being in the early stages of his Marlins career, it appears that he should remain as a solid part of the team's starting rotation. While his role will probably be diminished when Fernandez is able to make his way back to the starting rotation, Cosart definitely brings a young, reliable arm that you can put in the midst of the rotation. Even with his strange approach to pitching, Cosart has been able to appear to be a consistent right-handed arm.