If the Miami Marlins want to help Giancarlo Stanton earn an MVP, then the team needs to get to winning, because the odds get a lot worse without a playoff appearance.

Share All sharing options for: Giancarlo Stanton's MVP chances are tied to the Marlins' playoff odds

In the last few weeks or so, a number of injuries have come up that have derailed players in the National League MVP race and left it open for a certain Giancarlo Stanton to jump in. After the Andrew McCutchen rib injury (likely due to that heinous beanball encouraged by Kirk Gibson of the Arizona Diamondbacks), it is unlikely Cutch can return quickly enough to beat his competitors, even as his Pittsburgh Pirates are at the top of Wild Card leaderboard. Troy Tulowitzki is out for the year with an injury and was playing on a bad team, so his chances have essentially been reduced to zero. Ditto for Paul Goldschmidt and his own season-ending injury and bad team.

The race has been reduced to three names, the same three names we discussed last week and yesterday. The race is essentially one between Stanton, Los Angeles Dodgers starting pitcher Clayton Kershaw, and Dodgers outfielder Yasiel Puig, with Kershaw currently holding the lead according to the sportsbooks.

It should not surprise you to see Kershaw leading the way. Even though he missed a month of playing time with an injury, he is having a transcendent year that is head and tails above anything the other pitchers in the National League are doing. Furthermore, he happens to be playing for a sure-fire playoff contender in the Dodgers. While a lot of change has occurred in baseball award voting that has progressed our way of thinking, a few basic tenets remain.

- Offense always trumps defensive contributions, unless they come from a shortstop or a catcher

- Winners are almost always from a playoff team

The playoff team caveat seems to be almost be a hard and fast rule. Due to the presence of the nebulous word "value" on the MVP award, a lot of the BBWAA voters believe that a team that does not make the playoffs does not deserve a player who has ultimate 'value," because without that player, the team would still be out of the playoffs.

History supports this pattern of voting. Take a look at the MVP voting since the 1993 season.

Since the Marlins were instituted (minus the 1994 strike season), six players were voted for MVP honors whose teams did not make the playoffs. That means that 85 percent of MVP winners are on contending teams. There were plenty of examples of players who were "snubbed" of a selection in part because they were not on a playoff team. Mike Trout lost the last two years in part because the Los Angeles Angels could not do what the Detroit Tigers were doing in the weaker AL Central. Ryan Braun beat out a seemingly more deserving Matt Kemp in 2011.

In order to judge how Stanton's chances would be if the Marlins, as expected, eventually fall out of the playoff race, it would be necessary to see what type of seasons the six winners posted. Three of the six seasons were Barry Bonds campaigns in which the San Francisco Giants fell just shy of the playoffs. One of those seasons was in 1993, when he led the league in homers and RBIs and hit 93 percent better than the league average, wrapping up his second straight MVP award. Two of those seasons were the Giant Bonds Head years where he was no longer a mortal and turned into some pitcher-gobbling monster, including when he broke the single-season home run record. 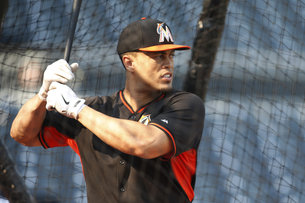 If the Marlins do trade Stanton, MLB.com's Joe Frisaro was told prospects are not what the team would be looking for.

The other three seasons were more normal, but were still transcendent in their own right. Rodriguez's 2003 campaign was probably the only non-Bonds, non-Albert Pujols season that could compare to those two; as a Gold Glove winning shortstop who led the league in home runs, it was almost impossible not to vote for him at the time. In 2008, Pujols's batting line was leagues ahead of the next National League competitor, and while there were significant competitors at the seven-win level right below Pujols's eight-to-nine-win range, most of them did not play enough (Chipper Jones), play the right position (Chase Utley), or play for a winning team (Carlos Beltran, Hanley Ramirez). Larry Walker was chasing a .400 batting average about 50 percent of the season, which led to him winning his award narrowly over equally strong competitors like Mike Piazza, Craig Biggio, and Bonds.

Of the six player seasons that involved a non-playoff team, Pujols's 2008 seems most like Stanton's season this year. He has very few strong position player contenders who are also on winning teams, with only Puig standing close to him. But unlike Pujols that year, he is not having an amazing campaign that will stand the test of time; Stanton is projected to finish with about six wins on the season, and his current batting line of .292/.395/.563 is great, but only 61 percent better than league average. By comparison, Pujols's was 84 percent better, and Walker's was 77 percent better.

With no great position players, the voters may turn to a fantastic year for a pitcher like Kershaw, whose ERA is currently under 2.00. Eliciting the thought of Bob Gibson is probably enough to get voters excited, especially when you have the playoff contender edge as well over your competitor.

Stanton may have one final edge in his back pocket; he could end up leading the National League in home runs and RBIs. Stanton will not put up a crooked number or anything, but in a depressed run environment like in 2014, he may be one of two players to actually reach 40 home runs. If he does that and ends the year with nearly 110 RBIs, he should take home both crowns. Ryan Howard has made a living competing for MVP awards based solely on those measures.

But Howard only won one, and he did so on his most deserving season. This will probably end as Stanton's best year of his career so far, but if the Miami Marlins cannot push into contention, he faces a very steep climb to winning the MVP award.