Marlins rumors: Miami Marlins may have $75 million payroll next season

The Miami Marlins may boast a hefty increase in payroll next season in the team's efforts to surround Giancarlo Stanton with a contending ballclub. What can Miami do with that kind of money?

Share All sharing options for: Marlins rumors: Miami Marlins may have $75 million payroll next season

The Miami Marlins are interested in building around Giancarlo Stanton even if he will not sign a long-term deal this offseason,  so the Fish are naturally going to have to increase payroll. After what happened in 2012, it would not be difficult for Marlins fans to doubt the value of the Marlins' word in increasing payroll. Remember, the rumors heading into the offseason after the 2012 campaign were that the Fish were retaining Stanton and Jose Reyes as roster stalwarts and bumping payroll from $67 million  to $80 million for 2013. Of course, we all remember what happened after that.

So excuse our skepticism when Joe Frisaro of MLB.com reports in yesterday's fairly information-laden post that the Marlins' payroll may climb up to $75 million next season.

The Marlins are clearly looking to move forward, not move Stanton. Not now. And barring a complete change of thinking, not in the offseason.

In fact, looking forward, the hope is to see the payroll increase to around $75 million in 2015, which would make room for Stanton’s salary, and others.

This is certainly different than what I expected from the Marlins this season, but to be honest, it is not entirely surprising. Jeffrey Loria and the front office may have gone through cyclical changes in their time at the top of the organization, but they have also proven that they would be willing in assisting a winning ballclub and boosting the Marlins' chances if they appear to be contenders.

Except in 2009, when the Marlins traded away Josh Willingham and Scott Olsen in the offseason, then fell just shy of the Wild Card.

And in 2010, when instead of paying into the team to assist in the infield, the club stood pat with their current roster and fell well short of the playoffs again.

So the track record is not exactly stellar, indeed.

Still, Miami is two games back of .500 and not playing like an impressive team, even though they are contending for the second Wild Card at the moment. Are the Marlins really that close to contention, and what can an increase in salary up to $75 million actually get the Fish? 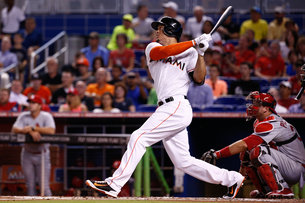 Should the Marlins go a different direction, the Red Sox are interested in trading for Stanton.

It is important to note that some of that salary increase is going to pay for arbitration raises for a number of players. The Marlins already have $14.1 million committed to three players (Jarrod Saltalamacchia, Garrett Jones, and Jeff Baker) next season (this assumes Miami does not pick up Jeff Mathis's $1.5 million team option). The team has seven players who are going to arbitration, most notably Giancarlo Stanton heading into his second arbitration season and Nathan Eovaldi and Henderson Alvarez going into their first years.

We can make a rough estimate of those players' salaries and see how that bumps the payroll.

A $75 million mark would be a hefty step up from where Miami is currently projected. A $25 million increase in payroll would be sufficient in bringing in two mid-tier free agents. Of course, there is a question as to whether free agents of a caliber like James Shields, whom the Marlins are considering, will come to Miami after how Reyes and Mark Buehrle were treated after 2012. But money speaks volumes, and if Jeffrey Loria is indeed willing to offer it, I think the Fish could make out with two solid additions.

The Marlins have pressing needs for infield help at second base, shortstop, and realistically first base as well, but it seems their focus (once again) is on pitching. But the club could still acquire a starter like Shields or Jon Lester on five-year contracts worth $70 million or $90 million respectively and possibly have enough money to offer an infielder like Stephen Drew, J.J. Hardy, Jed Lowrie, or Chase Headley a fair-market deal.

Of course, this is all dependent on whether Miami actually chooses to increase payroll, which is something we will have to wait until the offseason to find out about. They did so this past season, so there is a little precedent. Ultimately, the top priority remains signing Stanton to a long-term contract, so the rest of the speculation may have to wait.