Jarred Cosart is finding the strike zone more often, which has led to his modest success through two starts with the Miami Marlins.

Last night, Jarred Cosart made his second start with the Miami Marlins, and it was a highly successful one. He struck out three batters, walked one, and got 52 percent of his 20 balls in play to go for grounders. Beyond that, he shut out the St. Louis Cardinals through seven innings and helped the Marlins pick up a 3-0 win that left them just 3.5 games back of the Cardinals in the Wild Card race.

In two starts, there has been very little difference between the Cosart of old and the new Marlins one. Cosart continues to have trouble missing bats, which is a product of his only having a curveball as a primary breaking pitch. He is still getting copious ground balls, which is a product of his use of a high-velocity cutter or two-seamer that seems effective at getting worm-burners. Cosart came in with these qualities, but he also came in with a penchant for walking batters; he walked 10.1 percent of batters with the Houston Astros this year and 11.1 percent of them for his career.

In two starts with Miami, he has only walked three batters in 12 1/3 innings pitched, which represents a 6.4 percent rate. And the biggest reason for that has been his ability to locate in the strike zone. So far in Miami, he has thrown 57.1 percent of his pitches in the zone, which is a higher rate than any Miami starter this year. In keeping with a longstanding tradition in Miami to pound the strike zone, Cosart has been able to locate and do a better job avoiding walks as a result.

As an example, let's take a look at just how Cosart has been able to control the zone. Here is the plot of his pitches from his start versus the Marlins a week before being traded to the Fish. 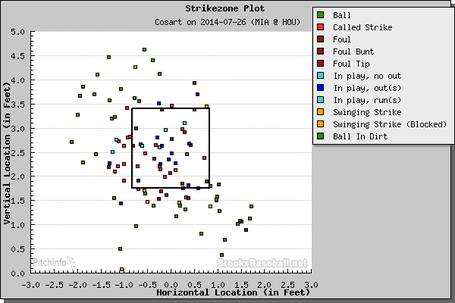 Pitches look all over the place, and his location was not particularly strong within the strike zone either, as he littered the zone low and high. Let's compare that to his zone from last night's game against the Cardinals. 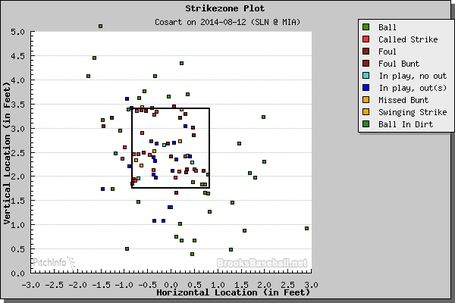 Still not exactly an organized piece of work, but you can see how much more effective a zone like this could be. It looks as though Cosart tightened up the inside of the plate against righties so that not so many pitches flew wildly inside or up. More pitches painted the corner high and tight. The preponderance of pitches in the middle and lower parts of the zone are also encouraging.

It does not necessarily compare to a Henderson Alvarez zone, but it is a start. 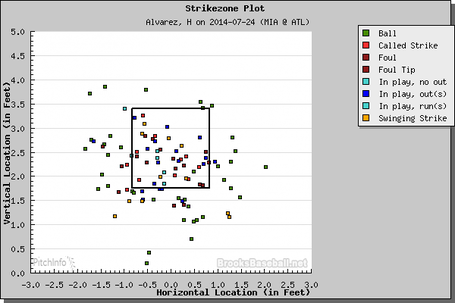 You can see where Cosart could use improvement. Alvarez exhibits significantly better command on his pitches. This is evident by the fact that fewer pitches are seen way wide of the zone or very high out of the zone. Compare Cosart's start from last night to this and you can see that Alvarez's area of work is significantly tightened up and closer to the edges of the traditional strike zone. He rarely misses high in the zone, and indeed he rarely works there; the majority of those pitches are located middle or low in the strike zone, where they have the best chance of yielding grounders.

Nathan Eovaldi shows the same semblance of command and control. 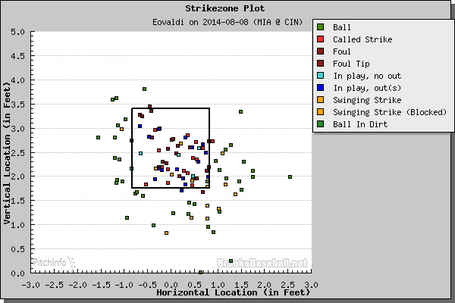 Again, there is very little up in the zone, where Eovaldi can be beat. He works middle or low in the zone and his entire area of work is tight. If Cosart wants to continue his impressive work, he should begin modeling his pitches after these guys.

We can look at the overall picture of Cosart's pitching thus far in his two starts versus his career before this. Before arriving in Miami, his overall zone looked like this: 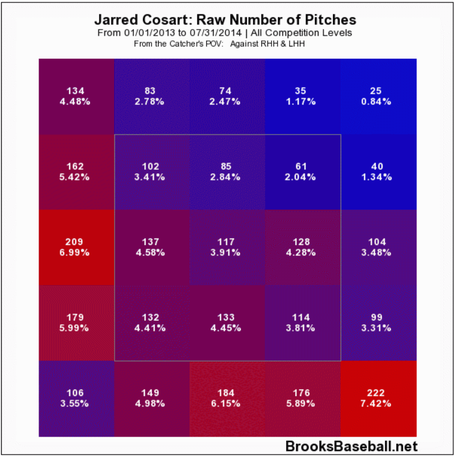 And this is his zone since then, in two starts with Miami. 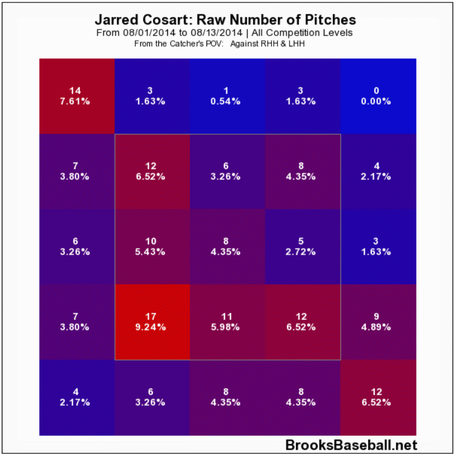 Obviously, it is only two starts, but you can see improvement. Rather than going low and in on righties but out of the zone, he has gotten more pitches in the lower inside corner so far. He has also generally avoided throwing too far inside early on. The low and outside pitches are acceptable to try and bait swing and misses, but they have not been exorbitant either thus far. Overall, he's working more in the lower half of the zone and less up at the top as well.

Overall, Cosart's ability to hit the strike zone has looked good over two starts. It is impossible to say whether that is a result of a concerted effort by him, coaching from pitching coach Chuck Hernandez (who just recently did a good job with Eovaldi and his velocity), or just a two-start run of good luck. Either way, Miami wants this to continue, because it will be the ticket for Cosart's improvement going forward. He will never rack up strikeouts for this team, so Miami's best hope is that he can continue getting grounders and avoiding walks. The ground ball rate has held steady and looks as real can be, but the command of his pitches and his ability to hit the corners of the zone will be the next frontier for the 24-year-old righty.