The Chicago Cubs are building a future juggernaut behind position player prospects and pitching lottery tickets, including former Marlins starter Jacob Turner. The Fish are building their team in the opposite fashion. Is that hurting them?

Share All sharing options for: The Chicago Cubs and Miami Marlins are building teams in opposite fashions

Yesterday, well-respected former Baseball Prospectus writer Rany Jazayerli wrote an extremely interesting article on Grantland about the Chicago Cubs and their unorthodox and sensible approach to team-building. Essentially, after hearing for years and years that pitching wins championships in baseball, Theo Epstein and Jed Hoyer have gone the other way and built a position player cadre that is the envy of all of baseball.

Rather than accept this attrition as the cost of doing business, the Cubs are trying a different way, which involves two simple principles:

1. Investing a preponderance of their draft-and-development resources on hitting.

2. Taking advantage of the unpredictability of pitchers by cheaply acquiring established major league pitchers with upside.

The Cubs have Kris Bryant, Javier Baez, Jorge Soler, Albert Almora, and Arismendy Alcantra all closing in on being big-league ready within the next year or year and a half. They just picked up consensus top-30 prospect Addison Russell from the Oakland Athletics in the Jeff Samardzija / Jason Hammel trade. The focus on position players has been a concerted effort, as the team drafted position player again in 2014 as well. And all of those top prospect name are looking mighty good now, with Baez and Alcantra already playing and Bryant almost certainly to follow next year.

That group of players, combined with incumbents Starlin Castro and Anthony Rizzo, make for a stellar cast of hitters. But the Cubs have had to shop the bargain basement for pitchers, trying to find buy-low candidates to rehab and mend. This way, the Cubs can avoid the danger of developing and investing in a pitching prospect, only to see them fail.

But the sport’s pitching obsession has one fatal flaw: Pitchers aren’t reliable. Young pitchers get hurt, and fail todevelop, and lose the strike zone overnight. Trying to build around young pitching is like trying to hold water in your hands: It’s impossible to keep some of it from leaking out over time. The more resources a team invests in it, the more resources the team will squander. It’s a fundamental law of the sport.

The Cubs have done this quite a few times since Epstein and Hoyer took over the front office, and the latest example of that was when the Miami Marlins traded Jacob Turner to the Cubs for two minor league relievers of no consequence. Turner was posting the best season FIP of his career at 4.00, with the highest strikeout rate and the lowest walk rate of any season as well. True, he worked eight strong (but hit-marred) games out of the bullpen to get those results, but the results still pointed to some promise. But because of the Marlins' ridiculous reasoning, the team dealt the 23-year-old pitcher for nothing instead of betting on his upside. 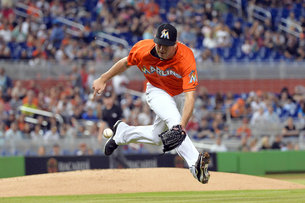 The Cubs traded nothing for Jacob Turner, and the Marlins' reasoning for the move was ridiculous.

If you are a part of the group of Marlins fans that, despite Turner's obvious shortcomings thus far in his career, were disappointed that Miami essentially released him for no return, you might be interested to see how the Fish compare to the Cubs in their approach. While Chicago focused its drafts and acquisitions on position players, who are better guarantees for success than pitchers, Miami doubled down on pitching over and over again. The team is well known for its love of high-upside hard-throwers in the draft, and it found the top name of that type of player in Tyler Kolek in 2014. Since the reign of Larry Beinfest, the Marlins' draft profile has skewed towards high school pitchers, as the team has selected prep pitchers in eight of their 17 first-round picks including this season.

But it is not just in the draft. Miami opts for more pitching at any opportunity. Despite the fact that the Fish have a seemingly ready-made Major League replacement for 2014 in Andrew Heaney, the Fish made starting pitching their top priority at the trade deadline. And they filled that quota with Jarred Cosart, who pitched well last night in the team's 3-0 win. But for Cosart, a 24-year-old starter under team control through 2019, the Marlins paid a huge cost, trading their preseason second- and third-ranked prospects. including their 2013 first-round pick.

The Marlins just paid through the nose for a young, team-controlled pitcher who offers tools, upside, but not a lot of guaranteed performance.

The Cubs paid nothing for almost the same pitcher. Take a look at this table.

Those are those three pitchers' performances since 2012 (Cosart began pitching in the majors in 2013). Turner has been the worst of the three, but not by a whole lot. And if you look at xFIP, which corrects their home run rates using their batted ball data rather than their raw home run totals, they are essentially the same. The Marlins, who so highly value pitching performance, paid the Astros two respected prospects for the best of the three. The Cubs, who bargain-shopped and looked for guys underrated by ERA, just stole the guy only one rung down the ladder at best for nothing.

Miami is willing to throw resource after resource on young pitchers who may or may not pan out. They invest their money and trade bait on guys who have just a shred of Major League competency.

You can see how the two sides value pitching. Miami is willing to throw resource after resource on young pitchers who may or may not pan out. They invest their money and trade bait on guys who have just a shred of Major League competency. They toss first-round picks at long-term projects, hoping to hit the next Josh Beckett again. None of the first-round pitchers Miami drafted since Beinfest was general manager accumulated more than five Wins Above Replacement with Miami. Only two of the seven pitched more than 100 innings with the team; only one, Chris Volstad, threw more than 200 innings. Two of the high schoolers never made the majors for Miami.

All of those draft resources, bonus money, and trade fodder were tossed out in search of stabilization at a position that is hard to stabilize. Meanwhile, the Cubs have hit on a few diamonds in the rough by findings guys who were underperforming their strikeout and walk rates, and they just nabbed another pitcher who has at least a snowball's chance of developing into another Jake Arrieta success story. Jazayerli points this out:

Four months ago, the Marlins could have gotten a huge haul of talent for Turner, yet they cut him even though he was pitching better than ever. Turner’s FIP this year is the best of his career. His average fastball velocity (92.6 mph) is the highest of his career. Releasing him defies explanation. If you were to put together a list of the pitchers most likely to be the Arrieta of 2015, Turner might rank at the very top. I’m sure the Marlins had their reasons for getting rid of him, but then I’m sure they had their reasons for getting rid of Millar 11 years ago.

Miami saw a pitcher who wasn't cutting it for their stretch run and who couldn't be demoted, even though there were ways to circumvent that problem. The Cubs saw a buy-low project with all upside and little downside at the cost of acquisition. The unfortunate thing is that that type of player, a buy-low pitcher under heavy team control who could develop into an asset, is exactly whom a talent-starved and money-tight organization like the Fish should be acquiring! Teams with no money should be shooting for the moon and hoping for upside and recovery!

The Marlins have established a team-building concept focused around acquiring pitching talent first and foremost. They believe the team is built around a "pitching and defense" principle that supposedly got them the 2003 World Series. But the Cubs have found the different and perhaps more efficient approach. In a world where pitching talent is such a crapshoot, why not invest more in sure-fire hitting bets and roll the dice on pitching? The Marlins put in a lot of assets on pitching and have not yet succeeded. The Cubs spent the last three years investing on position players and rolling those dice, and their pitching staff is better than Miami's in 2014.