A Boston Herald report revealed Monday afternoon that Giancarlo Stanton is atop the Boston Red Sox's wish list. The Marlins are expected to begin extension talks with Stanton this offseason.

Giancarlo Stanton doesn't want to discuss his future with the Marlins until the end of the season. And the Boston Red Sox will be waiting for a decision.

Boston has been linked to Miami's right fielder in the past, and The Boston Herald reported on Monday the Red Sox have the depth necessary to get a deal done if Stanton does not want to remain with the Marlins.

Stanton should dwarf that haul, bringing a gold mine in low-cost talent, and no team is better positioned to make a run than the Red Sox.

Their minor league system, despite the struggles of Xander Bogaerts and Jackie Bradley Jr., remains robust. The Red Sox are blessed with eight blue-chip starting pitching prospects — as many as any club in the game — that could form the foundation of a deal. And they boast an inventory of big league talent that could interest the Marlins, as well.

Stanton leads the league with 31 home runs and 79 RBIs, and has been healthy for the course of the 2014 campaign. He has drawn interest from several teams around the league, and the Marlins are not entirely sure of their slugger's future.

Jon Heyman of CBS Sports reported last week that the Marlins are not confident they can successfully extend Stanton, and are internally planning for all possibilities.

Stanton has been linked to his home town Dodgers, but also expressed interest in remaining with the Marlins as long as the team continues to improve. Miami has remained in the Wild Card conversation to this point in the season, and did not make any trades prior to the non-waiver trade deadline that would send a negative message to Stanton.

Should the Marlins sense Stanton does not have a desire to work things out, a trade will likely be inevitable.

While Boston does have a significant amount of pitching depth and the Marlins are known to always be looking to add an arm, Miami has a significant amount of arms in its minor league system. A young rotation features (an eventually healthy) Jose Fernandez, Nathan Eovaldi, Henderson Alvarez, Jarred Cosart, and Tom Koehler, and Miami has prospects such as Adam Conley, Andrew Heaney, and Justin Nicolino who could be ready for major league action moving forward. 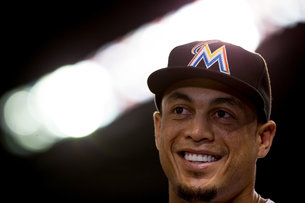 Miami Marlins slugger Giancarlo Stanton has yet to reach 40 home runs in a single season, but thanks to a recent hot streak of long balls, he is back on track for that mark in 2014.

In a deal with any team, including the Red Sox, the Marlins could seek middle infield depth as well as corner infield prospects. Garrett Jones and Casey McGehee are both veterans, and the Marlins traded prospect Colin Moran to Houston last month.

The Herald also noted Yoenis Cespedes could be included in a deal for Stanton, although adding the outfielder the organization once sought may not be strategic considering he is eligible to become a free agent after the 2015 season.

Cespedes could be piece of a deal for Stanton, joined by any number of youngsters, from Gold Glove-caliber center fielder Bradley to minor-league hit machine Mookie Betts, to Blake Swihart, who might be the best catching prospect in the game. Even if the Red Sox insisted on keeping Bogaerts — and he’s maybe the only untouchable player in their system — they have the pieces to make an overwhelming offer.

General Manager Dan Jennings and Miami's front office have made it clear they do not want to trade Stanton, who will likely demand a contract in the $200 million range. While Stanton may not be moved, if talks do not progress, the Red Sox likely have the pieces to get a deal done.