A quiet and interesting development occurred in last week's four-game series against the Cincinnati Reds. Nathan Eovaldi started in the Miami Marlins' only victory in the series, a 2-1 10th-inning walk-off win. In the start, Eovaldi went seven innings, struck out six batters while walking two, and gave up only the one run and two hits. It was likely his best start since early June and probably one of his best starts all season long. And according to the story going around, it may have all been due to one man: pitching coach Chuck Hernandez.

What allowed him to get back to throwing like the Eovaldi from earlier this season -- the pitcher who struck out 69 batters and recorded 10 quality starts across his first 13 outings -- was his control of his offspeed pitches. Between starts, Eovaldi worked with pitching coach Chuck Hernandez on extending his stride, which he said kept him in line.

"I felt [my offspeed pitches] were a lot more consistent tonight, being sharp," Eovaldi said. "I was able to work ahead in counts and threw all my offspeed pitches over the plate for strikes and good swing-miss pitches."

He said he hadn't felt this good in a start since he threw seven innings of four-hit, one-run ball against the D-backs on July 9. The difference between that Arizona start and the one on Saturday was his command of the fastball, which allowed him to strike out six batters, the most he's recorded since he fanned eight Cubs on June 6.

That was a successful outing complete with a strikeout rate we had not seen since June. And the whiffs were apparent; Eovaldi got nine swings and misses on his slider and two from his curveball, and he tallied 16 total in 97 pitches. That is a 16.5 percent swinging strike rate which far outstrips his season mark of around eight percent.

Of course, in one game's worth of sample, you would be concerned that it was simply a good night by Eovaldi and an easy ex post facto explanation by the coaching staff. But Eovaldi made another start against the Reds again this past weekend, and again the velocity was apparent. After averaging a staggering 98.9 mph against the Reds that first game, he came off of Friday's start averaging only 97.9 mph this time around. Not surprisingly, he finished the night with six strikeouts in eight innings as the Marlins got the win.

Swings and misses are often the most difficult thing for Eovaldi to master, because his slider is average and he has no strong third pitch to which to turn to get strikeouts on lefties. But one thing was impossible to miss in that game was Eovaldi's velocity. The fastball has been his weapon for years, and Fish Stripes has spilled a lot of online ink regarding Eovaldi's increasing fastball velocity. But these last two games take the cake; Eovaldi averaged 98.4 mph according to Brooks Baseball and touched 100 a few times in each start. This was the fastest his pitches had been all season long, and it had to have played a major role in his success elsewhere.

The 1.5 mph bump in average fastball velocity would entail typically a 0.4-run difference per nine innings. It certainly helped Eovaldi on his way to a dominant performance. And the correlation (not necessarily causation) of the increase in velocity and the change in effectiveness is hard to avoid. But two questions arise:

1) Did we really see a change in his stride?

2) Has this changed the effectiveness of the fastball?

The stride change is actually pretty easy to see in comparing older starts from this year with some of his latest work. Take a look at this pitch from earlier this year in Arizona.

It is difficult to see the feet in location, but compare that stride's timing to this one from the Friday start against the Reds.

Interestingly, in these two clips, it looks like Eovaldi is hunching down and kicking the leg out further. But to me, it also seems like his leg comes down earlier, thereby both lengthening the stride towards the mound and making his pace a little shorter.

Here's another shot, this time from earlier in the year in Marlins Park, which has the center camera view.

Contrast that to this one from last week's Reds game.

The post-pitch leg swing is a bit wonky, but I also find that Eovaldi is hunkering down more on the latter pitches against the Reds in an attempt to stretch out the stride off of the pitch. He does look a little further towards the plate at the end of the latter one here, but it is a minuscule difference on the television broadcast.

The hunkering down and getting lower does seem supported a bit from the release point data as well. 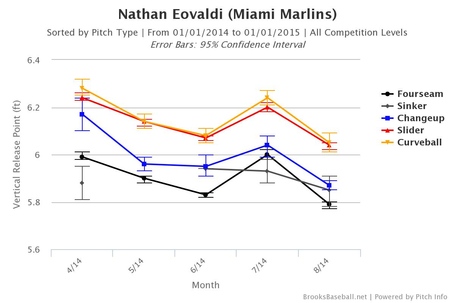 Nevertheless, the numbers are there. Ironically, however, they are not with his fastball. There is a clearly evident bump in his velocity, but the pitch is only registering three percent more whiffs than it was getting before the change. Furthermore, the fastball whiff rate is at a number equal to his the mark he's posted since last season. Instead, it was the effectiveness of the slider that seems to have garnered all of the swings and misses. More than half of Eovaldi's sliders that have gotten swings have come up empty, compared to 28.7 percent before August. This year's whiff rate on sliders was barely any different than last season's, but it took this new switch in extended stride to unlock that mystery.

If Eovaldi has unleashed the slider as a devastating new wipeout tool, all the better for the Marlins. But the uptick in velocity likely has a lot to do with that as well. The slider has quietly gained two miles per hour as well, which probably helps in getting hitters to miss. The effectiveness of the fastball may be helping set up the slider better. Whatever the key has been, Eovaldi has once again recovered must-watch status for Marlins fans. We have to see what he has figured out in August and see if he can retain it going forward.