Skip to main content
MAKE YOUR FISH PICKS Updated props are up for Marlins vs. Braves series

Miami Marlins color commentator Tommy Hutton was mad when presented with a question by Fish Stripes regarding NL All-Star team manager Mike Matheny picking Matt Carpenter over Casey McGehee. Was he right to be angry?

Last night, it was email/Twitter Tuesday on the Miami Marlins broadcast, and Rich Waltz and Tommy Hutton fielded questions from the crowd. One question was from our very own Scott Gelman, representing our crew at Fish Stripes. He asked Tommy on his thoughts regarding St. Louis Cardinals and National League All-Star team manager Mike Matheny picking his own guy, Matt Carpenter, to the All-Star Game at third base over Casey McGehee. In response, Tommy got frustrated and nearly entered his typical rant mode, and the broadcast showed the following graphic. 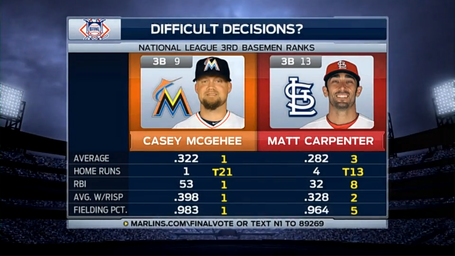 I understand Tommy's frustration. Casey McGehee is having a nice season, and he indeed got some recognition by being placed in the Final Vote ballot, in which you can vote for McGehee up until 4 PM EST this Thursday. But at least in terms of traditional statistics, Carpenter does not look like a great selection, and much like the case of Giancarlo Stanton, it almost feels like being in Miami is leaving McGehee underappreciated.

But before you get on your horse about McGehee versus Carpenter too, you should note that the broadcast showed a bunch of numbers that primarily favored McGehee. It cherry-picked its stats, and we here at Fish Stripes won't stand for it! So let's show some numbers and compare the two players.

When you look at their entire slash line, you can see that the race is essentially dead even. McGehee has the edge in batting average, but Carpenter is putting up slightly better power stats and walking enough to put up a similar OBP. After park adjustment, FanGraphs has Carpenter slightly better, but you can toss that advantage essentially out the window. This competition is about as even-steven as it gets. Carpenter has a one-run edge on baserunning as well, if that tells you anything.

This highlights the differences between the more individual statistics like the slash line and wOBA tell you over the more team-based stats like RBIs. RBIs are often valued, but the only way to really rack them up is to bat in the middle of the order. McGehee and Carpenter are having almost identical offensive seasons, but #HitsMcGehee has 53 RBIs to his name versus Carpenter's 32. The only reason for that is that McGehee bats behind Giancarlo Stanton and Christian Yelich among others, as he hits cleanup for Miami. Carpenter bats behind the pitcher as a leadoff man, so baserunners are not available to him.

On the other hand, runs tell the story of what Carpenter's numbers can do at the top of the order. He bats in front of the Matt Holliday - Matt Adams - Allen Craig triumvirate, and that crew has done a good job driving him in. He has scored 52 runs versus McGehee's 35. That shows you that a high-hit, high-OBP, low-power player can deliver in either situation, but the traditional stats would be different. At the top of the lineup, the focus for McGehee would have been to score in front of Stanton, Garrett Jones, and Marcell Ozuna and company.

So offensively, they are even. How about on defense?

You can argue with the magnitude difference in runs. The idea here is that all three statistics point to McGehee being worse on defense than Carpenter. And if McGehee is worse defensively, and the two are even offensively, than it follows that Carpenter earned an All-Star spot over McGehee at least.

But, as Tommy would point out, McGehee leads all third baseman in fielding percentage, even after he committed two errors last night against the Arizona Diamondbacks. That's good, right? That makes you the best third baseman in the game on defense!

Not really. By UZR, McGehee has been worth three runs above average in avoiding errors. The problem is that he is not even reaching baseballs that other third baseman can make plays on. Consider these numbers provided by BIS:

These numbers are not set in stone, of course. These are based on video scouts determining what plays are considered the responsibility of a third baseman, and the eyes can always deceive. But they illustrate the point that the defensive stats are saying. McGehee saw 152 plays that were considered a third baseman's responsibility (note: this does not mean that those plays should have all been outs, but rather that they passed through the third baseman's area of fielding). He only converted 67 percent of those plays into outs, with 25 more outs gotten on out-of-zone plays. Carpenter, on the other hand, converted 72 percent of plays in his zone and got 32 more outs out of his zone.

The difference? If we equalized their opportunities, that difference would be seven plays in the zone and seven out of zone plays, for a total of 14 plays. That would be worth something on the order of 10 runs, or one win on defense. That may not be the entire magnitude, but it shows just how different the lead-footed McGehee probably is versus the more agile Carpenter.

Of course, how could Tommy know that? He cannot judge that with his own eyes because he doesn't watch Carpenter often enough. Matheny does, but then he can't judge McGehee. All they can go by are these numbers, but fielding percentage does not tell anything close to the whole story defensively.

Overall, the selection of Carpenter was a fair one, especially after Todd Frazier already made the team. McGehee still has a chance, but the gripe of selecting the former over the latter is not necessarily justified. Their offense is actually equal, and the difference is in the defense that you cannot easily see.