Nathan Eovaldi and his free-falling strikeouts

Since the beginning of the season, Nathan Eovaldi's strikeout rate has dropped dramatically. What has been the cause of this, and is it hurting his stock?

Share All sharing options for: Nathan Eovaldi and his free-falling strikeouts

In April, the Miami Marlins were riding relatively high, and a good reason for that was the success of their starting rotation. Jose Fernandez was healthy and blowing hitters away, Henderson Alvarez was finding his stride, and Nathan Eovaldi was still leading the National League in fastball velocity. But he had added to that the ability to get strikeouts at a surprising rate. By the end of April, he had whiffed 35 batters in 38 1/3 innings, a strikeout rate of 23 percent.

Flash forward to now, and we see Eovaldi's numbers are a little worse than they were back then. His 3.52 ERA and 3.24 FIP are both solidly above average, and he is on his way to potentially a three-win season. But the strikeouts that seemed so enticing earlier in the year have fallen by the wayside. Since April, Eovaldi has struck out only 41 men in 61 1/3 innings, a rate of 15.5 percent. Consequently, his ERA has ballooned to 4.11 in that time with a concurrent 3.92 FIP. Most of that was a bad month of May, as his June numbers thus far (3.86 ERA, 3.00 FIP) have been decent.

But the magic touch that made that first month so good seems to have disappeared. Eovaldi's strikeout rate has fallen tremendously, and it is pertinent to Marlins fans to find out the reason behind it.

Back when we first discussed Eovaldi's burgeoning strikeout numbers, we figured that the reason behind them appeared to be the increase in pitches inside the strike zone. Indeed, Eovaldi has placed his fastball in the zone quiet well, as it boasts a 1.4 balls to called strike ratio this season. That number has gotten worse over the past two months compared to his initial 1.2 ratio from April, but this aspect of his game remains the same; Eovaldi has depended on placing his fastball with good control in the zone in order to avoid walks, and he has done that well this season.

That decrease should dent the amount of strikes Eovaldi generates, but can that be the only factor? No, in fact, those factors have been minimal in the regression of Eovaldi's strikeouts. The biggest problem has been the drop in swinging strikes. In April, according to Brooks Baseball, Eovaldi got whiffs in 11 percent of his pitches, the expected rate of a player with a good strikeout total. Since then, that rate has dropped to 8.4 percent, the expected rate of a pitcher struggling with strikeouts.

It turns out the explanation behind Eovaldi's strikeout problem is as simple as a lack of swing-and-miss stuff. But you cannot blame his slider for the downfall. Eovaldi's slider has actually increased in whiffs per swing, from 28 to 30 percent. The slider is doing its job, especially against lefties, against whom its whiff rate has actually increased. But the problem lies in the fastball instead. After getting an 18.8 percent whiff rate on the pitch in April, the rate has fallen back below where it was all of last year, down to 12 percent in the last two months.

What is the reason for that? One could point out that the pitch has decreased in velocity, down one mph from the first month of the season according to Brooks Baseball's pitch classifications. However, the raw Pitch F/X data disagrees with this assumption. From FanGraphs: 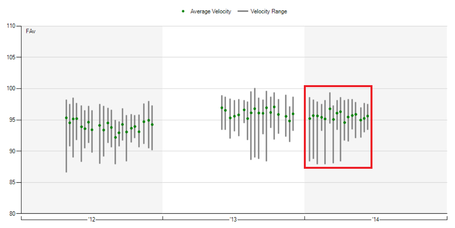 The chart does not indicate any drop in fastball velocity according to the raw Pitch F/X data. He has hovered just over 95 mph all throughout the season according to that chart.

For his career, Eovaldi's rate of swings and misses on the fastball is at 17 percent per swing, so you would expect that to head back up. A lot of this could be due to the bad month he had in May, and we could be trying to nitpick small amounts of playing time and coming up with general trends. But the other areas where Eovaldi has been generating strikes have regressed as well, and expecting him to bounce all the way back to a 23 percent strikeout rate at this point may be asking for too much. If Eovaldi is a control artist like Bartolo Colon who throws hard, he has a more limited ceiling than Marlins fans would like.

But it only takes one breakthrough to push him to the next level. With his newfound control, Eovaldi has already made one career-defining change. At 24 years old, he is still young enough to find a second one.