Casey McGehee has been a great addition to the Marlins in 2014, but the talk of providing Giancarlo Stanton "protection" in the traditional sense is still not real.

The Miami Marlins made what turned out to be an excellent move before the 2014 season in signing third baseman Casey McGehee to a $1.1 million contract. McGehee has contributed very well so far this season, even if the Fish should expect those numbers to fall going forward.

On an unrelated note, Giancarlo Stanton is having a bounce-back campaign that has led Miami to being one of the best offenses in the National League. Stanton has had a resurgent season, is hitting home runs at a breakneck pace, and finally has healthy legs underneath him in the outfield. He should be heading for an All-Star campaign.

The Marlins think these two things are related, however. They believe that McGehee has provided Stanton "protection" that has helped him succeed.

"[Adding McGehee] has had a huge impact," Redmond said. "We've talked about it a lot, about needing a guy to hit behind Stanton and give him some protection, or as much protection as he can possibly get. And he's done a great job."

Added Jennings: "Compared to last year and the record we had and where we were, what he's meant to this ballclub has been absolutely invaluable."

Lineup protection has often been refuted, especially right here at Fish Stripes, The whole discussion has been gone through time and again. Lineup protection, as it is traditionally defined, is the ability to get better hitters behind your top players in order to allow them to see more pitches and, presumably, hit better. But this has proven incorrect by Tom Tango and others in The BOOK: Playing the Percentages in Baseball. Within The Book, the research shows that players do not hit any better with better players behind them than they do with worse players. The only problem is that they get fewer opportunities to hit when players like Placido Polanco are batting behind them. The individual opportunities, however, are still just as effective.

How has that been so far in 2014? Well, last year, Stanton saw 41.1 percent of pitches inside the strike zone according to Pitch F/X. This season, Stanton is seeing 41.2 percent of pitches in the zone, meaning pitchers have been just as wary of him in 2014 as they were last year, when the Marlins ran a cavalcade of mediocre players behind him. This season, they are being careful and willing to pitch to Casey McGehee, and so far, McGehee's made them pay. There is a reason why he has 44 RBIs with only one home run, and it has something to do with his absurd .390/.459/.451 batting line with runners in scoring position.

So Stanton has not gotten more pitches to hit, but McGehee has done a better job behind him. What does that indicate for the Marlins and why they might be scoring more runs? It simply shows that McGehee's 2014 performance is a better one than the third basemen and players who hit behind Stanton put up last season. The reason why Miami is scoring more runs, once again, is because they have better hitters on their team, not because Stanton is necessarily receiving better pitches to hit. The team is taking advantage of the times opposing pitchers put Stanton aboard for free; instead of stranding him at first often, the team is finally driving him home.

The Marlins are still claiming that Stanton's success is in part because of McGehee despite all evidence to the contrary. Two things may actually lend to that possibility. One is that, while Stanton is seeing a similar amount of pitches out of the strike zone, the distribution of those pitches has differed a bit. Here are the pitch distributions from 2013. 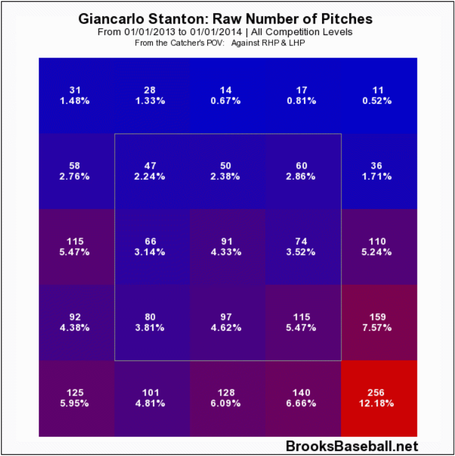 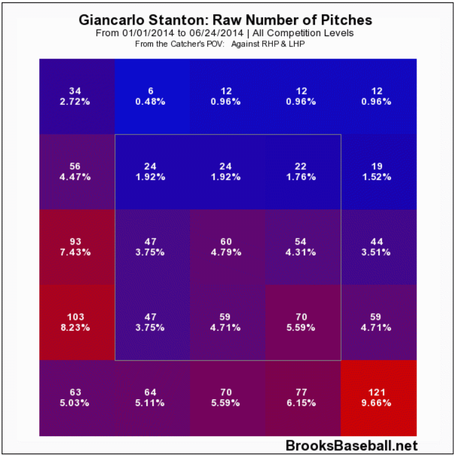 You can see that pitchers are throwing more pitches inside this season than they were last year, when he had less protection. Stanton is seeing a high number of pitches deep inside, where they either end up as balls or he swings right through them. The location is such that that area cannot be efficiently turned into hits all that often. He is swinging at more of those inside pitches and whiffing at the same rate as he was on those swings last season, meaning those pitches have been effective in getting strikes.

The only other thing that gives credence to the idea that McGehee is helping Stanton's production is the mental or psychological aspect of the game. Here's Stanton on the subject:

Said Stanton: "It all goes back to the same thing, that you have to wait for your pitch. There are still going to be times even with people behind you that they're not going to pitch to you. So I don't really like that excuse that much. But it's a lot more comfortable having somebody behind you.

"His presence there every day, each at-bat is a solid approach. So you know you're going to get a solid at-bat. He's not going to chase too many pitches. He's going to be a tough out every time. To have that behind me every single day is definitely a plus in helping us anchor the lineup."

It says that he feels comfortable, but you will notice that most of that quote discusses how Stanton's approach remains the same and that McGehee's approach is a good one. Nowhere does it say that Stanton is receiving better pitches to hit and getting more hits because of McGehee, because the proof is not necessarily there. The only thing that has eased Stanton's mind is that McGehee can deliver and also is an effective hitter, meaning that the Marlins' offense may actually score runs if Stanton gets on base.

If that is enough "protection" for Stanton, then so be it. McGehee has been excellent, but he is not providing "protection" in the well-known sense of the word. And that is acceptable; McGehee only needs to keep hitting the way he has, and Miami will score more runs on the back of having better players than 2013. That is good enough.