An honest evaluation of Jacob Turner

Jacob Turner suffered through another rough start last night, and his time in the starting rotation may be limited. But is this season a fair assessment, and what can he bring to the table? A SWOT analysis can elucidate more.

Share All sharing options for: An honest evaluation of Jacob Turner

Former top prospect Jacob Turner has been really struggling over the last two years. The Miami Marlins picked him up when his name was still near the top of the prospect charts, but since his successful 2012 debut, the former Detroit Tigers farmhand has been nothing but trouble. From 2013 to now, he has had one ugly stint in Triple-A followed by 29 mediocre starts. In the 28 starts prior to last night's game, he has thrown 162 innings of 4.33 ERA and 4.48 FIP ball, with a disappointing strikeout rate of 14.4 percent and a walk rate north of nine percent.

It is not difficult to see that he has struggled since last year, and now he faces a tough challenge going forward. Andrew Heaney will likely make his debut next week, and there is still a question as to whom he will replace in the rotation. One of those names on the potential chopping block is Turner, meaning he has to keep his performance up or risk demotion to the bullpen.

But in a time when it is easy to throw blame at a struggling Turner, it may be best to offer an honest evaluation of his skillset. After all, he is still the Marlins' asset, and as a pre-arbitration player, he still holds value; Turner has only one year of service time prior to this season and is only eligible for arbitration in 2016. As cheap a resource as he is, could Miami get more out of him in 2014? What follows is a Strengths, Weaknesses, Opportunities, and Threats (SWOT) analysis of the struggling Marlins starter.

Ground ball rate: Unlike previous seasons, Turner appears to be getting a hold of at least one successful trend: increasing his ground ball rate. It is up to 52.4 percent this season, which is an upgrade over his career marks closer to 45 percent before the season began. This is important because Turner has had issues with home runs in the past, and this is one way he can limit the long ball and thus better take control of his peripheral numbers. All of this should help to limit hard-hit balls, extra-base hits, and homers.

Stuff: In terms of pure stuff, and in particular in terms of movement, you can see that Turner still has appeal. His two-seam fastball, which he is using on 40 percent of his total pitches, has tremendous sink and run in towards right-handed hitters. The pitch may be the most eye-popping thing Turner can show off of his arsenal. He has a solid curve offering that has good dip as well, evidenced by this pitch, courtesy of PitcherGIFs.

The other pitches Turner flashes are less spectacular offerings, but the raw material is there to form a good pitcher. A good sinker with hard arm-side run and at least one solid breaking pitch that one can throw to either side is a good enough start, especially since his slider and four-seam fastball have enough in them to be average offerings with some projection.

Command: The problem is that Turner cannot convert these pitches into average or plus offerings since he has no idea where they are going. A lack of command over the pitches he throws has led to him missing far too often in either dangerous locations or places no hitter would swing.

If you will recall a few years ago, I took screenshots of catcher setups for Heath Bell versus the actual location of pitches. Here is a fairly innocuous Turner example that led to a double by Shin-Soo Choo. 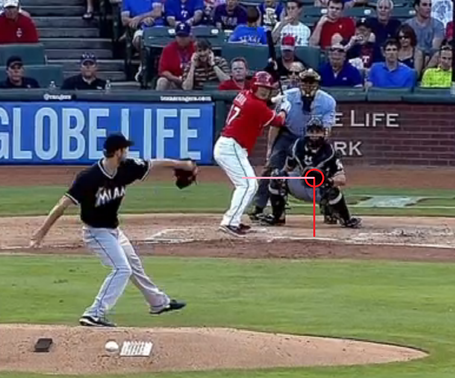 That is the location where catcher J.T. Realmuto is asking for the pitch. Even with the three-quarters view, you can see that the ball is supposed to be low and away.

Here is where Turner throws it. 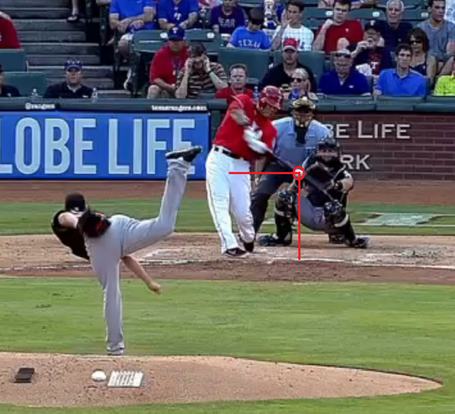 Even with the odd angle, you can see that Realmuto had to adjust his glove up and in, and Choo turned on the pitch that closer to the upper middle part of the zone. Of course, that's just one mistake pitch, but a careful review of Turner's work will show that he cannot spot in the zone in effective locations, nor can he spot pitches close but outside the zone, where they have the most profit. This is due to a lack of command, or the ability to throw to a spot as needed.

Control: This has affected his control as well. Turner likely has better breaking pitches than Henderson Alvarez, but his inability to spot pitches in the right location has led to him traveling too far out of the strike zone. Take a look at the distribution of his pitches since 2013. 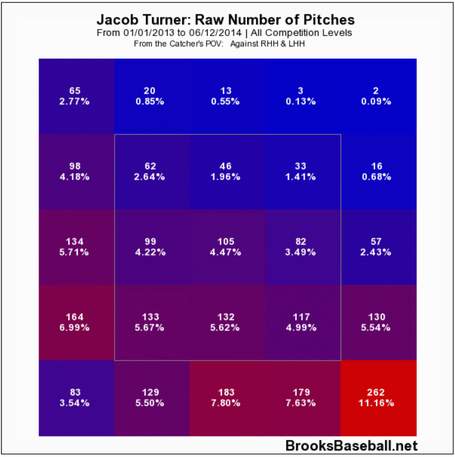 Compare that distribution to that of someone like Henderson Alvarez since the same time period. 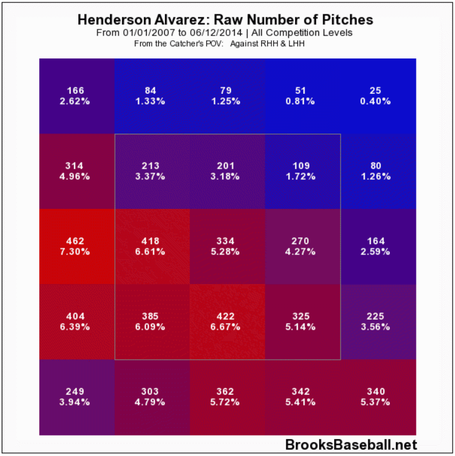 You can see how often Alvarez works inside to right-handers and low in the strike zone. Relative to that, you can see how difficult it has been for Turner to remain in the zone, as his entire strike zone area is purple or darker in shade, indicating fewer pitches. Alvarez has pounded the zone to the tune of the 10th-highest zone rate in baseball in pitchers with at least 150 innings. In contrast, Turner has the 16th lowest mark of those 135 pitchers.

Bullpen: The Marlins may threaten to demote Turner to the bullpen if he continues to struggle, but this may be a hidden opportunity for him to shine. It is possible Turner could use one or two innings of all-out pitching to get hitters out with his decent stuff, and perhaps a more zoned-in focus on a certain group of hitters can help him hit the strike zone more often. Being a starter is not easy in Major League Baseball, and there is no shame in being shifted to the bullpen and having success there. Former Marlins pitcher and fellow Tigers prospect alum Andrew Miller has found a career as a lefty out of the pen, and Turner could find himself there as well if given the opportunity.

Coaching Staff: It is uncertain whether the coaching staff or the individual players acquired have a knack for attacking the zone, but the Marlins' pitchers all seem to do just that except for Turner. If it is a focus of pitching coach Chuck Hernandez, then that sort of mentality and approach can be coached into Turner. It may be better received if it is a more organizational philosophy rather than being based on the success of any individual starter. If Miami pushes this focus on Turner, he may be able to improve on it in time.

Competition: The Marlins are still in a contending spot right now and need all the help they can get in order to succeed in 2014. That help may come from a relatively deep pitching prospect crop, and that group may threaten to demote Turner. He is not at risk of losing a roster spot and being demoted because he is out of options, but demoting him to the bullpen would be considered a threat to his current position.

Roster Crunch: Continued poor performance may also threaten Turner's stay in Miami. After all, he has no other safe roster options in Miami, meaning the Fish need to get as much mileage from him as possible. They have no other locations to stash him, meaning his time with the Fish could be limited if his struggles continue.

What can Turner do then to recover from this, after we made our analysis? Asking for help from the coaching staff about a more disciplined, strike-zone based approach would be a good start. It has marginal talents like Tom Koehler playable while improving the stock of Alvarez and Nathan Eovaldi. If Turner can follow that approach, it would be a good start.

The alternative is to relish the opportunity to work in another role in 2014. If Miami wants to replace him in the rotation, Turner should view a bullpen move as an opportunity to refocus his career and game rather than a demotion to a lesser role. It may only take some success there to translate eventually in winning starting pitching.