Last night, Jacob Turner had a solid, acceptable start for the Miami Marlins versus the San Diego Padres. Where did he find success, and where could he use improvement?

Last night, Jacob Turner took the first step to returning to form in his second start since missing time with the shoulder injury he suffered early in April. Turner struck out four batters in six innings and walked just one en route to a one-run outing that kept the Marlins in the game. The Fish eventually won 3-1 on a Giancarlo Stanton home run, but not before Turner showed a little progress during this latest outing.

Turner appeared early in the game to struggle with his location. From a subjective view of the game, it appeared he was burying a lot of his breaking pitches and sinkers in the dirt and failing to locate low in the strike zone. If the game plan was to get Turner to attack the strike zone more often, the early portion of the program did not appear to be executing that plan well.

But overall, certain pitches for Turner worked fairly well. His two-seam fastball, as codified by Brooks Baseball, seemed to be at its best during the game. He only threw the pitch 26 times all night, but only three went for balls while he threw eight for called strikes. The location of those pitches was primarily low, and against a steady stream of left-handers, Turner was able to notch more than a few pitches in the lower outer half outside of the traditional strike zone, where umpires often call strikes in the lefty shifted zone. In keeping those pitches low, Turner was able to earn good results on swings, and there were a lot of them. The fastball got swings on 58 percent of those pitches and hit the ground a staggering 87 percent of the time in play.

The breaking pitches were more of a mixed bag. He threw the slider 10 times and the curveball seven times. While the curve recovered decently, the slider fell out of the zone often, with eight balls and only two swings against.

The whiff portion of the program for Turner was a net loss, as batters missed on only 12.5 percent of their swings. The most effective whiff pitch was the four-seamer, but it only got two swings and misses the entire time. In terms of fooling batters, it was a thoroughly disappointing effort by Turner even with the four strikeouts.

Part of the blame can again be sent to his secondary offerings. Turner could not locate the slider or the changeup against left-handed hitters, and the fact that they ended up so far out of the zone led to hitters not paying attention to the pitch at all. 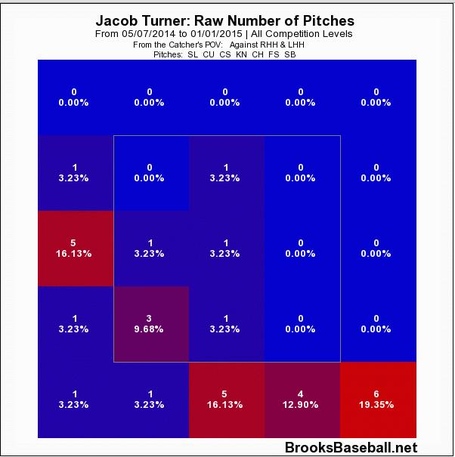 Too many of those pitches ended up buried low to the ground or belt high and way outside to left handers, and hitters laid off often enough to neutralize the potential for swings and misses, This issue with command remains Turner's biggest obstacle for strikeouts; if he cannot come close to nibbling the zone, hitters will not bite.

Turner hit the ground hard with his pitches, but so did opposing hitters. The Padres buried 12 of 17 batted balls on the ground, thus upping Turner's season ground ball rate even higher than his current career best. The biggest culprit was the two-seam fastball, which helped to mitigate some of the batted ball damage of Turner's low-whiff repertoire. This should remain a key to success for Turner, as his command of the sinker appears to be acceptable compared to the rest of his pitches.

Turner only went to the fastball offerings 61 percent of the time in last night's game, but the breaking pitches and offspeed stuff were clearly ineffective for much of the night. Knowing this, it may be worth continuing to emphasize use of the four- and two-seamers in greater percentages over his other pitches, as he has a harder time commanding those offerings. Those may be more ways to coax effectiveness, even at a lower strikeout rate, from a pitcher who has had trouble in the past. For now, Turner showed some improvement, but his secondary offerings still appear to have a ways to go before being good pitches.