A recent interview with Marlins bench coach Rob Leary revealed that the pitching coaches on the staff are emphasizing contact and pounding the strike zone from starters like Henderson Alvarez and Nathan Eovaldi.

The Miami Marlins have gotten excellent success from their starting pitcher so far this year, as four of them are posting ERAs less than 4.00 and two have ERAs and FIPs less than 3.00. Jose Fernandez's success comes as no surprise to anyone who watched him throw 172 brilliant innings last year, but the sudden jump by Nathan Eovaldi to ace-level numbers in the first month of the year is quite a shock. We already know that the reason behind Eovaldi's early strikeout binge (35 in 38 1/3 innings, 23 percent rate) is due to consistent pounding of the strike zone. As FanGraphs's David Laurila finds out in his latest Sunday notes interviews piece, this is by design from the Marlins' coaching staff.

"He’s getting a lot of [ground balls] on his fastball," said Leary. "We’re not asking him to strike anyone out. We’re not asking any of our pitchers to strike anyone out. The more efficient they are, the longer they can go. We saw that with Henderson Alvarez recently when he threw a 90-pitch complete game. We want our pitchers to get outs with quality pitches, and the sooner the better. Balls down in the zone get put into play, typically on the ground."

We already noted that the Marlins have been the among the most strike-pounding teams in baseball in the last few years, but this seems to be the first indication that the franchise has actually asked their pitchers to do this. It seems Miami is coaching for their pitchers to pitch to contact and get "efficient" outs by working the lower half of the strike zone.

Marlins fans know the risks of this strategy. The first thing is that this sacrifices the strikeout as a weapon for all but the pitchers with the most dominant stuff. Consistently working in the zone leads to more hittable pitches, and only guys with elite breaking pitches tend to get good strikeout rates from this approach. The top 20 pitchers with the highest percentages of pitches in the strike zone since 2013 included some of the lowest strikeout rates in the league, including those of Bartolo Colon (15.7 percent) and Bronson Arroyo (14.5 percent). It also, however, included some of the higher rates in the game, including Fernandez's (29.1 percent) and Cliff Lee (24.8 percent) among the top 10. This shows that it still is not impossible to coax strikeouts even with this idea in mind.

"I don’t throw a two-seam," explained Eovaldi. "I throw a four-seam and grip the ball the same every time. I’m just trying to throw good-quality low strikes and a lot more of my pitches have been down by the knees this year. I don’t really pay much attention to the movement I might be getting. I just throw to where the glove is."

Is he accomplishing this task? Here was Eovaldi's heat map, courtesy of Brooks Baseball, of all pitches thrown in the 2013 season. 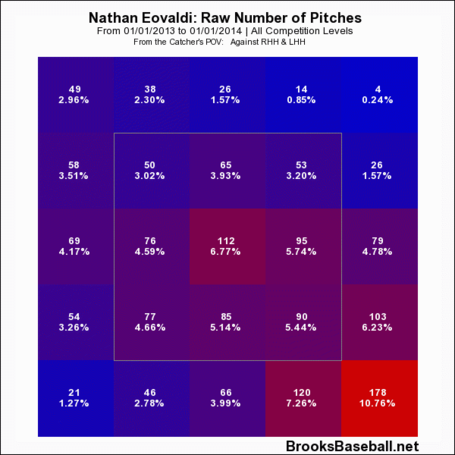 Compare that to his 2014 performance thus far. 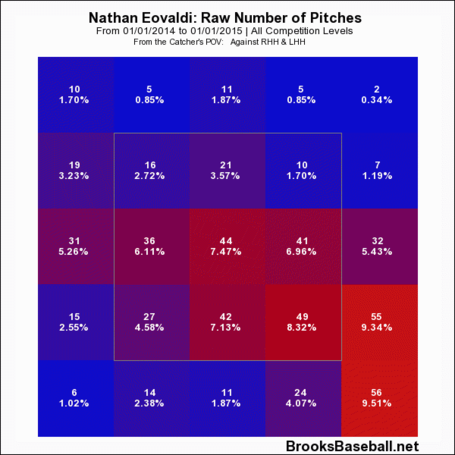 It is early, but the numbers are still up at the bottom half of the strike zone without really increasing lower in the zone. This year, Eovaldi has hit the lower third 20 percent of the time versus just 15.2 percent last season. This goes with the trend that Eovaldi has "tightened" his strike zone, and it very well may be helping him boost his ground ball rate from 44 percent rate last year to 55.5 percent now.

It may be working well for Eovaldi, who has an elite fastball velocity, but what about the other pitchers on the roster? Tom Koehlerhas supposedly improved his fastball, particularly in the command department. But his zone percentage has fallen since last year, and in the early going, only 13.4 percent of pitches were in the lower third of the zone versus 16.1 percent. The standard bearer for this approach is Alvarez, who is well-designed for this approach thanks to his two-seam fastball. His rate of pitches in the lower third of the zone is essentially stable at 18 percent versus 17 percent last year.

The Marlins are not the first team to emphasize contact over strikeouts in an attempt to make pitchers more "efficient." The St. Louis Cardinals famously not only raise their pitching prospects (Jaime Garcia) but also rehabilitate various older projects (Joel Pineiro, Brad Penny, Kyle Lohse) with this style. It would not be a revolutionary move, but the focus of former Cardinals pitching coach Dave Duncan was not only mere control, but also changes in pitching repertoire. This may be the next avenue for Marlins coaches to approach, particularly with their lesser starters. Tom Koehler and Jacob Turner could potentially benefit from learning the two-seamer or cutter.

The Marlins have an interesting approach that, so far this season, has worked well for their starters. The question will be if they will continue this process, especially if the results begin to sour. Here at Fish Stripes, we will keep an eye on the situation.