The Miami Marlins have been taking a three true outcomes approach that has allowed the franchise to be among the league leaders in walks and strikeouts. Combined with their improved power for the 2014 season, the team has gotten off to a fantastic start on offense. In terms of non-pitcher hitting, the Marlins are ranked fourth in offense when accounting for their home park.

The prime example of the team's three true outcomes approach is very clearly Giancarlo Stanton. Yesterday, he added three hits in four plate appearances, including another home run, but over the weekend against the Milwaukee Brewers, he hit two homers and also struck out five times with just one walk. In total, Stanton has had 42 percent of his plate appearances end in a true outcome.

One other excellent example of this type of approach in Miami has been from second baseman Derek Dietrich. In 2014, Dietrich has had 38 percent of his plate appearances end in a true outcome. Dietrich has added unusual middle infield power to a pop-less Marlins team, but more importantly for his career, he has added walks and on-base percentage to his game. After walking in just 4.7 percent of chances last year, Dietrich is getting a free pass in 8.2 percent of appearances this year. In addition, he has been plunked eight times this season.

Dietrich has had some success drawing walks in the minors; he picked up walks in 11.3 percent of appearances in Triple-A before his promotion last season. But after a year in which he seemed reluctant to get on base with patience, he has seemingly gone in the other direction and decided to not swing at anything.

The bolded emphasis is on the huge change in patience between Dietrich last season and this year. Dietrich swung at a lot of pitches last year, a good deal more than the league average of 46 percent, and he had particular problems with swinging at pitches out of the zone. Now, Dietrich has stopped swinging at pitches entirely, as he is tied for the 24th-lowest swing rate among the 220 Major Leaguers with at least 130 plate appearances so far.

The change in approach is more prominent in pitches out of the zone than those in the zone. Dietrich dropped his out-of-zone swing rate by 15 percentage points, or 38 percent of his 2013 rate. Compare this to the nine percentage point drop in swing rate in the zone, which is only a 14 percent drop from 2013. This more specific switch in approach is very visible in chart form. Take a look at his work against righties in 2014 as compared to 2013, thanks to Baseball Heat Maps. 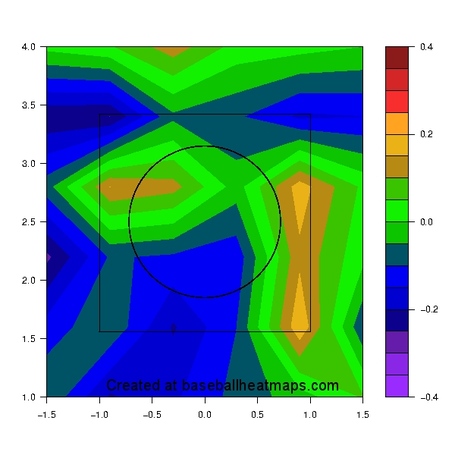 On this map, the darker colors imply areas where Dietrich has swung less in 2014 than he did in 2013. The areas in brighter colors are areas with more swings. In the lower part of the strike zone and even more in areas low and away to the lefty Dietrich, he has laid off of pitches. Dietrich is also laying off of pitches high in the strike zone as well. Meanwhile, those inside pitches and those high and away have gotten more swings than usual, as well they should given that they are in the strike zone. His approach has been more patient overall, but he has mitigated the impact on called strikes by swinging a bit more in select areas in the zone.

The result is that, at least against righties, against righties so far, he has both increased his walk rate and lowered his strikeout rate, which has paid huge dividends for Miami. Much like Casey McGehee's new, patient approach, Dietrich's has led to good results. And the approach is buying Dietrich more pitches in the strike zone; already pitchers have begun attacking him more in the zone than they had before, but that has not affected him this season because of his similar contact rates this year.

Dietrich's most important factor on offense is most certainly his power, and his five homers and 11 extra-base hits in 138 plate appearances are delivering thus far. But just like the case of McGehee and other Miami starters, an increase in walks and a more patient approach can buy him time and success during slumps that occur this season.