Miami Marlins' Casey McGehee and his bounce back season

The Miami Marlins made a shrewd move signing Casey McGehee to a one-year deal coming out of Japan. Something has changed in McGehee's approach that has helped to make him a surprising success so far in 2014.

Share All sharing options for: Miami Marlins' Casey McGehee and his bounce back season

The Miami Marlins made what has turned out to be one of the shrewdest moves in the baseball offseason last year, signing Casey McGehee to a one-year, $1.1 million deal to play third base for the franchise. At the time of the signing, I thought it was an acceptable move for a player who was unlikely to collapse as badly as Placido Polanco did, given that he is just 31 years old. Before the season began, McGehee projected as a 1.5-win player in full playing time, which was an impressive feat and a major improvement over the team's options last season.

Well, so far in 2014, McGehee has done more than prove his doubters wrong, but rather he has silenced them with some surprisingly good play. You hear a lot about his RBIs (he has 30 on the season) batting behind Giancarlo Stanton, but the big deal is that McGehee is somehow hitting .294/.364/.384 (.335 wOBA) so far. That line is 11 percent better than the league average, and it is beating out all but five of the league's current 23 qualified third basemen.

Now here is when we warn you that McGehee is batting .354 on balls in play and that this is unlikely to continue. And yes, his batting average will almost surely fall going forward because we are fairly certain McGehee has not found his Ichiro touch while playing in Japan. But there is something that seems to be changing in McGehee, and it is a trend he showed both in his final season in the majors and in Japan.

In 2012, while playing for the Pittsburgh Pirates and New York Yankees, McGehee batted .217/.284/.358 (.283 wOBA). Almost imperceptible compared to that batting line was the change in strikeouts and walks, as McGehee struck out and walked a little more often that year than he had in previous seasons. Then in Japan, he posted a 20.2 percent strikeout rate and 11.9 percent walk rate in 590 plate appearances for Rakuten. For a guy who seemingly had average swing tendencies, that seemed very odd.

The reason that likely happened is the same reason why McGehee is has walked 20 times in almost 200 plate appearances after walking just 45 times in 600 appearances in 2011: he is swinging less than ever before.

The trend you are seeing is that McGehee figured to swing less beginning in 2011, which actually matches his initial approach noted in 2009 when he hit .301/.360/.499 in 394 plate appearances with the Milwaukee Brewers. Back then and now he has been more patient and it resulted in higher walk rates and slightly higher strikeout rates.

The difference between the 2012 and 2014 seasons so far is his contact rate. McGehee's contact rate had remained steady at 83 percent for most of his career, but he made less contact in 2011 and saw his numbers plummet. For whatever reason, he was not seeing the ball well, likely leading to weaker contact and increased strikeouts back then. The season in Japan may have rejuvenated his efforts, as he is back to an 83 percent rate and has adopted that patience.

We noted earlier in the season that McGehee was specifically being patient with pitches low in the strike zone. There was some frustration earlier that he was taking too many low called strikes, especially when the umps were not calling it his way. The patience on low pitches definitely shows when you look at his swing rates this season versus his career marks. Check out his career swing rates courtesy of Brooks Baseball and Baseball Prospectus. 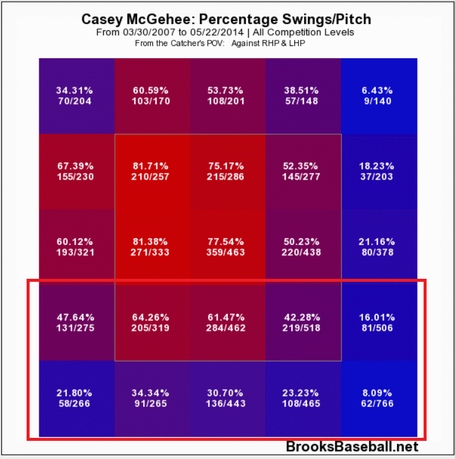 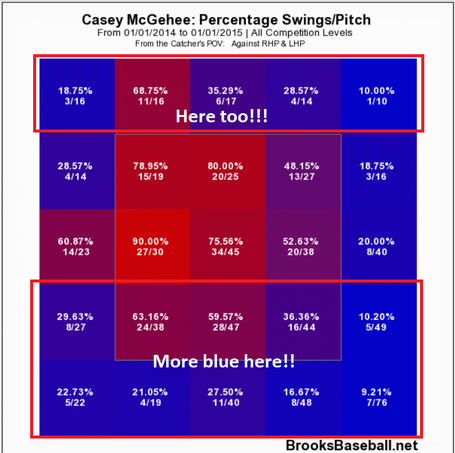 McGehee's avoiding more strikes, but he is also shirking more balls than he had before, and maybe that is the key to his success. He's done so not just low in the zone, but also a little high and a lot on the inside pitches, as evident in this chart against right-handed pitchers from Baseball Heat Maps. 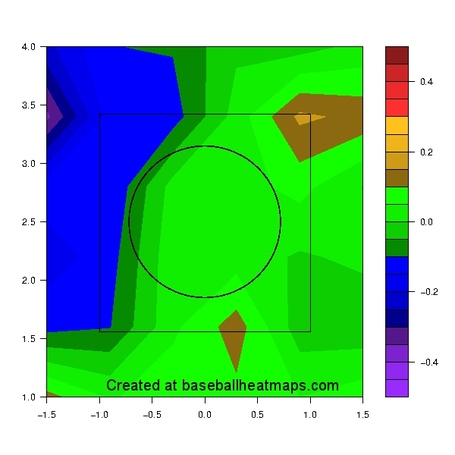 This chart shows a comparison between McGehee in 2014 and his career marks. The darker the color on the map, the less he swinging compared to his career totals. He has completely avoided the inside ball, but he has done a good job of staying on the pitches inside to him in the strike zone. That shows a great measure of selectivity.

Not only does the added selectivity likely give him better pitches to hit, but he has been able to cut out the low pitches out of the zone a good deal, helping him to draw more walks. This approach proved beneficial in 2009, and it may prove the same again in 2014.

The other aspects of his game are still waiting to resolve themselves. The Marlins need to see if his drop in batting average will be made up for by an increase in home run power; McGehee has hit only one homer this season and has an ISO of less .100. He is hitting fly balls with less authority this season than in his career, with an average distance of 263 feet in 2014 versus 291 feet for his career. If this is a sign of true power decline, it might bode poorly for him and the Fish going forward. But the change in plate discipline and approach is real and could be a huge boon to maintaining his game through the ups and downs of a baseball season.