Jose Fernandez injury: Comparing mechanics before and after thigh injury

Jose Fernandez's attorney claims that his client's mechanics changed after he suffered a line drive to the thigh in the fifth inning of his penultimate start. Is there evidence to support this?

Share All sharing options for: Jose Fernandez injury: Comparing mechanics before and after thigh injury

After Jose Fernandez successfully had Tommy John surgery on Friday to repair his damaged UCL, his attorney Ralph Fernandez (not related) released a statement suggesting that an earlier thigh injury caused a change in Jose Fernandez's mechanics that led to the UCL injury. The Miami Marlins and their coaching staff denied that, and two pitchers on the staff who were kept anonymous by the Miami Herald also claimed that they saw no difference.

But some of this can be verified by watching the tape and looking at the numbers, so let's investigate to see any differences in Fernandez's pitches and mechanics before and after the line drive to the thigh that occurred in the start against the Los Angeles Dodgers.

One of the easiest ways to verify changes in mechanics via Pitch F/X data is release point. Mechanics can definitely change the release point of a pitcher, and if Fernandez was moving it around, it might be caught by the data. To that end, I used Broosk Baseball's adjusted data to see if there was a difference. First off you can see his horizontal and vertical release points from 2013 charted here. 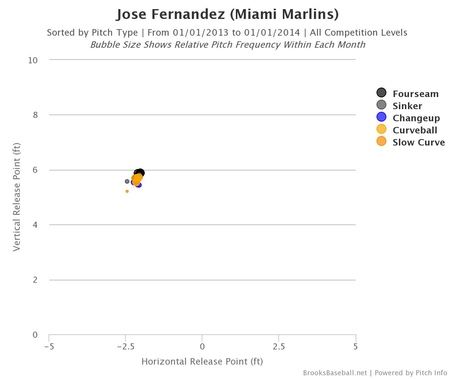 Now here are his pitches from 2014 up to his April 29 start before the thigh injury. 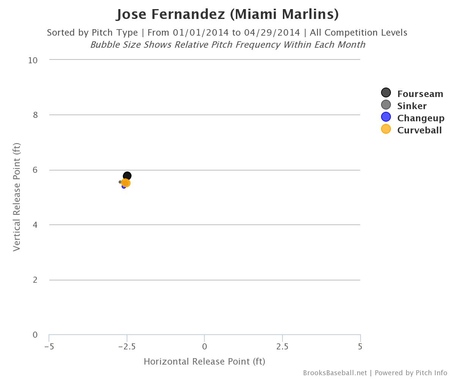 It should be noted here that, between last year and this year, he already made a slight shift to the right side of the pitching mound this season. The move is on the order of 1.2 inches or 0.1 feet, so it was a noticeable move. In looking at the setup for Fernandez in starts from 2013 and 2014, it looks like more of a shift on the mound than a change in the horizontal angle of delivery. On the left is his 2014 delivery, and on the right is his 2013 game. 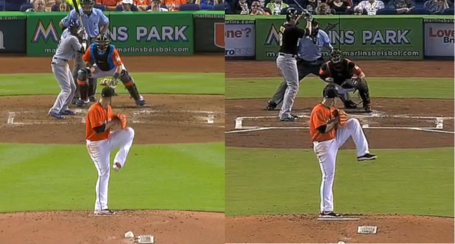 A drop in vertical release is also seems present but this has fluctuated from month to month, starting off high in 2013, than dropping as the season progressed, than beginning at an April 2013 level this season. 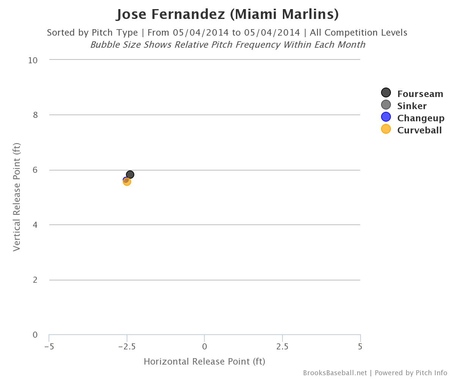 Those do not look drastically different from his 2014 release points from any other time in the season. Sure enough, if you take a look at the April 29 and May 4 starts by inning, you do not see a significant shift in both horizontal and vertical shift. Keep in mind that the thigh injury occurred in the fifth inning. 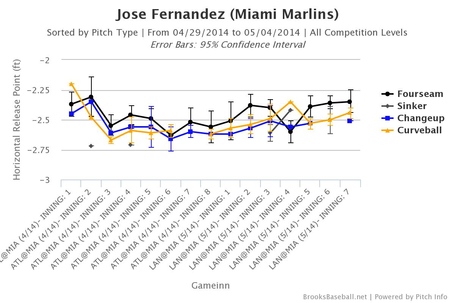 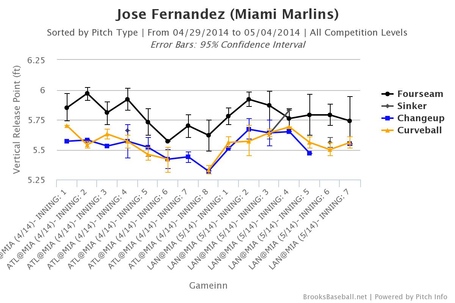 You can extend that also into his May 9 start in which he was hammered by the San Diego Padres and eventually suffered the injury. 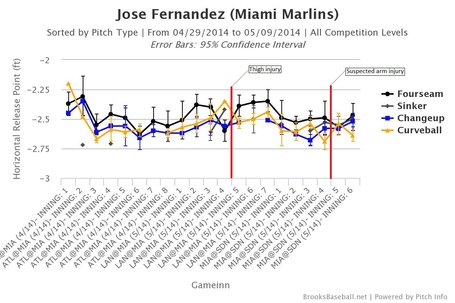 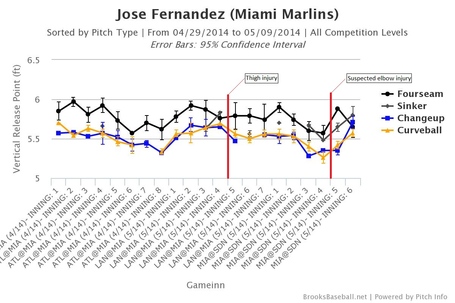 Based on this data alone, you can see insignificant differences between the pre-thigh injury and post-thigh injury Fernandez pitches, at least in terms of release point. If he was changing his mechanics to compensate for pain, then it was not particularly evident in the numbers shown here.

If the release point is not the same, then perhaps there is a change in the motion after the release of the pitch. It seems unlikely that there was a change in motion that hardly affected his release point significantly, but looking at a sample of his pitches from before and after the thigh injury on May 4, it is difficult to see any significant shift in his approach.

This is a first-inning pitch to Hanley Ramirez, a 97 mph fastball that Ramirez eventually hits on the ground.

Take a look at that and compare that to this sixth inning pitch that occurs after the Dee Gordon line drive, in which he gets Yasiel Puig swinging and missing.

Fernandez does look lower to the ground on the latter picture when compared to the former, but that fits with the small shifts in release point that happen over the course of a game; his average release was at the exact same height in the first and sixth inning. The arm slot looks very much the same, released from 60 degrees (with 0 degrees being a siderarm throw). The leg kick may have been a bit lower and the stride a bit shorter in the latter as well, contributing to the lower release point, but given where he was hit in the inner thigh, this would not seem to be a response to the injury. From the cutoff point in the two images, the follow-throughs look highly similar as well, with the right leg kicking far out in both views.

If there is a difference between these particular two pitches, and if we are to use them as representatives of his work before and after the line drive to the thigh, the only thing I see in particular is in the lower leg kick. Not knowing how Fernandez felt during the process, I did not see enough to think that there was a drastic change in approach. Fernandez's motion from windup to follow-through looks essentially like a mirror image, and none of what I saw in his pitches outside of these images indicates him favoring the leg that was hit.

This supports both Mike Redmond's and the two anonymous pitchers' opinions that Fernandez did not change in mechanics enough to warrant damage to his elbow. One would suspect that, if the mechanics had changed that much, it would have been more visible to the naked eye. More likely, Fernandez was an unfortunate soul who had been slowly fraying his elbow with hard throws, and the San Diego start ended up being the last straw. Based on the data I see here, I still say that the Marlins could not have predicted the injury.

What do you Fish Stripers think? Do you see any differences in the above pitches? What do you think about Miami's chances of predicting this based on the motions before and after? Let us know in the comments!