Both Jose Fernandez and the Miami Marlins suffer disappointing setbacks thanks to an elbow injury likely suffered in Fernandez's last start. How will either party recover from this?

The Miami Marlins had some things going for them, even after the Fish struggled with three straight losses versus the San Diego Padres in the most recent weekend series. But no amount of positive thinking can truly spin the potential loss of Jose Fernandez, who was placed on the disabled list with a right elbow strain that could lead to Tommy John surgery depending on the results of MRI exams on the arm.

For both sides, Fernandez's injury is a huge setback. Fernandez's concerns are obvious. Tommy John surgery has done a remarkable job of maintaining careers when these injuries would have otherwise mangled careers. An innumerable number of pitchers have been able to extend their careers for a long period of time after Tommy John surgery, but not every surgery yields successful results. Even the players who have returned often seem at less than full strength; I continue to be unable to shake the loss of velocity from Stephen Strasburg since he had elbow surgery in 2010, along with a subsequent drop in effectiveness between 2011 and 2012 through now. For every easy success story like Chris Carpenter or Adam Wainwright, there are notable other problems such as Ben Sheets, Joel Zumaya, and Daniel Hudson. It's a mixed bag following Tommy John surgery.

Fernandez was easily mowing down most hitters until a surprising drop in velocity during his last start against the Padres. Jeff Zimmerman of FanGraphs and Jason Collette of Baseball Prospectus noted this on Twitter. 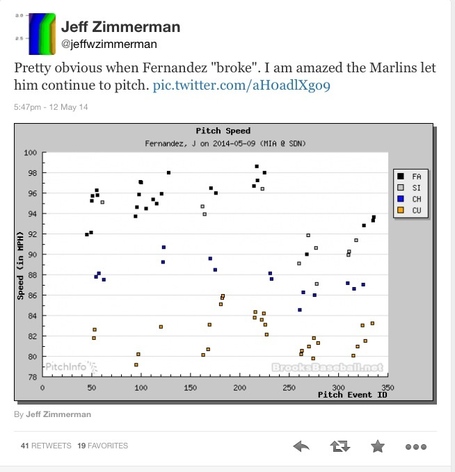 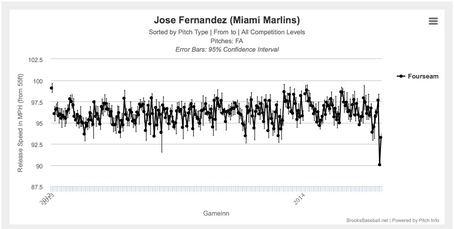 That sudden dip in velocity is what is currently being considered as Fernandez's "breaking" point in terms of when the injury may have occurred. After the gap between the fourth and fifth innings, Fernandez batted and appeared to have a sore right arm during the plate appearance. This may have been signs of the injury, though Fernandez never complained about arm pain after the game in various media interactions.

The challenge for Fernandez going forward will be to recover from the injury. For a good majority of pitchers, the recovery time for the injury is a full year, and Miami's previous experiences with the surgery, Josh Johnson and A.J. Burnett, followed similar timelines. The key will be for Fernandez to retain the killer velocity he flashed before the injury and for his curveball to remain sharp. There is the idea that dependence on sliders (greater than 30 percent usage) and curveballs (greater than 25 percent) could lead to more injury, but it could easily be that Fernandez outdid himself throwing this year and paid the price. Either way, we all wish him a speedy recovery.

For the Marlins, the team is hoping for a speedy recovery as well, if only because the Fish lose a good chunk of value without Fernandez. The team has played well enough to warrant some looks at a playoff berth early, but even if you thought the Fish were more of a pretender in 2014, losing Fernandez takes a bite out of their chances. For Fernande's remaining playing time, he was expected to put up around three more wins this season if he reaches more than 190 innings. It sounds minuscule given how ridiculous Fernandez is, but it reflects a lower run-scoring environment and an ERA in the mid-2.00's. But even if you expect Fernandez is closer to a six-win pitcher over the course of a full season (he has notched 1.6 WAR according to FanGraphs thus far), you are talking about losing four wins in 2014.

Given that we figured Miami would end with about 79 wins thanks to their hot early start, we are now looking at a 75-win franchise by the end of the year, if all other things remain the same. Is that appreciably worse than the 79-win record? Yes, in the sense that the team wanted to show off real progress. No, in the sense that a 75-win team almost has the same chance of making the postseason as a 79-win team.

Where it hurts Miami is in 2015 and beyond, when questions about Fernandez's durability and ability to bounce back will hurt. The 2015 season will likely be the team's first off chance at true contention, but that would have been more certain with a healthy and routinely dominant Jose Fernandez. Missing a year recovering from a major elbow surgery drops the expectations of the man who was perhaps the best pitcher in baseball prior to the injury.

Miami's key is to assist in Fernandez's rehab as much as possible. The training staff will be tested in handling Fernandez during the next year if he has surgery. The front office will face questions about what to do with his pitch and inning counts once he does return. A surgery result will yield a tremendous amount of decisions for this franchise to make.

Everyone is hoping for Fernandez to have a speedy recovery. For Fernandez, a return to dominance and top-flight status, and all of the financial perks that come with that, are at stake. For the Fish, competition as early as 2015 hinges on Fernandez's rehab. Stay tuned at Fish Stripes to see how all of this plays out.