Baseball is a cool sport. I like it. You should try watching it sometime, if you're not busy or anything.

The Marlins thoroughly crushed the feared Colorado Rockies, and now they have slain the unstoppable juggernaut that is the San Diego Padres. Is there anything left for this team to accomplish?

According to this nifty page on FanGraphs, Miami's playoff odds rose from 3.0 percent to 7.7 percent in just five days. That represents a 156 percent increased probability of going to the playoffs, which according to my analysis makes it a mathematical certainty that the Marlins are playing baseball in October.

I would stake my reputation as a baseball writer on this, in addition to the half-eaten bag of tortilla chips on my desk.

Who better to lead the Marlins to playoff glory than Tom Koehler? Now that the season is wrapped up, it seems prudent to crown him the 2014 Cy Young™ Award Winner. I'll only give him a second-place MVP vote though, as that award should really go to Adeiny Hechavarria.

Fun Hechavarria fact: his .550 on-base percentage is lower than his batting average. 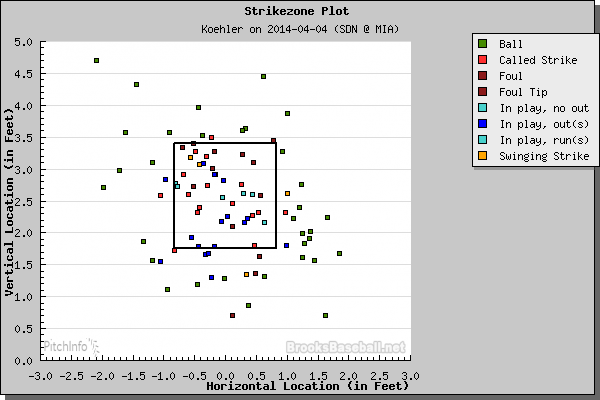 I trot out these graphs when I want to appear to think analytically or something. Look, numbers and lines everywhere!

If you squint at the yellow dots, you'll count four whiffs for Koehler. That's four more than he really needed. Four balls that could have been put in play, which as we know - always find gloves.

While not quite a perfect performance, Koehler displayed his prowess brilliantly last night, striking out one batter. His mastery of this technique is what makes him the ace of the Marlins staff.

Escaping the bases loaded situation in the top of fifth proves that he is the world's most effective dice-roller. The Dice Whisperer.

Kaboom, It's a Home Run!

Oh, right. Hechavarria isn't the only superstar hitter on the Marlins. There's that Giancarlo Stanton fellow, and he hit a home run. This one went very, very far. So far that when the home run structure lit up, two of the metal Marlins detached and flew into the Atlantic, never to rotate around that seizure-inducing acid nightmare again. So long, and thanks for all the hot dogs.

For your viewing pleasure:

I trot out GIFs when I can think of nothing better to write.

Is Marcell Ozuna the greatest center fielder in history? Over the last five days in the state of Florida he is.

Let's extrapolate everything out. The Marlins will win 130 games, Casey McGee will bat 324 runners in, and Saltalamacchia will strikeout 227 times. This is basic baseball science, people.

I'll have more incredibly accurate predictions for you next week. Imagine me as a sabermetric chimera: the conjoined-mutant hybrid of Bill James, Nate Silver, and Tom Tango.

Marlins vs. Padres: Offense shines in 8-2 win over San Diego