Miami Marlins starter Nathan Eovaldi looked as though he was heading towards a career mark in strikeouts on Tuesday night's game against the Colorado Rockies. What worked and did not work for him that night?

Share All sharing options for: Nathan Eovaldi's start: A tale of two fastballs

There was a question at the start of the second game of the regular season whether Miami Marlins starter Nathan Eovaldi could live up to the hype that Jose Fernandez set in the previous night's wild 10-1 victory. We all knew going in that Eovaldi had an equally electric fastball, but his lack of secondary pitches left him with a lot of questions about his game.

Then he struck out the first batter he faced, the strikeout-prone Drew Stubbs.

Eovaldi appeared to be on his way to a dominant night on the mound. But struggles in the fourth and subsequent innings brought his night only to a "strong" level. In the end, Eovaldi struck out six batters and walked one while allowing six hits and two runs. Those numbers all suggest a decent debut, but given Eovaldi's amazing start, you have to wonder just how the evening ended in the anti-climatic fashion that it did. Eovaldi was pulled from the game at 86 pitches, a bit shy of the 92 that Fernandez threw the night before.

When you discuss Eovaldi, it always begins with the fastball. And for his first night in 2014, it really began with the fastball. In the first inning, he quickly disposed of the Rockies' first three hitters, and did so because his fastball was on target. It was blazing fast, averaging around 97 to 99 mph on the gun, mirroring Fernandez's effectiveness. It was also just about the only thing he threw; Eovaldi threw the fastball nine out of ten times in the first inning.

That story more or less continued into the third inning, when Eovaldi still looked dominating. By that time, the fastball was still averaging a shade below 98 mph, so he was still throwing it hard. At that point, none of his fastballs had dipped below 94 mph, and the majority had stayed extremely high. As a result, he was able to be effective with the pitch. Four of his five swings and misses that came in the first three innings came off of the fastball. He threw the pitch for a 7:5 ratio of balls to called strikes. Placement and effectiveness of the pitch appeared to be functioning well alongside his elite velocity.

The 94 mph reading on the fastball before the fourth inning came on one of the last pitches of the third, and it should have been an ominous sign for the future. What followed was an extreme dip in velocity, as noticeable in this velocity chart by Brooks Baseball. 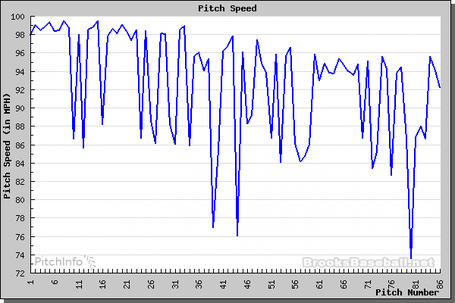 The dip occurs right in the fourth inning, and it is evident. After that point, Eovaldi's fastball never gets past 96.5 mph, and towards the end of the night, it regularly hangs out in the 93 mph area. The drop corresponded with Eovaldi's sudden loss of effectiveness, as his pace of strikeouts decreased and he only picked up three more swings and misses the rest of the night. His balls to called strike ratio increases to 9:4, and while that may not seem like a huge difference in terms of raw count, it could be another sign of his faltering game without speed.

Eovaldis overall performance was just fine, of course. In fact, his overall fastball velocity was excellent at 96.6 mph, which is about half a mile per hour faster than his average all of last season. The problem is that, as always, Eovaldi proved dependent on the velocity of the pitch. Its effectiveness, along with his, dipped dramatically when he failed to pump the gun high. The performance overall was a commendable one and better than Eovaldi was on average last year, but it was still disappointing the way it ended.

The only question now is why his velocity fell so drastically over the course of the game. Was Eovaldi simply gassed from going all out at 98 mph for the first three innings? Did he throw the fastball too often, having gone to that well 66 percent of the time? Isn't that actually a lower number than his 75-plus percent demand on the fastball last year? Could more fastballs be the answer, if only to condition himself to maintain velocity? It is difficult to pinpoint a reason for the dip.

Would a more steady-velocity approach be better? That is impossible to determine. The only thing we know is that Eovaldi's lost fastball velocity was the reason for his second half of the game. If he can avoid that, he should not uncharacteristically crater like that. If this trend of fireballing to flatlining continues, Marlins fans may be in for a starter-based roller-coaster ride beyond what Carlos Marmol should give them.