What is different about Tom Koehler's fastball in 2014?

Tom Koehler's success thus far in 2014 is due to his fastball. But just what is so different about it that is fueling him, and can it continue?

Share All sharing options for: What is different about Tom Koehler's fastball in 2014?

Two nights ago, Tom Koehler had a legitimately strong start for the Miami Marlins en route to an eventual 4-2 loss for the Fish versus the Atlanta Braves. Koehler went six innings and struck out eight Braves hitters while walking two. He did allow a homer to Andrelton Simmons, but he gave up just two runs total, and that continued his impressive season start; at the end of the start, he had a 2.13 ERA.

But even with that eight-strikeout start, at the end of the day, he ended up with season stats that looked very similar to the ones he posted in 143 mediocre innings for the Fish last season. His 17.8 percent strikeout rate and 9.8 percent walk rate are nothing special, and his 3.95 FIP and 4.24 xFIP indicate that he has not really changed all that much.

However, there has been discussion about Koehler's fastball this season, as Fish Stripes's own Scott Gelman briefly covered this week. According to Koehler (from this Sun-Sentinel article), his improved command over the pitch is what has gotten better results in the early part of the year. And the "better results" part is certainly true; after having one of the worst fastballs in baseball last season at 1.3 runs below average per 100 pitches, so far this season his heater is averaging 1.8 runs above average per 100 pitches.

But as with the case of Nathan Eovaldi and his fastball, it is important to see some differences in underlying performance metrics to see if he is indeed doing a better job with it. What can we see as early differences in the fastball between last season and this year for Koehler?

Since his first thought was to bring up the command and control over the pitch, we can take a look at that aspect of it. According to Brooks Baseball, Koehler is throwing both a two- and a four-seam fastball this year, two distinct pitches. This was not the case last season, but I have yet to hear any word regarding the truth behind an honest attempt at throwing two pitches, so I will include both in the same analysis. This season, Koehler has thrown 88 balls and 41 called strikes with the fastball, yielding a 2.1 balls to called strike ratio.

Note that this number is not very different from last season's mark. Last year, he threw balls and called strikes at a two-to-one ratio, which is very similar. In terms of control, or the amount of times he pounds the strike zone, I doubt we can say that he has changed much. According to FanGraphs, Koeher's percentage of pitches in the strike zone has remained identical at around 51 percent, so that supports the evidence that his zone-pounding is unchanged.

As for his location of pitches, there does not seem to be too much difference. Here is his fastball against right-handers in 2013. 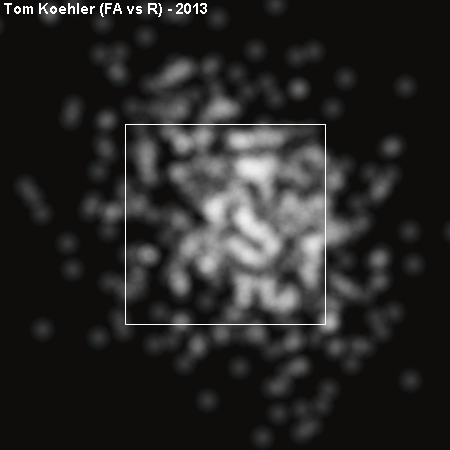 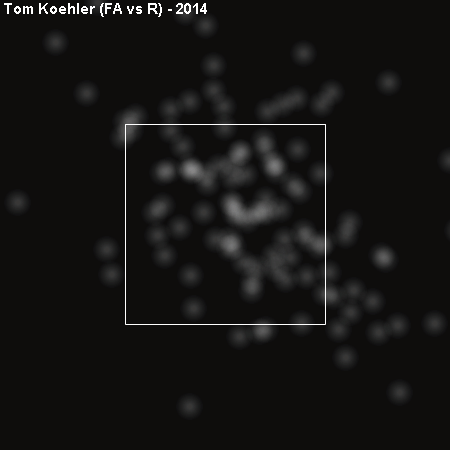 Other than volume, I don't really see a huge change.

The whiff rate, on the other hand, does appear to be a change you can see. Last year, Koehler got swings and misses on just 10.7 percent of opponents' swings at his fastball. It was a pretty terrible performance for a fastball, good for 1.15 standard deviations below the average fastball in 2013. This year, Koehler's fastball is at a 16.7 percent whiff rate on swings,which is significantly closer to the league average.

The reasoning behind the success of the whiff rate is more puzzling. Hitters are swinging at the same rate as they were last season. It's hard to tell if the subtle differences in break that the pitch supposedly has seen has changed the viewing angle of batters. Koehler did have increased success later in the 2013 season, and that did correlate with a steady rise in vertical release point. He has continued that increase in 2014. 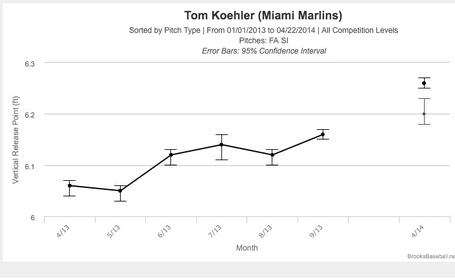 Of course, it is impossible to tell if that is a change that is both real and having the effect that is desired. Koehler's release point is highest in September of last year before this season, and the whiff rate on the fastball then was at 13.3 percent, which was the highest it was all season long.

Finally, the batted ball numbers are currently favoring Koehler. He has increased his ground ball rate by two percent in part because the fastball is getting more grounders on the season (almost 50 percent rate by the four-seamer in 2014). But hitters are also hitting less than .230 against the pitch on balls in play, which is the polar opposite of what was expected after last year's .355 performance. Last season, it was thought that Koehler's fastball, despite passable but unexceptional velocity, was just not good enough to support his good secondary offerings, and the evidence was in how hitters crushed the pitch for a .596 slugging percentage on contact.

It is obviously too early to guess whether that batted ball impact will continue. The Marlins are hoping that Koehler can continue to improve the fastball, however, because he has the secondary stuff to become a passable back-end starter with anything resembling a passable fastball. But without one, he becomes a bad Ricky Nolasco, and Nolasco himself is not that good. Fish Stripes will keep an eye on that release point to see if that sticks around throughout the season.