Miami Marlins manager Mike Redmond made some questionable decisions in bunting runners over with two of his hottest hitters in the bottom of the ninth inning in a tied game versus the Seattle Mariners. Were they "right" moves?

Before Friday night concluded with Giancarlo Stanton's monster grand slam that sent the fans home happy, Miami Marlins manager Mike Redmond made a number of decisions that likely would have come to question had the game not ended in such an epically fun fashion. Reed Johnson had led off the bottom of the ninth inning with a single, with the Marlins and Seattle Mariners tied at four runs a piece. Redmond then had his leadoff man Christian Yelich, almost certainly the team's second-best hitter, and Marcell Ozuna, one of the team's hottest hitters, both attempt sacrifice bunts to move the lead runner Johnson over. The moves ended up working well because Yelich reached on an infield single and a throw to third base on Ozuna's bunt that was initially ruled an out was overturned thanks to the new transfer rule.

Some on the game thread pointed out that Redmond just attempted to toss two potential outs away to move the lead runner forward ahead of Giancarlo Stanton, who made the discussion irrelevant by knocking it out of the park. But I wondered if Redmond's moves were really that misguided. Could he have been "right" to bunt in those situations?

The Yelich bunt was with Johnson on first and no one out. Superficially, one can see the appeal of moving the runner over here, as it puts the man in scoring position with one out. Redmond certainly thought that, and that is why he was willing to toss Yelich under for a bunt. But as fans, we probably want to see a hot bat like Yelich swing away and see if he cannot deliver the run himself or better advance the situation on his own, without the need of the sacrifice.

But recall that a sacrifice attempt does not just lead to a "successful" sacrifice every time. In no instance does sacrificing an out for a runner advancement ever yield a positive win expectancy, even when one run is all that is needed to win a game. In most cases, the sacrifice itself is a negative or nearly neutral event. But players who bunt can yield all sort of different results, including what you saw from Yelich. It is likely that Yelich is at least an average bunter, and it is clear that he is an above-average, heady baserunner. It is possible that bunting with him is a more advantageous choice over the usual hitter in the ninth, making the attempt to sacrifice a more beneficial one. Sure enough, Yelich eked out a single with his bunt attempt.

Of course, the alternate side to this is that, with the benefits so obviously clear to not just Redmond but to the opposing side, bunting runners over becomes a lot harder in the bottom of the ninth than it is in any other inning. According to The Book: Playing the Percentages in Baseball, the win expectancy drops by 0.02 in bunting in the ninth versus swinging away for an average bunter and baserunner. The reason for that is that the defense is expecting it and playing the corners in more aggressively.

So what is the recommendation? The Book suggests that average hitters should bunt about 50 percent of the time. Christian Yelich at the moment projects as around an average or so hitter, and he has the added bonus of being a more skilled and speedy baserunner behind him. Given all of those suggestions, I actually think it was reasonable to bunt in that situation. Hindsight is easy to point out, but the Marlins clearly got the best of both worlds on that first play thanks to Yelich's smart work.

The second bunt, which ended in the controversial play at third base that was initially ruled an out but was overturned thanks to the new transfer rule and the shenanigans it has caused, is even more interesting. Much of the same rules apply to this situation as they apply to the first situation, according to The Book; the first and second situation does not necessarily change the rules regarding when to bunt in the ninth. In fact, a below average hitter should bunt more often than 50 percent of the time. Ozuna, despite the hot streak, is probably still a below average hitter, if getting closer to league average, so it makes that he should bunt.

But the context of the play should be considered. Ozuna is also a decent baserunner, though not at the caliber of Yelich, so he has that going for him. On the other hand, the Marlins just attempted to bunt a runner over from first to second. If the Mariners were not ready for a bunt before, they appeared prime for one at this point. Look where the third baseman was standing. 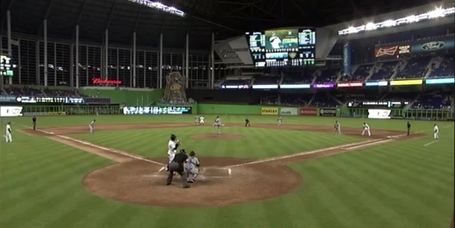 He has his feet on the grass, and he is strictly playing for the bunt. The first baseman is playing in front of Yelich at first base, also anticipating a possible play. The defense was 100 percent ready for a bunt.

In addition, the count has to be considered. Ozuna had a 3-1 count on his side. In The Book, they found that count should not have an influence on the decision to bunt or not bunt, except in the instance of three-ball counts. Hitters are very likely to draw a walk in three-ball counts, so The Book recommends that any non-pitcher be swinging in that situation. Ozuna could have potentially taken a pitch and accomplished the same thing, without the hassle of a replay appeal.

Finally, color commentator Tommy Hutton's point was that Miami had Giancarlo Stanton coming to the plate, and a successful sacrifice bunt would have taken the bat out of his hands 100 percent of the time. Since it is the bottom of the ninth, Stanton's presence at first base only guarantees the win on a walk or hit batsmen, since the runners are already on second and third. Garrett Jones was the hitter to follow, According to The Book, to justify the intentional walk with runners on second and third in a tie game with one out in the bottom of the ninth, the walked hitter needs to be at least 0.83 times as good as the next guy. Stanton is approximately 1.2 times better than Jones, meaning he easily fits the bill. Plus, Mariners manager Lloyd McClendon said he would walk Stanton in absurd situations anyway, such as with runners on first and second! Why risk leaving that decision to im and taking the bat out of Stanton's hand?

For all of those negative reasons, you have to consider that the bunt here was a poor decision by Redmond that was whitewashed in the resultant challenge play and grand slam. Still, it should be noted for posterity's sake that he also made a reasonable decision to bunt the first time around. He just should not have continued to try his luck in that department.