There is plenty of buzz surrounding Cincinnati Reds starter Tony Cingrani and how he works successfully with his fastball-dominant arsenal. Can Nathan Eovaldi learn a lesson from the Reds prospect?

My obsession with Nathan Eovaldi and his intriguing, elite-velocity fastball knows no limits. I have harped on his play for the better part of the last year, and I am infinitely intrigued about how his path to success in the majors will turn out. Will Eovaldi ever learn how to use his slider and tertiary offerings well enough to be successful and get strikeouts?

Well, so far Eovaldi is definitely getting strikeouts. Through three starts, he has struck out 19 batters in 19 1/3 innings with only one walk and one hit batsmen to his name. He has displayed fantastic control over his pitches, particularly his blazing fastball. But it is still tough to tell whether that fastball will be enough to be successful. So when I read this FanGraphs/FOX Sports article by friend of Fish Stripes Eno Sarris on Cincinnati Reds starter Tony Cingrani and his fastball-heavy success, I had to find out how a pitcher who similarly leans on his fastball could do so well. This season, Cingrani has whiffed 20 batters in 17 1/3 innings, though he has also walked nine. Including his excellent debut last season, he owns a career 29.2 percent strikeout rate with a 2.83 ERA and 3.68 FIP. Those are fantastic numbers for a guy who has used his fastball more than 80 percent of the time for his career.

I had to see what similarities I could draw from these two players. They both rely on fastballs, so how can one own a 29 percent strikeout rate while the other just began pumping out strikeouts regularly? First, we turn to what Eno found about Cingrani.

He made it to the big leagues on the back of that fastball, so it's hard to disagree with his approach. What a fastball it is: according to PITCHf/x, only one pitcher threw more than 750 four-seam fastballs and got a better whiff rate on the pitch last year -- Madison Bumgarner. The Reds' lefty even got more whiffs with his four-seamer than gasaholics Matt Harvey and Max Scherzer. And by percentages, only Bartolo Colon threw the pitch more often last year. Of course he's throwing it a ton, it's working.

Indeed, Cingrani's whiff rate on the fastball was an astonishing 24.5 percent last season, and it is sitting at 23.8 percent this year. This is one area that Eovaldi cannot match; since his fastball has jumped in velocity up to 96 to 97 mph regularly, it is still putting up a 14.9 percent whiff rate. Surprisingly, that is actually worse than the league average, which is pretty embarrassing for a flamethrower of a pitch. It should not surprise you to know that Eovaldi depends on the fastball less than Cingrani despite the difference in velocities; Eovaldi's fastball is four to six mph faster than Cingrani's, but he has only thrown it about 71 percent of the time since 2013.

Cingrani does add a level of deception coming out of the glove, which could be adding to difficulty for hitters.

But a large part of Cingrani's excellence is deception. "I use my glove to cover the ball, and it's just how my body works," said the pitcher. "I don't show the ball early." Check out how the ball comes right through where the glove used to be:

How useful is that for Eovaldi? That is not something that can be applicable to him. Miami would dare not tinker with the mechanics of how Eovaldi throws his best pitch, especially since altering those mechanics and trying to "fix what isn't broken" could result in more problems or a decrease in the velocity that makes his fastball special. The Marlins can do very little to nothing to add deception to Eovaldi's fastball.

So while Cingrani has good control over the fastball but, as a lefty with low-90's stuff, is trying to extend the zone Tom Glavine-style, Eovaldi has no qualms peppering the zone with strikes. 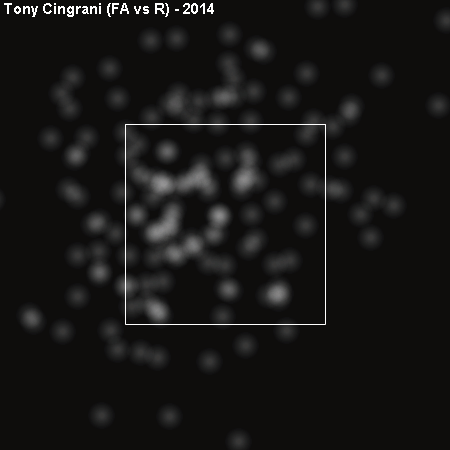 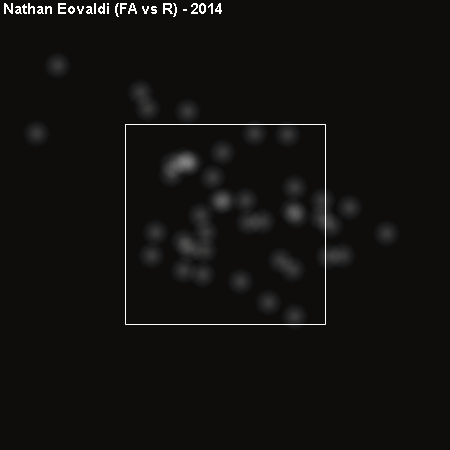 Eovaldi has thrown to fewer righties this season as compared to Cingrani, but you can see that he has rarely strayed beyond the box of the strike zone, while Cingrani has gone high and low to deceive hitters. This could of course be by necessity, as Cingrani would be facing righties without the platoon advantage while Eovaldi would have the edge over righties. But it also displays a little bit of the different approach they have taken to early-season success.

Finally, both pitchers are attempting to work on their secondary and tertiary offerings. Eno mentions that Cingrani has improved on his slider, bringing it up to a league-average rate of swinging strikes. Indeed, hitters are not offering at the pitch often (a product of his early troubles placing it in the zone), but when they do swing, they are missing 58 percent of the time. Eovaldi appears to have a more seasoned slider, as he is close to hitting league benchmarks for whiff rates.

Cingrani has a more pertinent need for a changeup since he is a lefty facing a righty-dominant world, but Eovaldi could use a third pitch as well. The early reports on the changeup and curveball are almost impossible to interpret, as he has only thrown them 23 times total. But thanks to the encouragement of catcher Jarrod Saltalamacchia, Eovaldi has upped his slider usage against lefties; unfortunately, the results have been pretty bad so far (11 percent whiff rate, 2.8 balls-to-called strikes).

In the end, it appears Cingrani and Eovaldi are going on divergent paths to fastball-heavy success. For both pitchers, the key will continue to be developing their next pitches, but the success of their fastballs are from entirely separate reasons. It seems we cannot garner anything from the Reds starter's success for our own flamethrower.