The Miami Marlins were hoping for another strong season out of Jose Fernandez, and his 2014 debut versus the Colorado Rockies gave the Fish exactly what they wanted to see.

Last night, the Miami Marlins soundly defeated the Colorado Rockies in an Opening Night romp, 10-1. Right at the forefront of that victory was Opening Night starter Jose Fernandez, who has taken over the role of staff ace since his stellar Rookie of the Year season last year. The Marlins are counting on Fernandez to deliver a strong second season to solidify his mark as the team's ace, and last night's win over the Rockies delivered everything as necessary.

The first thing that pops out when you watch Fernandez is that his stuff is clearly elite. It is simply too difficult to ignore how amazing his primarily two-pitch combination does on both lefties and righties. It starts with a fastball that may be one of the best in the game already. Given that his bender has such a visual nastiness, it is sometimes easy to forget just how good Fernandez's heater is, but he displayed that pitch fully last night.

It starts with the velocity. According to Pitch F/X (raw data reclassified by Brooks Baseball), Fernandez was averaging a healthy 97 mph on the fastball last night. That is the sort game-breaking heat that relievers throw when going all-out for one inning, and Fernandez was wielding that kind of speed all game. I kept a close eye on the stadium radar gun in the sixth inning, knowing the Fish may pull him fairly soon. He was getting 96-97 mph recorded regularly and touched 99 mph once in the frame, while also tossing in what appeared to be a 90 mph changeup.

The velocity had to play a factor in why Fernandez so easily got whiffs from the pitch. Last night, he got seven whiffs out of 48 fastballs, which is a ridiculous 15 percent swinging strike rate on just that pitch. Typically, the fastball is a weak pitch at inducing whiffs due to its flatter nature, but the higher velocity may have pushed him over the edge versus the Rockies. In 2013, Fernandez induced whiffs on his fastballs swung at at a 16 or so percent rate. Last night, hitters took a rip at 24 pitches, meaning a hitter swung and missed at about one out of every 3.5 fastballs, or 29.1 percent of them. The pitch was on fire, and not even Carlos Gonzalez's solo homer could damper the flames (Gonzalez hit it off a 92 mph fastball that may have been a two-seam variety pitch that Fernandez has shown from time to time).

The fastball velocity was a monster aspect of last night's game, but a fact that was unsung throughout the night that Fish Stripers caught onto early in the game was the elite control that Fernandez was displaying. Watch the above video again for a spot in which Fernandez is setting up for another of his nine strikeouts. At that point in the game, it states that Fernandez has thrown 27 strikes versus just three balls. That rate was simply absurd.

Of course, that takes into account the number of balls in play, including hits, that he also allowed, as all of those generally count as strikes. Hitters were fairly impatient with Fernandez, taking a hack on 52 of Fernandez's 92 pitches. That's over a 56 percent swing rate on pitches, which seems insane; hitters swung at around a 45 percent rate on Fernandez's pitches last season. But when they did not swing, Fernandez still dominated. He threw 21 balls last night versus 17 called strikes overall, yielding a dominant 1.2-to-one balls-to-called strike ratio. That would be a fantastic rate for a pitcher's fastball, let alone taking into account his breaking pitches. When pitches thought it as wise to take a pitch, Fernandez was pounding the zone consistently.

You can see that visually from the strike zone pot that he put up in last night's start. Again, courtesy of Brooks Baseball: 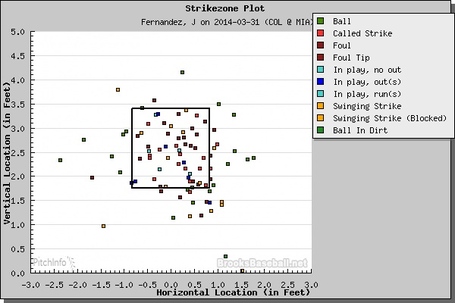 The lower end of the zone was peppered with plenty of pitches, particularly the lower and outer edge against right-handers. But the mark of poor control in these zones are pitches that get away high or too far outside. Fernandez looks as though he lost about 10 or so pitches far out of the zone with little intention (and one of them even went for a swinging strike!), but otherwise the density of the pitches were in the lower outside corner for righty batters and straddling the traditional strike zone.

For a guy with the kind of elite stuff that he brings to the table, this sort of control and command of the zone seems unfair. For his part, Fernandez has never been lacking in this department. Fernandez threw 1.7 balls to every called strike on his fastball last season, and that rate was even crazier for his curveball. The pitch is designed to get looks for strike three, and it did a good job of it, as that pitch hit a ratio of 1.3-to-one for balls versus called strikes. It just so happened that last night, Fernandez was even more on top of it and smothered the Rockies' strike zone in addition to the top-end swing-and-miss stuff.

All in the Family

Fernandez's night was magical, but it was made even more so by seeing his mother and grandmother celebrating in the stands. The TV crew caught them all evening, and there were some loving embraces at the end to cap off a magical night in Miami. Maybe it was the family that inspired Fernandez to play even better than his usual excellent self. If so, can we have his grandmother over all the time?

It was an excellent night to be a Marlins fan, and it was a truly special game for Jose Fernandez. Fish fans have a must-watch event to look forward to every five games as Fernandez takes the hill. Based on that electric start, we may be in for not just a spectacular debut, but for a spectacular season.