Signing Giancarlo Stanton was the first step to rebuilding credibility in the Miami Marlins' organization and the work of owner Jeffrey Loria, but it is certainly not the last.

Share All sharing options for: Marlins' signing of Giancarlo Stanton the first step to rebuilding credibility

Giancarlo Stanton and the Miami Marlins have agreed to the record-breaking 13-year, $325 million contract that sent shockwaves across the media. All over, media outlets had reactions to the deal. Not only did the reactions talk about Stanton and whether he could live up to the value of his new deal, but also about how that deal reflects on the team's front office and ownership. The impact of Stanton's new long-term deal has spread into a discussion about the Marlins organization as a whole and owner Jeffrey Loria in particular.

On the positive side, Bob Nightengale of USA Today believes this is a turning point.

Suddenly, with the stroke of an autograph on a contract, all is forgiven.

Even the broken promises.

Sure, the Marlins have yet to contend since the blockbuster in November 2012 that sent shortstop Jose Reyes and starters Mark Buehrle to Toronto just 11 months after signing them.

Well, that image will be immediately restored this week with the first installment of their $325 million expenditure.

On the opposite end of the spectrum, the ever-present Jeff Passan of Yahoo! Sports.

What that combination can do is make you want to believe the best in people, even people like Loria and Samson, whose last endeavor into big money ended in a spectacular fire sale that drew Stanton’s ire. He was the last person they wanted angry: a monster power hitter in a sport with a dearth, a marketer's fantasy with his handsome looks and multiple ethnicities that appeal to a wide swath, a good person and a grand presence and a dream anchor around which to build, if only the Marlins could build something Loria and Samson would keep together longer than a sneeze.

Joining him, Jerry Crasnick of ESPN.

But it doesn't change the inherent premise: If the rampant mistrust over Loria's pocketing of revenue-sharing money and his other transgressions deprived him of the benefit of the doubt in the past, what precisely has changed now that he's moved on to his next big thing?

The question, as it always is in Miami, is whether Jeffrey Loria can get out of his own way in order to get the Marlins to be a competitive franchise.

The answer, even after this $325 million contract to the best player the Marlins have had since Miguel Cabrera and Hanley Ramirez, is "too early to tell."

Loria came out and told Manny Navarro of the Miami Herald that he would build around Stanton. He would surround Stanton with talent, and that the process was already starting now. Indeed, Miami has the best outfield in baseball secured, with Stanton, Marcell Ozuna, and Christian Yelich all under team control together through 2019. That group and Jose Fernandez represent the current Marlins core for the next competitive team, but it may need help in the form of contract extensions or plugged holes in the rest of the lineup. When the time comes to make additions to the roster, will Loria allow Michael Hill and Dan Jennings to be aggressive and go for it, or will he pinch pennies as he has many times before? 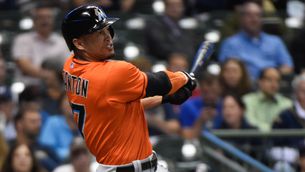 The Marlins signed a record deal for Giancarlo Stanton, who may be generational talent at the plate.

We have seen examples of both sides of this coin. The Marlins traded Derrek Lee away after the 2003 World Series, but after a disappointing 2004 season, they signed Carlos Delgado to a record contract for them at the time. Of course, Delgado survived just one year in Miami before being traded after a repeat disappointing campaign in 2005.

On the other hand, the Fish had come so close to the playoffs in a surprise 2009 run that Loria actually considered firing manager Fredi Gonzalez because he fell short. Yet in the offseason, Miami did nothing to plug the obvious holes at first and third base among other things and regressed in 2010.

The fickle and rash decision-making of Loria is also still in question, no matter how long the team reports a commitment to Stanton. Miami took just three months and change to decide the 2012 core was not a contender, and they wiped away a healthy amount of goodwill in a fire sale trade that made baseball sense but took another shot at their credibility. Who's to say that, even with a no-trade clause, that such an immediate teardown around Stanton would not happen again if the Marlins struggle through another first half?

Signing Stanton is a start. It signals to free agents that at least one of these building blocks is around, and that a competitive window is open for these next six years if the team establishes a solid foundation around Stanton. It does help to mitigate some of the trepidation left over from the nasty way the fire sale trade of 2011 was supposedly handled. But that help may not be this year, with a weak free agent market and a team with question marks remaining after a positive season. It may take another year or two for Miami to build credibility to acquire free agent talent.

The Marlins should be choosy on whom they spend. But Loria will have to spend to make this team better

And that's OK. The Marlins should be choosy on whom they spend. But Loria will have to spend to make this team better; this has been necessitated with the six-year window of Stanton's stay. But if he does spend, and the front office makes wise use of the allotted money, the Marlins may get what ultimately wins their credibility back entirely: wins. Ultimately, signing Stanton is not only a signal to the outside world and to fans, but it is securing a certain number of wins. If Miami accumulates enough of them, the fans will start to filter back into the beautiful Marlins Park, public-paid or otherwise. And that's because, despite all that Marlins fans have gone through, the city of Miami appreciates just like any other market, and they will pay to see a winning baseball product.

That is how Loria and company can really build credibility. Stanton is the first step. The next step is building around Stanton to get to that winning product. With wins comes the respect of fans and eventually of the outside baseball world.