The Jose Fernandez elbow injury that required Tommy John surgery was perhaps the biggest single blow to the 2014 Marlins season.

The Miami Marlins' 2014 season was flowing pretty smoothly early on in the year, with the team's offense clicking and the pitching staff overperforming. Part of the reason for that was the excellent play from Jose Fernandez. Fernandez won the 2013 Rookie of the Year and finished in the top three of the National League Cy Young voting that year despite an innings limit. The 2014 season was supposed to be a year in which Fernandez established himself further. Instead, it turned into a disaster that landed him out until the middle of 2015.

It certainly started off very well. Fernandez was his dominant self for much of his first eight starts of the year. He was posting a 2.44 ERA and 2.18 FIP through those eight starts, and he was going deep in those outings as well. Fernandez threw close to 6 2/3 innings per start, and he was racking up strikeouts and limiting the bad stuff all throughout. Through just 51 2/3 innings, he had whiffed a whopping 70 batters, which at the time led all starting pitchers. To put that into context, in more than three times the number of innings pitched, Henderson Alvarez only struck out 40 more guys than Fernandez did. That seems insane.

Through seven starts, things were looking fantastic for the Marlins' rotation and for Fernandez. But a thigh injury off a batted ball limited some of his movements against the Los Angeles Dodgers, and there was some concern that an injury may have arisen between the time of the Dodgers outing and Fernandez's next game against the San Diego Padres. Apparently, Fernandez felt some right arm discomfort in his throwing session in between starts but neglected to make mention of this to the Marlins' staff. He went out knowingly at less than 100 percent and with discomfort prior to the San Diego start (not to mention with some apparent food poisoning). There was also a question of changed mechanics because of the minor thigh injury from the Dodgers game, though this site did not find a significant mechanical difference. 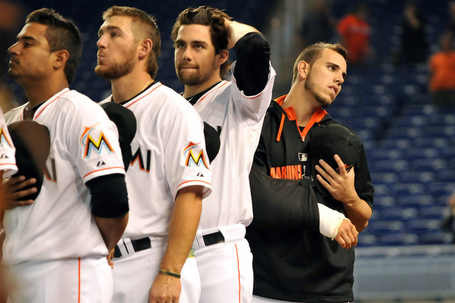 Either way, something terrible happened in that Padres start. Fernandez was shelled, having given up two home runs and six runs in six innings. He also looked notably gassed at the end of the outing, and his fastball velocity fell precipitously into the low-90's from his usual perch at 95 mph and above. The combination was highly concerning, and a few days later the Marlins announced that he would have to go on the disabled list. Eventually the team noted that he had a UCL tear that would require Tommy John surgery and that he would miss the rest of this year.

Much was made about why the injury happened and whether the Marlins could have avoided it. It is very likely that there was nothing that Miami could do to avoid the injury. Some camps think otherwise, and it is worth further investigation in this world of seemingly increasing pitcher injuries. But either way, it is hard to deny the effect it had on the roster. Miami had to replace Fernandez with significantly inferior pitchers, and the results were a loss of almost four wins. Losing that many wins in a team in the Wild Card race could have cost Miami a shot at the playoffs this year.

Then again, the Marlins did keep winning without Fernandez, and that is a silver lining to his injury in 2014. The Fish pulled off their best season since 2010 on the back of an improved offense and pitching depth. Add Jose Fernandez in the middle of 2015 to the excellent depth they already have, and you can see how Miami might be in excellent shape to contend in the next two years, provided Fernandez makes a speedy recovery.