The Miami Marlins not only got contributions from Giancarlo Stanton. They also developed the best outfield in baseball thanks to excellent seasons from Christian Yelich and Marcell Ozuna.

The Miami Marlins had Giancarlo Stanton and his excellent season at the plate and on the field, and that year really helped the team put up 77 wins in a comeback 2014 season. But if Stanton were the only consistent position player contributor, the team probably would have been sunk earlier in the year. Instead, the team had more help than was expected, and it came in the form of the club's other two outfielders. Christian Yelich and Marcell Ozuna are both young and had short, interesting stints in 2013 with the team. In 2014, they established themselves as excellent players and, combined with the superstar Stanton, the group became the best outfield in baseball.

Christian Yelich's key to success is in his balanced value in each aspect of the game. Despite a poor strikeout rate, he is a patient and effective hitter who does not hit many weak baseballs. He walks in plenty of appearances and sees lots of pitches. When he gets on base, he was a spectacular value on the basepaths, adding on 21 stolen bases in 28 attempts. Despite all of the ground balls he hits, he rarely hits into double plays compared to the average player.

Then you take him out of the offensive context and put him in the expansive Marlins Park left field, and Yelich thrives there too. According to most defensive metrics, Yelich was at least above average and at best a Gold Glove candidate in left field compared to average. Both UZR and DRS had him worth 13 runs above average in left field this season, though he was a net negative in his time spent filling in in center field. Overall, Yelich was a positive contributor on defense despite him playing a traditionally weak defensive position.

This balanced approach is what eventually gave Yelich a four-win season this year according to FanGraphs. He put up a little bit of value in every category, but those runs add up; according to Fangraphs, he pulled off his 20 runs above average in tiny increments rather than in one category like Stanton did. That adds up without catching a lot of attention, but Yelich deserves a lot of credit for doing this much at 22 years of age. His next step is to improve on the power, after which the sky is the limit. 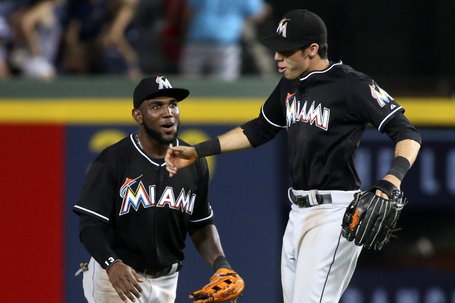 Marcell Ozuna was known for his power and his arm, which is exactly the opposite of what Yelich does best. Nevertheless, Ozuna found both of those things in 2014, and he too provided an excellent season of support for Stanton. While Yelich walked and singled his way to a .284/.362/.402 (.341 wOBA), Ozuna launched long balls on his way to a .269/.317/.455 (.338 wOBA) line that ended up being of similar value. The power that was missing in 2013 came in spades this year; Ozuna launched 23 home runs, which was the largest amount by a non-Stanton Marlin since 2011. It turns out Ozuna has just made harder contact this year, with more balls dropping into shallow center field and more driven deep to or past the fence. Both of these combined to make for a significantly better year at the plate despite the problems with strikeouts (26.9 percent strikeout rate) and lack of patience (6.7 percent walk rate).

Ozuna also excelled on defense, as he did last season. But while Yelich was all about range in 2014, Ozuna flashed both that and a killer arm. He tossed out 10 runners in the infield with that gun, including two impressive outfield throws from left field in one game. According to UZR, Ozuna added almost eight runs above average just on throwing out runners and suppressing the running game with the threat of gun-down. Among qualified outfielders this year, that was the third-best number of arm-based runs in the game, behind only known cannons Yoenis Cespedes and Leonys Martin. If you buy that Ozuna showed great range this year as well, he would have rated even better defensively.

As it stands, with UZR's rating of his defense, FanGraphs put him as nearly a four-win player, which is a huge accomplishment for a guy who was once considered the third-best outfield prospect in the Marlins' system. While Yelich has clearly panned out, Ozuna has far surpassed his former competitor Jake Marisnick, who is now in Houston. While Marisnick is still struggling to turn his tools into on-field success, Ozuna has already figured out the secret and begun contributing in a big way in the Majors.

The two other outfielders on the Marlins are a prime reason for the team's 2014 success. Without this added help, the Fish would be down another eight wins this year. Compared to the scrub play we saw for half of 2013 from guys like Juan Pierre and Justin Ruggiano, these two players were a sight for sore eyes.