The Miami Marlins' biggest offensive hole is at shortstop, where potential Gold Glove defender Adeiny Hechavarria has failed to develop entirely at the plate. Can his offense pick up?

The Miami Marlins have nine important questions to deal with in 2014. One of those nine questions is critical to the future of the franchise, and that resides at the shortstop position. Adeiny Hechavarria is clearly a talented defender, even if the initial numbers from his rookie year suggest a more average talent. It is possible that, once he cuts out some of the mental errors that caused his high error count from last season, he can compete for Gold Glove awards with the likes of Andrelton Simmons. But on offense, Hechavarria looks truly lost, and with Miami lacking depth in the true shortstop position in the minors, the team is counting on him to figure out that aspect of the game enough to be a contributor in the majors.

MLB.com's Joe Frisaro previewed that problem in his response.

7. Can Adeiny Hechavarria's offense improve? Defensively, the Marlins believe Hechavarria is a Gold Glove-caliber shortstop. Hitting remains a question. In time, the club feels its flashy shortstop will become productive at the plate. At some point in his career, he could fit the mold of a No. 2 hitter. That won't be the case until he gets better plate command. In the offseason, Hechavarria has been working on an up-the-middle approach the team hopes he carries over into next season.

All of this is meaningless in terms of analysis. Hechavarria has not shown any discernible skill at the plate thus far in his time in the big leagues. Since 2012, there are only two Major League hitters worse than Adeiny Hechavarria at hitting the baseball, and both are terrible slap-hitting shortstops with elite gloves (Brendan Ryan and Clint Barmes). The elite glove aspect has not helped them stick as Major League starters either; while both Ryan and Barmes have averaged between 13 and 15 runs above average each year with their fielding, they still have recorded just under 2.5 wins combined over two years and 1600-plus plate appearances.

That is the fate of Adeiny Hechavarria if he never figures out how to hit, and that is if he develops into a Gold Glove defender like Ryan or Barmes have. Hechavarria stands a better chance of at least trying to improve on the bat, but those skills are missing. Like Barmes, Hechavarria has a triumvirate of problems at the plate: he doesn't walk enough, does not hit the ball hard enough to do well on balls in play, and has no power. Very few players can be successful in the big leagues if you cannot get on base with hits or walks or deliver some power via the home run. This combination has left Hechavarria with a low batting average (.232 since 2012) and terrible performance on the things that matter in hitting.

To make matters worse, Hechavarria is not a good baserunner either. He stole 11 bags last season but was caught 10 times, and overall he has cost his team three runs on bases over the last two seasons.

So what can Hechavarria do? He does make contact with the ball decently. Like most slap hitters, he boasts a contact rate on balls in the strike zone of over 90 percent. He also does well out of the strike zone, where he has made contact on 72.9 percent of pitches swung at for his career. That rate is the same as players like Matt Carpenter and Ian Kinsler have put up since 2012. As a result, Hechavarria only struck out in a respectable 17.9 percent of plate appearances.

The problem is that contact does not help when you cannot put it safely in play. Hechavarria's issue is that he is either making naturally weak contact or poor contact in general on those pitches. His slugging percentage on contact plays (SLGCON) is at .384, which is good for 10th-worst since 2013. His complete lack of power essentially leaves him in a crew of terrible hitters; 11 of the 20 worst hitters in SLGCON over the last two years had among the 30 worst wOBAs in baseball in the last two years. Having a complete lack of power puts additional pressure on Hechavarria to get more singles to compensate, and he strikes out at just enough of a rate to make that difficult.

When he does make contact, the ball does not seem to land safely all that often. Take a look at the BABIP for Hechavarria in each of the various strike zone areas. 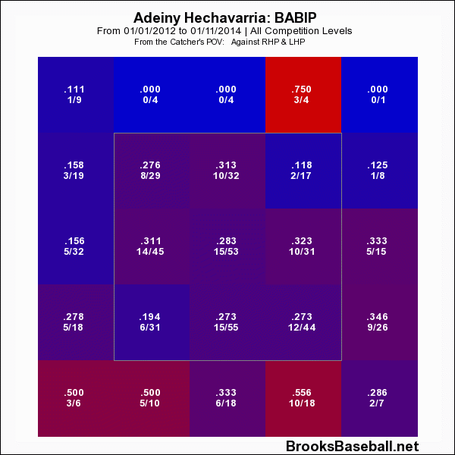 For context, this is the same chart for Giancarlo Stanton since 2012. 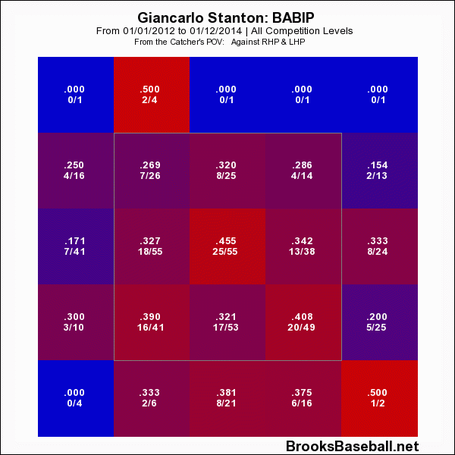 As you can see, Hechavarria is not nearly as hot as he should be inside the zone, where the contact made should more generally yield hits. Especially disappointing is his work in the center of the zone, where he has hit just .283 directly down the middle. It can go back to his lack of power; Hechavarria's career ground ball rate of 51 percent is far more likely to yield meek groundouts rather than singles, and his fly balls have been ineffective as well, as he has hit just .106 on them for his career.

For Hechavarria, the hits are not coming as they need to, and combined with his terrible eye at the plate (he swung at 34 percent of pitches out of the strike zone), he has failed to get on base. Pitchers know that they can attack him in the zone because he lacks power and has been unable to turn on those meaty strike zone pitches effectively.

The Marlins will have to find a way to fix enough of Hechavarria's game to make him relevant offensively. Even if he becomes a world-class defender, he may still not be an average player if he continues to hit as poorly as he has. Over the next few years, this may be the most critical question for Miami to answer, either by fixing Hechavarria or replacing him entirely.