The Miami Marlins supposedly received a trade offer from the Pittsburgh Pirates for Giancarlo Stanton. Would the package have been worth enough to pry Stanton from Miami?

The Miami Marlins supposedly received an offer for Giancarlo Stanton from the Pittsburgh Pirates, and reports from Marlin Maniac revealed that the package was significant.

We already discussed a little about this potential trade offer, but it is worth going through the projections and the math to determine whether or not the Marlins are getting good value for this trade. To do this, we are going to look at the old numbers from this Beyond the Box Score article combined with projections provided by ZiPS and shown on FanGraphs.

The major part of this deal is Stanton, and his value will constitute the majority of the value of the Marlins' side of the package. Right now, ZiPS projects a .275/.366/.569 (.399 wOBA) for the remainder of the season. Combine that with his defensive value and 169 remaining plate appearances and the projection is that Stanton would be worth 1.6 wins.

Let's assume that the half-season is over and the Marlins receive a similar offer at the end of this year. Stanton would be projected to be worth 5.7 WAR per 600 plate appearances. That seems like a very reasonable pace for a player who has been a star and will be 24 years old next season. But how much playing time can you expect, given that Stanton has missed games with injury in each of the past three seasons. A reasonable estimate would be to project Stanton's playing time based on a weighted average of plate appearances from the last three seasons. Using a typical Marcel system of projection (the last season is weighted as five times, the season before at four times, and the season three years ago worth three times), Stanton would be expected to record 525 plate appearances next year. 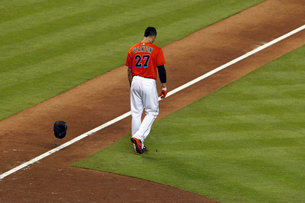 The Miami Marlins supposedly received an offer from the Pittsburgh Pirates at the trade deadline for Giancarlo Stanton. Marlin Maniac reports that the package included top pitching prospects Gerrit Cole and Jameson Taillon.

Assume he does that and keeps this WAR pace from now until the end of his arbitration season in 2016. With no improvement on his game, Stanton would be expected to be worth $66.4 million on the free agent market. Given that he is likely going to be paid $30 million in the next three seasons, Stanton would now be worth $36 million in surplus value. Compare that with the value when including this year, which would have brought up that value closer to the $80 or so million we had figured before the year.

This is very similar to the value Miguel Cabrera held back when he was rumored to be traded. Indeed, it should be worth a similar value that the Marlins received in return for Cabrera.

These two players were evaluated earlier, so we will take them at a similar value. Each of these players is expected to lose some value, but they were very similar in value by the trade deadline. Taking away about $3 million from their value, let's estimate their combined value at $15 million.

That puts the Marlins' proposed combined package at $51 million in surplus value.

Cole has pitched 37 innings in the majors already, and projection systems do have numbers on him. At the same time, he was also an elite pitching prospect by most regards, and that qualification has value. Since we know a little more about Cole's chances than your typical pitching prospect, we cannot assign him a value of $16 million as shown in that Beyond the Box Score article, as that would probably undershoot his value. Then again, we cannot estimate him as a league average pitcher or better going forward, if only because that would make him extremely valuable without knowing much about him.

Taking an estimate and weighing his prospect value versus currently projected value at a 4-to-1 ratio, we get an estimate of $30 million in surplus value. That is pretty generous, given that Cole has thrown just 37 innings, but given that he was the third-best prospect in baseball by most eyes before the season, I'd be willing to accept this.

Taillon is the 11th-best pitching prospect in Baseball America's midseason update, but he was a top-20 pitcher before then. Such a pitcher is also still worth $15 million.

Marte is the wild card in this offer. Unlike Cole and Taillon, Marte is no longer a prospect, but rather a player with 661 plate appearances in the majors. Thanks to a stellar season in 2013, Dave Cameron of FanGraphs ranked Marte as the 31st most valuable player in baseball in terms of trade value. He has five seasons left of team control and is easily right now an average player.

ZiPS projects a .269/.313/.433 (.326 wOBA) with good defense in the corners, yielding a projection of 1.0 WAR in 195 plate appearances. Project that to 600 plate appearances and you will get three-win player heading into his second full season. Projecting some moderate improvement in his play over five years and you would expect him to be worth $84 million in surplus value.

Let's call the addition of Allie to the deal fairly negligible. This would make the deal overwhelmingly in favor of the Marlins, who would be getting $129 million in value versus giving up $51 million. In such a mathematical look, the Fish would come out as major winners in such a trade.

But take a step back and look at the FanGraphs trade value list again. In the top ten, we see that Stanton is ranked eighth, next to players like Paul Goldschmidt and Matt Harvey. Why is he ranked so highly? Cameron discusses that.

Yes, right now, he’s only got three years of team control remaining, but a team acquiring him is acquiring him for the right to lock him up, and his cost is going to reflect that right. Franchise players like this aren’t available in their early-20s very often, and even coming off a down year and somewhat concerning knee issues, the price is going to reflect the rarity of a player like this on this on the trade market.

Much like when the Fish sent Cabrera away, the team is not only trading away Stanton's on-field value, but the opportunity for a solo negotiating window of three years. That value, tacked on with the fact that Stanton is a superstar-level player, makes him more valuable than his contract holds. No one would agree that dealing Stanton for Marte would be fair value for the Fish, even if Marte projects decently into the future.

How much more valuable would Stanton have to be in order to override the gap in the math? We know he is more valuable than Marte alone, and it is likely that we are overestimating Marte's value. If Marte is about half as valuable as projected here (say due to uncertainty about durability and sustainability of performance given his one-year track record), while Stanton's projections are more likely to be true and thus more reliable, we could see the Marlins making this move at a difference of $36 million in surplus value tilted towards the Fish. And given that it is reasonable to suspect that Stanton is more valuable by a good margin over Marte, his superstar trade value may actually even those numbers out.

All of this is to say that trade value is not an exact science, particularly when you are dealing with superstars or young, cost-controlled talent with one year of performance. All we know is that those pitching prospects and Marte would be a fantastic package and that Stanton's value may very well trump almost all of them, particularly if the acquiring team values the negotiation window and superstar rarity. In the end, I'd say the offer is close to even or tilted towards the Marlins, with the likelihood that it is more towards MIami than it is a "fair" offer.

But hey, it didn't happen, so no worries, right? The Fish will wait and see what the future holds for Stanton.