Miami Marlins starter Nathan Eovaldi and the potential of "potential"

Miami Marlins starter Nathan Eovaldi has a blazing fastball and oodles of potential, but how much does potential matter in the face of questionable numbers?

Share All sharing options for: Miami Marlins starter Nathan Eovaldi and the potential of "potential"

The Miami Marlins and Los Angeles Dodgers recently faced off, and it provided Nathan Eovaldi a chance to face his former team and try and impress his employers both current and past. His performance on Tuesday was decent, as he struck out five batters and walked two while allowing three runs total in seven innings. It was another in a string of decent, but unspectacular outings for Eovaldi.

The reason why he remains a topic of discussion is that he has recently developed a fastball that has gone from "above-average" to "electric" in quality; Eovaldi's new fastball has jumped 2.5 mph in velocity. That has caught the eye of a lot of people, as evidenced by this article from Joe Frisaro of MLB.com.

"Eovaldi, this guy is going to be a monster," Marlins manager Mike Redmond said. "This kid has so much upside. He's just a work in progress. He's going to be a dominating pitcher in this league for many years to come. He still has a lot of room to grow. There are areas of his game, and his pitching that can totally improve -- like his off-speed pitches, and commanding those pitches, and continuing to be able to command his fastball. This guy, his upside is off the charts for him."

The word that was mentioned on there was upside, and that is a particularly important word for Eovaldi. In 224 2/3 innings thus far in the majors, a little more than one full year for most starters, Eovaldi has a respectable but uneventful 4.04 ERA and 4.05 FIP. His strikeout and walk rates are below the league average, and his numbers have been buoyed by low home run rates. Those home run rates might be a result of playing in large parks all of his career, as both Dodgers Stadium and Marlins Park allow fewer than average home runs.

In other words, in Eovaldi's first full year-plus as a Major League starting pitcher, he held his own but has been mediocre overall. It is decent yet underwhelming, even for a guy who has only thrown one season's worth of pitches. Eovaldi seems to have electric stuff, but his numbers suggest another pitcher. When we look at his similarity scores on Baseball-Reference, we see a bunch of mediocre names littering the list of players most similar through age 22. The four pitchers on the list who threw in the most recent era in baseball (let's say past 1992, when the scoring environment began to climb) were Carl Pavano, Tony Armas, Randall Delgado, and Adam Eaton.

One of those players is relatively new to the game, while the other three are veterans with varying degrees of success. But when we examine all four players' careers since their age 22 year, the numbers do not look pretty. The four combined to throw 3606 innings after age 22 and post a 4.65 ERA (unweighted average of 4.51) and a 91 ERA+ (92 unweighted). In other words, the four pitchers whose numbers most closely resemble Eovaldi's through last season were pitchers who were eight percent below the league average. 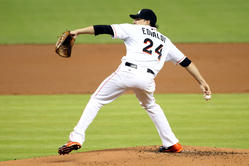 The Miami Marlins have to be impressed with the brand new, very real velocity on Nathan Eovaldi's 2013 fastball. But how does it compare to his fastball of last year?

If we broaden the spectrum, I looked for all instances since 1992 of a player putting up a season at or before the age of 24 with an ERA+ between 90 and 110, strikeout rates less than seven per nine innings, and walk rates greater than three per nine innings. A total of 137 player seasons showed up, including Eovaldi's season last year, with 116 players putting up those non-Eovaldi seasons. If we take the average of their entire career's worth of work, the group had a raw average of a 95 ERA+ and 7.3 WAR for their careers, ongoing or otherwise, as a group. For rate, they average 1.8 WAR per 200 innings as a group. The best player was C.C. Sabathia at 54 wins and counting, with 33 pitchers getting more than 10 WAR for their careers.

That is a steep hill to climb for Eovaldi, given that his numbers are similar to these groups of players. The proof is overwhelming that the odds are on Eovaldi turning into an average pitcher when you go by the numbers. But there is something that this comparison does not see, and it is that blazing fastball. Very few starters on those lists could match fastballs with Eovaldi's 97 mph heat, and that pitch alone is allowing Mike Redmond and everyone else to dream on the young pitcher. But even with that fastball, there has to be a reason why the numbers have not improved.

Of course, we all know that that very real reason is his secondary arsenal. As everyone has mentioned, if he ever figures that out, he could be a monster on the mound indeed. But the good money is on him not figuring it all out and becoming more of an OK player than some second coming of Justin Verlander. Still, when faced with the alternatives of sure-fire low-ceiling players like Henderson Alvarez, it sure is nice to have a ceiling through the roof like Eovaldi's, and Marlins fans should at least be happy about that.