Pitches have pitched differently to Miami Marlins outfielder Giancarlo Stanton, and that may be affecting his performance. But what exactly is the problem? Do we even know?

It is no secret that Giancarlo Stanton has struggled throughout the 2013 season for the Miami Marlins. It started earlier in the year, and aside from a few hot weeks in June after his return from a hamstring injury, he has faltered badly. The million dollar question for this year has been why, and that has been harder to illuminate.

A look at his season statistics show a couple of salient points. For one thing, Stanton's struggles this year have nothing to do with strikeouts. Sure, he is whiffing in 26.5 percent of plate appearances, but that is actually below his career mark and represents the best percentage he has ever posted. Due to the distinct lack of "protection" in the Marlins lineup, he has also received the highest number of pitches out of the zone that he has ever seen, and that has upped his walk rate. He has swung at fewer pitches outside of the zone thanks to the new approach against him, and he is making contact on the same percentage of pitches as he has all of his career.

The obvious problem is the lack of power from Stanton. For a player with a career ISO of .268, his current .201 mark is highly disappointing, especially coming off of a fantastic 2012 campaign in which he hit 37 homers in just 501 plate appearances. This year, Stanton has hit just 13 homers in 328 appearances thus far.

On the surface, it is difficult to see any cause for the power problem. Stanton is not displaying any clear mechanical problems (but if you see anything, let us know), and his plate discipline is apparently intact. But perhaps the new approach is changing the quality of his swings, and that is masked when analyzing the overall numbers. Let's take a look at his performance in different parts of the strike zone with the help of Baseball Prospectus's and Brooks Baseball's hitter profiles.

Where is He Pitched?

It does not take fancy statistical analysis to see that Stanton is being thrown out of the zone more often, but it is nice to have the proof that that is the case. Take a look at his location chart from the 2012 season (all charts from Brooks Baseball). 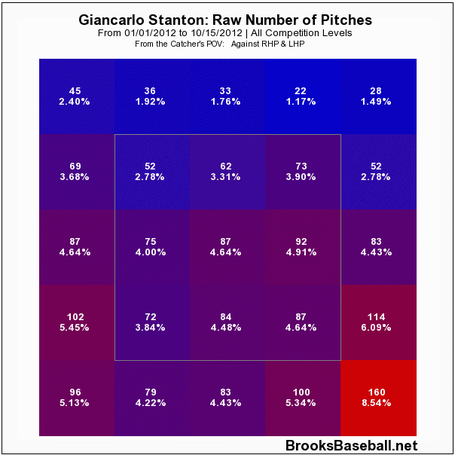 Compare that to the 2013 version of that chart. 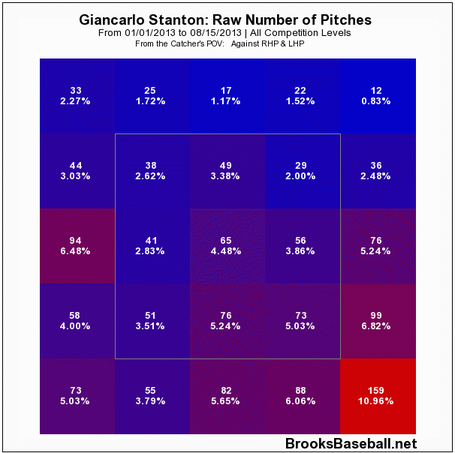 This season, there has been a clear and significant change in the percentage of pitches Stanton has seen in the traditional strike zone. In particular, it is clear that Stanton is being thrown to less on the inner half of the plate, as shown by the increase in blue seen in the 2013 chart as opposed to the more magenta-colored 2012 chart.

Where are all those pitches going? A good number of them are heading to the outer half of the plate, but in particular low and away. Stanton has around 170 fewer plate appearances this season as compared to last year, yet he has almost matched the amount of pitches he has seen that were low and away and out of the strike zone. That is an impressive testament to pitchers simply not wanting for Stanton to beat them. The low away corner in the zone has also increased in percentage seen, as has the zone above that low-and-away zone out of the strike zone. Pitchers are throwing Stanton heavily to the outside and daring him to beat them.

Stanton is getting more pitches out of the zone, but the overall numbers show that he has not been offering more often at those pitches. The heat maps from last year and this year show that as well. Here is his 2012 chart. 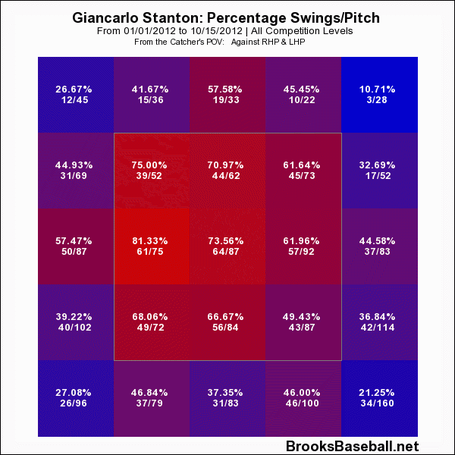 Compare that to his 2013 season's chart. 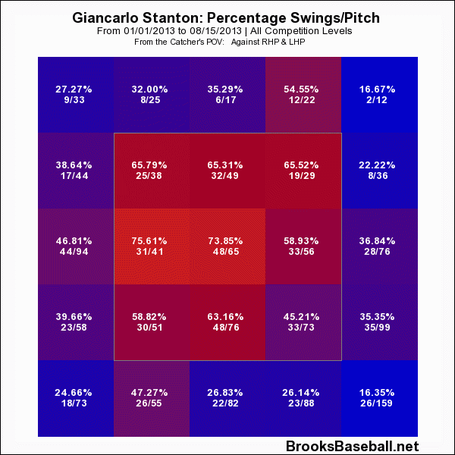 Except for the zone low and in right below the low inside corner, Stanton has certainly dropped his swing rate out of the zone and especially low and away. Sure, those pitchers are tossing a lot more pitches in that direction, but he has made a conscious effort to avoid falling for that trap.

The issue is that Stanton is actually taking more pitches in the strike zone too, which represents a more patient approach but one that will yield more called strikes as well. While one might think that Stanton would start jumping on in-zone pitches more often because he is not seeing them, it turns out he is just telling himself to be more patient rather than necessarily selective.

The whiffs in those zones also look improved this season, which means that Stanton has been making more contact in addition to being more selective in his swinging as well. Here's his 2012 chart. In this case, more blue and darker colors is better, as it represents a lower whiff rate. Stanton is making slightly better contact on those pitches below the strike zone. There is, however, a difference in his performance up in the zone, as he is whiffing more often in the rare times he does get a pitch up there.

The power has been disappearing though, but if the problem is not in Stanton's pitch selection, then where is it? He certainly is not making great contact on pitches that he crushed in 2012. In 2012, he hit a good number of fly balls in a number of areas in the zone. Those pitches in the middle of the zone all the way towards him were usually places where he could lift a ball in the air. He was also to better handle pitches up in the zone, lifting them at a decent amount.

This year, however, Stanton has been missing those pitches up in the zone and pounding the rest into the ground more often. This chart is notable for the small samples in each of the zones and for more blue and dark coloring than the old chart. He is not getting lift on those pitches in the middle of the zone that he crushed just last year. Of particular note is the pitch inside on the hands; last year, he hit eight fly balls and a line drive in 23 balls in play on those pitches, but this season that is down to two fly balls and one line drive in 19 balls in play.

How indicative is this? The last analysis is too limited in sample size to tell much, but if we wanted to correlate that with a mechanical issue, there is a possibility that this has to do with bat speed. If Stanton's swing was getting longer than it was last year, then he may be having difficulty getting around the inside pitch and, instead of lifting it with authority a la Miguel Cabrera, he is lazily tapping it to the infield or failing to make contact.

Looking at these side-by-side (apologies for not being able to look at both at the same time), there doesn't appear to be a whole lot of difference between the 2013 (left) and 2012 (right) swings. If we pick the same type of batted ball, it appears Stanton does just as well. Perhaps the issue lies in how often he fails to get around on the pitch.

This is all to say that Stanton's struggles remain something of a mystery. He is failing on pitches deep inside and high in the strike zone, whereas he succeeded on these same pitches last season. Despite the changed approach against him at the plate, it seems Stanton is doing just as well with the strike zone as he was last season, as pitching away to him has yielded more walks and fewer strikeouts so far. The absence of power is the odd part, and that has been tough to pinpoint for scouts and fans, and it probably will stay that way for the rest of the year.