This Day in Marlins History: Andre Dawson announces that he will retire at the end of the season.

On this day in Marlins history Andre Dawson announced his retirement. Dawson capped off his career by finishing where he was born: Miami, Florida.

Share All sharing options for: This Day in Marlins History: Andre Dawson announces that he will retire at the end of the season.

On this date in Marlins History August 14, 1996, Andre Dawson announces that, after 21 years he would retire at the end of the season. Dawson played for four teams over his 21 years, including the Montreal Expos, Chicago Cubs, Boston Red Sox and his hometown Florida Marlins, with whom he finished his career. As Marlins fans know, this was the year before the first World Series run in 1997.

Dawson's career is Hall of Fame-worthy and finally was recognized in 2010, when he the only member inducted that year. Our very own manager of Fish Stripes Michael Jong provides us with a great piece on his induction into the Hall of Fame over at his old site, Marlin Maniac. If you want to view Dawson's acceptance speech, view it here. 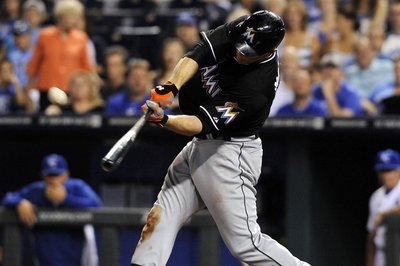 On this day in history, the Marlins released veteran infielder Wes Helms and demote outfielder Logan Morrison to the minors. Both moves were very shocking at the time and sent a message to the Marlins roster.

He started his career with the Montreal Expos, where he went on to play eleven seasons, registering 587 extra base hits over 1443 games while having an OPS of .802. Dawson won the rookie of the year in 1977 by putting up a line of .282/.326/.474 while also stealing 21 bases. To piggyback off of the stolen base statistic, Dawson is one of four players to achieve 300 home runs and 300 stolen bases in their career. The other three men are Barry Bonds, Bobby Bonds and Willie Mays, all coincidentally are related.

Throughout his career Dawson was viewed as one of the good guys and a true professional on and off the field. At the tail end of his illustrious career, Dawson finally made the trip back home to Florida where he grew up to end his career. Over his final two years in baseball he put up a line of .261/.306/.470 to go along with 25 extra base hits over 121 games with the Marlins. This man endured 12 knee surgeries in his career and kept on going. His perseverance shows us that no matter how much your hurting you can strive through anything to play the game you love.